2,890 Successful Adoptions in Over 40 Years of Work 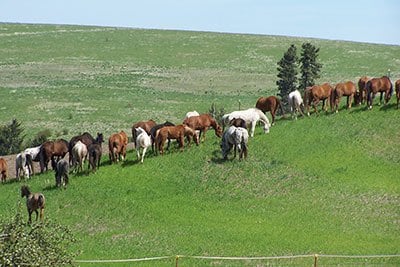 A herd of exotic animals lived next door when he was a child.  With these surroundings, it’s not surprising that Brent Glover acquired knowledge of how to care for numerous domestic and wild animals.  He continued this practice into adulthood by caring for needy animals placed at his doorstep.  One day in 1975, a stranger knocked on Brent’s door asking for “Orphan Acres.”  It seemed he had gained quite the reputation with his local community.  The name stuck and the rescue operation became official.

In over 40 years of operation, Brent and his band of volunteers have seen nearly every size, shape, and breed of horse out there.   He’s also collected a slew of fascinating stories along the way…

For instance, in 1999, a court-order led to the placement of 89 horses to the Orphan Acres herd.  Brent explained, “They were malnourished and neglected for a number of years.  This took our herd to 139 horses to care for, which is the most we have ever had at one time.”  The rescuers were able to revive many of the horses with special diets, and a few were sent to Washington State University for evaluation.  A few were beyond rehabilitation and had to be put humanely down.” 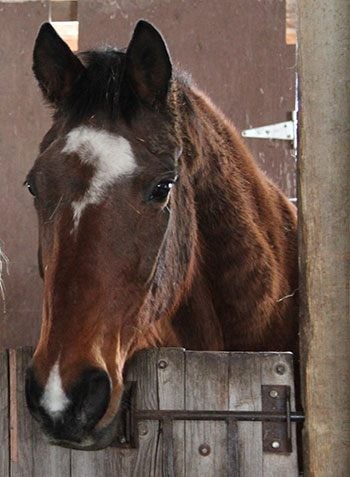 “In 2009, we received another large rescue of 36 horses,” he continued.  “Several of the older horses were unresponsive to rehabilitation.  Three were taken to Washington State University for needed surgeries.  The balance of the horses have been adopted into permanent homes.”

Their most famous rescue was a horse named Lil Blue McGoo, who played one of the main horses in the movie ‘Dances With Wolves.’  “Blue arrived at Orphan Acres severely underweight, with open sores all over his body, and an abscess on his jaw.  He was put on a controlled diet, his sores were treated, and he was given much needed love and attention.  He stood patiently for all sorts of treatments.  We gradually restored both his weight and muscle mass to proper levels.  Blue recovered fully, with the exception of a sensitive digestive system, and spent many happy years with us at Orphan Acres until his passing at 29 years old.”

The farm is also home to other minor celebrities including “Slew”, a Seattle Slew grandson and, “Miss Dee”, who was nominated for the Triple Crown in her hay day but was pulled at Churchill Downs due to blood in her lungs.  “We have had numerous champion Arabian mares and stallions that ended up at Orphan Acres due to their senior age or owner health.”

“Also, unique to Orphan Acres is a herd of blind horses.  Five are totally blind and there are several that are blind in one eye.  They are guided by Zanzabar, who dotes over them as their bell horse.

Since 1975, Orphan Acres has received horses from as far away as Maine.  Their adoption statistics are staggering.  “Over 4,100 horses have been placed here, and about 2,890 have been adopted into new caring homes, giving them a second chance.  We have also had over 360 wildlife placed in our care, all of which were returned to their natural habitat after rehabilitation, including deer, elk, bear, raccoons, raptures, and waterfowl.”

All of this work has been completed without the benefit of a dedicated paid staff.  “Orphan Acres is a 100% volunteer organization that averages close to 10,000 volunteer hours per year by over 800 volunteers.   Those with horse experience spend time helping rehabilitate, and teach the horses to trust humans again.  The horses learn to trust through frequent exposure from the positive interactions with the volunteers.  Learning occurs on both ends of the leadrope.”

To learn more about Orphan Acres, check out their website or Facebook page.  They are always in need of monetary donations and feed to care for their animals.