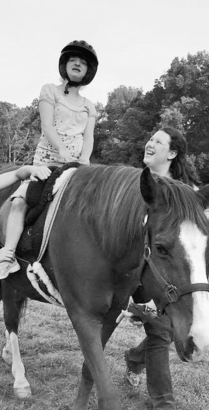 Janna Griggs started volunteering at Saving Grace Farm in 2002, then became part of the staff two years later. When the property was sold and the organization was at risk of closing, she moved Saving Grace Farm to her home, where, with the help of a few volunteers, she kept it going for 3 years. She is now the Executive Director and by saving Saving Grace Farm, has also saved countless individuals and families.

It’s all worth it for the children and families that so greatly benefit from the programs offered at Saving Grace Farm. Janna says, “Nothing can compare to giving a child who is unable to walk, four legs and the chance to fly.”

One little boy came to Saving Grace Farm when he was four years old. When he started riding, he only had about a ten-word vocabulary. He was very behind for his age, but after playing games and working on riding exercises that encouraged him to use his words, he improved by leaps and bounds. Within a month he could identify objects without prompting, and after three months he could say what he wanted and even direct part of the lesson. After a year and a half at Saving Grace Farm, he was socially interactive and could talk in complete sentences.

But the most touching moment happened in the very first lesson. His mom was standing on the side, and as Janna walked him around the ring, she told him to wave and say “hey mommy.” He repeated perfectly and tears streamed down his mother’s face. That was his first time saying mommy, ever.

Saving Grace’s programs bring hope to not just the parents, but also to the children who have special needs and disabilities. Janna has plans to expand their reach through an Equine Facilitated Psychotherapy Program that is expected to start in 2020. They also offer therapeutic riding lessons and a program called “Mounted Warriors” - absolutely free for active duty and retired veterans.

A variety of horses work in the programs - right now they have one Quarter/Welsh pony, two Quarter horses, an Appendix, and a Tennessee Walker. The horsed are free-leased, so some stay for a while and others are just there for a short time. Janna has found that this system works well for their programs, and all the horses are given special love and care.

You can support Saving Grace Farm by donating or sponsoring a rider, volunteering, or donating to help buy hay for the horses. Check out the website below to learn more and to make a contribution.