Is your beautiful green pasture actually a field of poisonous plants? Like it or not, there are a lot of dangerous plants out there that could cause serious harm – or even death – for your horse.  That’s why it’s important for you to understand and be able to identify the top criminals of the plant world lurking in your pastures.

In this article, we’re going to take a look at the worst of the worst.  We’ll explain why each plant is so dangerous and share some ideas for how you can protect your horses from danger.  The act of poisoning should be left to spy movies and action thrillers.  It has no place on your farm!

Without further ado, here are the top poisonous plants lurking in your pastures: 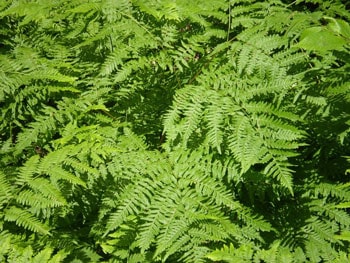 Most toxic plants taste gross to horses, but not this one!  Some horses actually love to eat the bracken fern, so it’s a good one to know right from the start. This perennial fern tends to grow in clumps in moist open areas and woodlands.  Leaves can reach heights of two or three feet.

Your horse would actually need to eat hundreds of pounds of it to start experiencing ill effects.  But that’s not out of the question if your horse has access to the plant and enjoys the flavor. That’s why you need to keep it out of your pastures.

After eating too much of this plant, horses will experience vitamin B1 deficiency which leads to neural dysfunctions.  This shows up as depression, incoordination, and even blindness.  Your vet will likely prescribe large doses of thiamin over the course of one or two weeks to help your horse recover. 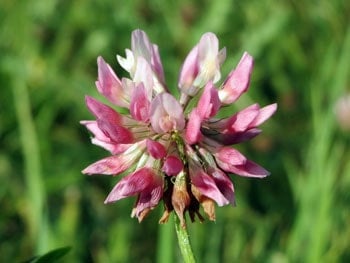 The rabbit from the movie Bambi sure enjoyed eating clovers, but your horses should stay away. There are several kinds out there, but alsike covers cause horses to experience blistering on their light colored skin (photosensitivity) and liver disease.

Red and white clover, which looks very similar, can also be a problem for horses.  The plants themselves aren’t a problem, but they are often infected with a black patch fungus which can cause excessive drooling known as the “slobbers!”

Your best defense is to watch your pastures for either of these plant types and try to promote the growth of grass instead. 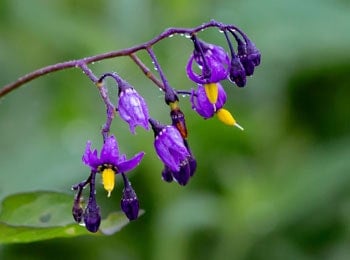 It grows best in sandy soil and dry conditions and has a bell-shaped purple flower and small, round fruits. After being eaten, symptoms will include colic, loss of muscle control, neurological signs, dilated pupils and even death. 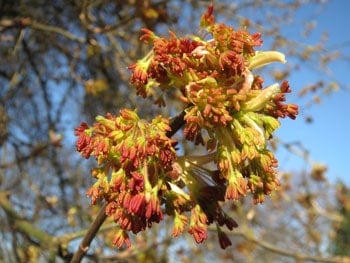 For this plant, only the female plants are dangerous!  That’s because the seeds from female box elder maples cause an equine muscle disease called Seasonal Pasture Myopathy.  The disease is 75-90% fatal, so it’s definitely not something to take lightly.

Symptoms of box elder poisoning include tremors, weakness, dark urine, rapid breathing, and death.  All of this can occur within 48 hours of poisoning. 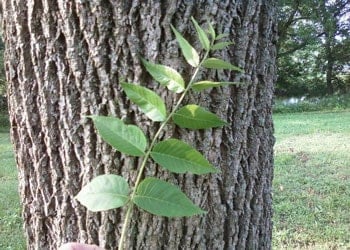 Did you ever think about what kind of wood is used in your horse’s stall shavings?  Well, if the wood shavings include black walnut wood, you’re in for a problem.  Horses bedding on shavings containing black walnut develop edema, colic, and laminitis.

By the way… if you need to cut down a black walnut tree in your pasture, be careful to clean up the sawdust left behind from your chainsaw! 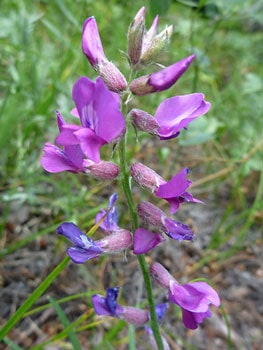 If you live in the West or Southwest, be on the lookout for this “crazy weed.”  After being poisoned, horses will certainly act crazy – bobbing their heads, using exaggerated high stepping gaits, or even staggering and falling down. There’s no treatment for advanced locoism, so you can only hope your horse hasn’t eaten too much.

This plant is so dangerous because it contains a chemical that disrupts the function of brain cells. There are six species and they are leafy perennials with tuft-like compound leaves. White or purple flowers are also easy to find. 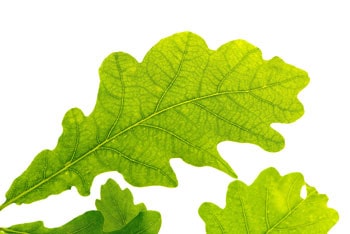 Oak trees are incredibly common, but don’t let your horses eat the leaves!  Often, horses will only eat from an oak tree if they are very hungry and there is no other food available.  Water can also be contaminated by fallen leaves.  Signs of oak leaf or acorn poisoning include colic, diarrhea, darkened urine and depression.

This evergreen shrub with 3-10 inch leaves and clusters of flowers may be beautiful.  But eating only 30 to 40 leaves can be deadly to your horse!  The main danger is to your horse’s heart.

Oleander is common in hot climates and is used in landscaping across the southern United States. Several hours after ingestion, it will cause colic, difficulty breathing, tremors, and an irregular heartbeat. Luckily, horses can survive if they are treated early.  Your vet may feed activated charcoal or drugs to stabilize your horse’s heart. 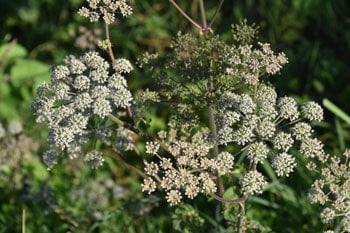 This perennial weed has toothed, fernlike leaves and small white flowers.  You’ll also find purple spots on the stems near the base of the plant.  It grows along roadsides and other open areas where your horse might decide to graze.

It only takes four or five pounds of this plant’s leaves, stems, or seeds to kill your horse.  That’s because it contains several potent neurotoxins that affect your horse’s central and peripheral nervous symptoms.  Lucky for us, horses tend to avoid this nasty weed.

This next plant is actually considered one of the most toxic plants in the country! It grows throughout the United States in marshy areas of meadows and along streams.  Less than one pound of the leaves and stems can be fatal.

Water hemlock is a perennial weed with six feet long stems and umbrella shaped clusters of white flowers at the tips.  It contains a toxin that affects the central nervous system.  Poisoning causes things like excess salivation, dilated pupils, nervousness, fast breathing, seizures, and convulsion.  It acts quickly with death within two to three hours.

We sometimes use the cooked berries from the pokeweed plants in tasty pies.  But that doesn’t mean your horses will get the same enjoyment.

These tall plants are found in rich, disturbed soils like barnyards, moist woodlands, and pastures.  The whole plant is moderately toxic to horses, but the roots cause the biggest problem. Symptoms include colic and diarrhea and with convulsions. 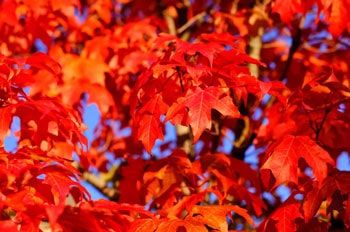 When autumn rolls around, red maple trees provide a beautiful scene across the Eastern half of North America.  Fresh, green leaves aren’t a problem for horses, but wilted leaves – from a fallen branch or autumn leaf fall – are another story!

The maple leaves contain a toxin that breaks down red blood cells so they can’t carry oxygen.  Even as little as 1-2 pounds of the leaves can be fatal or cause damage to the kidneys, liver, and other organs.

Look for signs of lethargy, refusal to eat, dark urine, pale gums, increased respiration, rapid heart rate, and dehydration.  Your vet will provide lots of intravenous fluids and possibly a blood transfusion to reverse the effects.

It’s a common landscaping shrub but it’s no friend to your horse.  The rhododendron plant is related to mountain laurel and azaleas.  They have high toxicity on all parts of the plant and can cause stomach irritation, abdominal pain, unusual heart rate, convulsions, coma, and death. 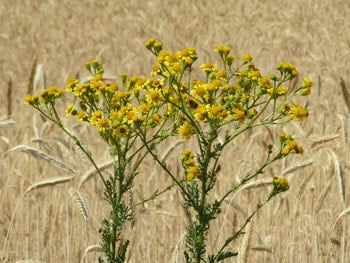 This next weed is a danger to your horse’s liver! Tansy ragwort is a multi-stemmed weed that produces clusters of small flowers that look like daisies.  There are actually 70 species of this plant in the US and are common in pastures and along roads.

If your horse munches on this plant day after day, they will eventually have serious problems.  It takes 50 to 150 pounds to cause irreversible damage.  Horses may show signs of photosensitivity, lowered appetite, weight loss, depression, incoordination and jaundice as symptoms. There’s no treatment for advanced stages of liver disease so don’t let your horse get into this one! 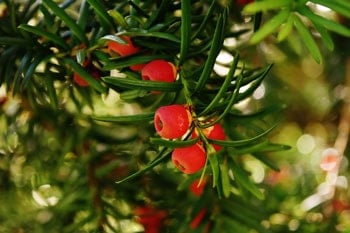 We can’t write this article without mentioning this deadly plant.  Just a single mouthful from a yew plant can cause sudden death. This woody evergreen shrub has needlelike leaves and bright red or yellow berries with a hole in the end. It’s often used as an ornamental plant.

Horses are most often poisoned with yew after people trim their shrubs and throw the trimmings into a pasture.  The leaves and berries contain a chemical that causes cardiac collapse, so avoidance is critical!

How to Prevent Poisoning from Toxic Plants

After reading through the list above, you can see that many of these plants don’t give you a lot of time – if any time – to react and save your horse.  That is why prevention is key.  Get to know the poisonous plants in your area of the country and keep them off of your farm.

Most toxic plants don’t taste very good, so your horse would need a very good reason to eat them.  So, keep your horses well fed so they don’t go searching for extra snacks.  Also, be sure to watch your hay and feed carefully to make sure that toxic plants are accidentally mixed in.

If you suspect that your horse has ingested a poisonous plant, call your veterinarian immediately for advice.  Also, make sure your horse can’t continue to feed on the plant while you wait for your vet to arrive.  Factors like your horse’s age, the amount of the plant eaten, and how recently your horse ate their regular feed will influence the effect of the toxins on their system.

In the end, it’s up to you to keep these dangerous plants from invading your farm.  Educating yourself is a great first step!

10 Most Poisonous Plants for Horses

10 Plants and Chemicals That Are Toxic to Horses:

Panic Or Procrastinate? What To Do if Your Horse Has Eaten a Poisonous Plant: