“90% of the horses have come to Dreamchaser untouched by humans.”

In 2002, Susan Thompson made a shocking discovery that changed her life and the lives of many horses being used by the pharmaceutical industry.  After discovering that Premarin, a medication she had been taking for 28 years, was made from conjugated equine estrogens, she decided that she needed to do something.  The mares and foals she acquired had to be purchased, or “ransomed” as she says, before they could be moved to her rescue, then in Arizona. 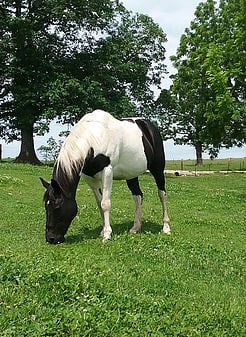 Susan moved Dreamchaser Rescue to Missouri in 2014 to “give the horses more grass” and her rescue efforts have only expanded. While the majority of her mares come from the Premarin industry, she also provides sanctuary to horses from feedlots, failing rescues, wild horse rescues, city and county seizures and Bureau of Land Management auctions.

“90% of the horses have come to Dreamchaser untouched by humans,” Susan says which explains why the training and feeding programs are long processes, customized to these horses particular needs.  Feeding starts with hay, followed by the gradual addition of alfalfa, beet pulp, rice bran and senior feed as necessary.  Training for these horses demands an incredibly patient approach, which often requires the horse being gentled before it can be touched by humans.  From there the horse moves to being haltered and led. Then staff is able to pony them off another riding horse in order to expose them gently. “Generally these horses are with us at least one year,” says Susan of the process.

Dreamchaser includes humans in their process as well, educating women and health care professionals about Premarin and teaching horse husbandry to groups of all ages. “We can remove the fear that so many have, both human and horse, due to bad experience and create a love affair that lasts a lifetime,” says Susan.

One such love affair came in the form of Mary, who began volunteering at the age of 75. Standing not even five feet tall, she quickly became affectionately known as “Little Mary”. For four years, Mary arrived on Wednesday at 8:30am and cleaned stalls, filled waters and walked horses, often until 5:30 in the evening. “Mary said it was the high point of her week. She loved every one of them,” remembers Susan.

The story of Daisy and her brother, Jimmy, only serves to further illustrate the love to be found at Dreamchaser.  “I got a call late one night of two burros being packed up the Pacific Crest Trail in California.  I drove 16 hours, packed them up and drove them back,” Susan recounts. Daisy was lame on all four feet, suffered from laminitis and was severely malnourished. “My vet couldn’t believe the will to live that Daisy exhibited, nor the bond between Daisy and Jimmy.” Five years later, Daisy is happy, healthy and her brother Jimmy is always right by her side.

Please use the information below to learn more about Dreamchaser, or donate in the form of money or time. All of your help is greatly appreciated.