Home / Blog / What is a Gelding Horse? History, Benefits, and Procedure
Back to List of Topics

What is a Gelding Horse?

A gelding horse is a male horse who has been castrated so he can no longer breed and produce offspring.  This procedure also makes him less aggressive, safer to ride, and easier to handle.

It’s similar to having your male dog “fixed” so he stops “making friends” with the pillows in your house. In this article, we’re going to explain the history of gelding horses, and why many horsemen continue this practice for safety and performance reasons.

Why Are Horses Gelded?

Many people take it for granted that humans can control horses with the use of bridles, halters, and ropes.  But, don’t forget… a horse is a 1,000 to 2,000 lb animal filled with pure instinct and muscle!  Many stallions are high energy, aggressive around mares, and generally hard to handle.

Why geld a horse? Well, stallions come with all sorts of safety rules and fine print. I’ve visited barns where only certain people are allowed to handle the stallions.  And you were never allowed to walk your mare in front of a stallion stall for fear he would try to lunge through the door.

Some racing stables even make the lengths of their stallion pastures all the same.  Otherwise, the racing animals would literally run through fences in their drive to dominate. With all this raw male prowess on display, you can understand why it makes sense for some stallions to be fixed or gelded.

In basic terms, this means the male horse’s testicles are removed so they have less male hormones coursing through their system.  What is a gelding’s main benefit? Well, gelded male horses tend to be much calmer, safer to ride, and easier to manage.  In fact, they are often even calmer than mares who tend to be temperamental when they’re in heat.

Racehorses: What is a Gelding and Why are Racehorses Gelded?

An enormous (and practically ridiculous) amount of money in horse racing comes from breeding stallions to mares after a successful career.  So, why would an owner want to geld their stallion and forfeit any potential breeding income?

Turns out, some stallion racehorses are gelded so they can be more easily handled on the racetrack. Then, a successful career for an offspring like this can then boost the breeding career of the horse’s sire who is still standing stud at a farm.  So, the son is gelded so the father can boast of more successful offspring and earn more money.

Then, there’s a situation where a stallion used for breeding is castrated later on in his life.  Again, this is usually done so he can live peacefully with other horses.  Or, it might be done if he is not performing well as a sire and is not used much for breeding.

Read More: The Racehorse Expense [How Much Racehorses Cost]

The history of gelding horses is pretty interesting. First, do you remember the Rohan warriors from J.R.R. Tolkien’s Lord of the Rings?  These horse people dominated the planes and horses were a huge part of their culture.

Turns out, the real life horse warriors were called the Scythians and they lived in Central Asia from the 9th to the 7th century BC. They gelded their stallions to be used as war horses because they wanted animals who would be well behaved, quiet, less aggressive around mares, and easier to keep in groups.

This makes a lot of sense. Just imagine lining up your calvary for war and having an anxious stallion decide that was the time to fight his fellow soldier’s mount! Then, Aristotle mentions gelding a horse in 350 BCE in his writing.  Since then, the practice has been regularly performed for hundreds of years.

Horse Mating in the Wild

Besides having a calmer male horse to ride, some people say that gelding actually helps preserve genetic diversity.  Most sources claim that about 10% of male horses should remain as stallions for breeding purposes.  More extreme views say that less than 1% of males should be used for breeding.

We might find the answer to this debate by looking at how horses behave in wild herds. Typically, just one stallion (with maybe a junior stallion on the fringes) leads a herd of about 10 to 12 mares.  Other male horses are driven off to live in “bachelor herds.”

So yes, nature shows us that only a select few stallions are given the privilege of mating while most male horses are denied that honor.

Not all cultures regularly gelded male horses.  For instance, Arabs traditionally used mares (female horses) for war and everyday work.  Only the very best stallions were used for breeding.  The rest of the males were kept as stallions in bachelor groups away from the mares so they remained calmer and easier to handle. Then, Jewish law forbids the practice of castration so you won’t find geldings within that society either.

The Process of Gelding a Horse

If you have a young colt who may need gelding soon, definitely have a conversation with your veterinarian.  They can help you decide when and how to have the procedure done.

Just remember, it’s a very common procedure that ultimately helps you and your horse work together more safely.  It doesn’t actually harm the horse and he can still live a full and rich life as a gelded horse.

When Do You Geld a Horse?

Really, a horse can be gelded at any age, but it’s commonly done before a foal becomes a yearling and before he reaches sexual maturity.  Some people delay gelding in the hopes that the male hormones will allow their young horse to grow bigger and flashier.  But studies have disproved this idea.

Even older stallions can be gelded so they can be made calmer and easier to handle.  This makes them safer to put out into a pasture with other horses so they can live out their golden years in peace.

The Methods to Geld a Horse

There are two main methods used to geld horses with modern veterinary practices. 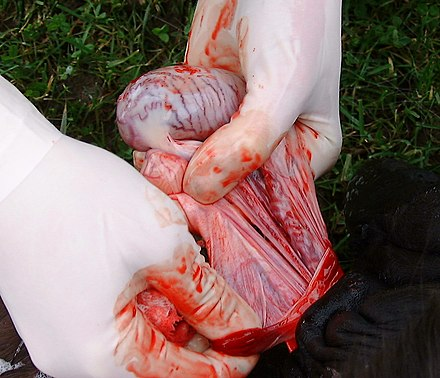 For some horses, standing castration is best because it doesn’t mean the horse has to be completely put to sleep.  Here are the basic steps:

A cryptorchid horse is one where one of the testes cannot be removed.  This horse generally acts like a stallion still.  The main risk with a standing procedure is that the horse will react and injure himself or the vet during the procedure.

Many vets prefer putting a horse completely asleep for a recumbent castration instead of risking the standing procedure.  This also lets the vet control the environment a bit more to prevent infection.  Overall, the procedure is similar to the standing one described above.  The gelded horse does risk some complications associated with the general anesthesia. 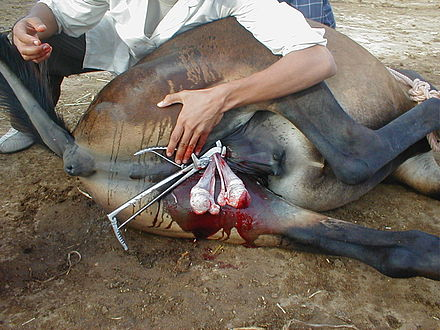 There are some postoperative complications that can arise from the gelding process.  This includes things like:

If you’ve recently had your horse gelded, be sure to talk with your vet to get postoperative care and instruction.

Caring for a Gelded Horse

After castration, newly gelded male horses will not instantly stop their stallion behaviors.  It might take a few weeks for the hormones to leave their system.  The newly gelded horse should be watched carefully, kept clean, and hand walked until they fully recover.

Then, gelded horses often need extra cleaning of their sheath as adult horses. Since they don’t fully extend their penises frequently like stallions, it’s common for oil and dirt (called smegma) to accumulate in the sheath.  This should be cleaned out regularly to prevent irritation.

What makes a horse a gelding?

A male horse becomes a gelding when his testicles are surgically removed.  This procedure helps make horses easier to handle, safer to ride, and allows them to be turned out with other horses without fear of aggression.  That’s because a gelded horse no longer produces as much testosterone as they had when they were still stallions.

What happens when a horse gets gelded?

A male horse who gets gelded has his testicles surgically removed to reduce the amount of testosterone in his system.  The procedure removes the testes, the epididymis and part of the spermatic cord.  A horse who is not gelded is called a stallion and is typically harder to handle and more aggressive.

Can a gelded horse still breed?

A gelded horse can no longer breed and produce offspring.  The veterinarian removes the both of the horse’s testicles along with the structures that support it. This is a similar process to having a dog or cat neutered.

Is a gelding a boy or girl?

A gelding is a male horse who has been castrated so that he becomes calmer, easier to handle, and safer to ride.  Horses who are not gelded are called stallions and tend to display aggressive behavior especially to other horses.  A gelding is a much safer horse for a young or new equestrian to use for riding.

What does a gelding horse mean?

Male horses are either called stallions or geldings. A gelding horse is one who has been castrated to remove his testicles.  This is done to lower the amount of male testosterone in his system so he can more easily and safely be handled. Once gelded, male horses can no longer breed and produce offspring.