“We have succeeded in changing things for the better.” 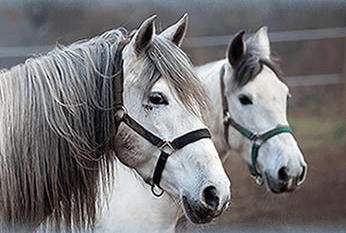 They say that “necessity” is the mother of invention and that seems to perfectly suit the founding of Hope for Horses Rescue.

In early September 2014, a group of women came together to rescue a horse in their neighborhood that had been starving for nearly two years. Right on the highway, in a tiny lot with no food or water, this horse’s plight was on display for everyone to see. Although the horse had been reported numerous times, nothing had been done and the women decided enough was enough. After finally convincing the owner to surrender the horse, General, as he came to be known, became Hope for Horses first rescue.

Hope for Horses grew quickly from that point on, mainly due to the need in their community. Located in a very rural area, they were surrounded by many low income families that couldn’t afford to feed their horses and were simply letting them starve. “We had no resources, no humane society or animal control of any kind. No help from the Sheriff in those heartbreaking cases. We stepped up to do what no one would,” recounts JoAnn Joseph, Hope for Horses Vice President.

Each horse is initially brought to “headquarters”, aka JoAnn’s property, where they are evaluated and started on an appropriate feeding program. The horses remain at JoAnn’s while they receive veterinary and farrier care. This process usually takes 4-5 months, at which point they move to a foster home for care and training. “We have three trainers that we use depending on what the horse needs, from just a refresher to training to ride,” explains JoAnn.

With the support of the community and the election of a new Sheriff, Hope for Horses is now able to work with law enforcement to help on a scale they hadn’t imagined possible. “We work closely with our local law enforcement in this joint effort.  With our facilities now available, officials can investigate cases of animal abuse knowing they have the resources needed to confiscate and relocate endangered animals,” says JoAnn.

Clyde was a shining example of the good that comes from local organizations working with law enforcement. When the Sheriff’s office called Hope for Horses in December of 2014, they were happy to respond. What they found was a young horse in a 9x9 dog kennel with no water or hay, so weak he could barely walk. “He stood knock kneed because he had no muscles to keep him standing,” remembers JoAnn. “A deputy was with us so the owner was glad to sign him over.”  After an inspiring recovery, Clyde is now happy and healthy and was adopted by JoAnn. “He’s so special, I can’t imagine not having him,” she says.

Each horse that comes through Hope for Horses is a reminder of what can be accomplished when a community works together. “We have succeeded in changing things for the better. Horses have starved around here for years. But not anymore,” JoAnn states. Use the information below to find out how you can help this special organization.