"We have now had more than 250 horses come through our facility."

The idea for Horse North Rescue began in 2005, when a group of friends decided there wasn’t enough being done for neglected, abused and abandoned horses in their community. It was initially a local effort to provide horses in need with a safe spot to land, however, it quickly became apparent there was a need to achieve non-profit status in order to raise funds to help more needy horses. “Since 2005, we have had more than 250 horses come through our facility,” states Anita Ennis. 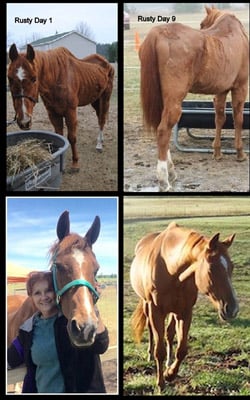 One of the many horses to receive Horse North’s care is Rusty, who arrived on December 5th, 2014.  Rusty’s journey to Horse North started in November when a local horse owner saw an  emaciated horse while driving home and called Animal Control.  “She became Rusty’s advocate and wouldn’t let the matter rest,” recounts Anita. “Rusty was lucky to have survived his former “home”, he was so emaciated he barely had the strength to step up into the trailer.” Rusty’s road wasn’t an easy one, he was placed at a body score 1 and his teeth were in such poor condition he could only eat soaked hay pellets.

However, Horse North’s volunteers wouldn’t give up on him. “Our volunteers had sleepless nights when he showed signs of colic and hours spent in frigid cold checking on Rusty to ensure he received everything he needed,” says Anita. Their efforts did not go unrewarded, Rusty recovered and is now a spunky, happy, healthy boy. “Rusty worked his way into the hearts of all our volunteers, especially Deb, who ended up adopting him,” says Anita.

Horse North Rescue accepts all breeds and ages from seizure cases, however, the rescue limits how many rescues are taken in through owner surrender because of space concerns and replacement ability.  The goal is to educate owners on responsible horse ownership, help them get the resources they need to be a successful owner and offer advertising assistance if re-homing is necessary. Horse North also receives horses through Animal Control, like Rusty, which are severely emaciated and untrained. They have assisted with seven of these seizures, four in the summer of 2017. “These horses were all on the brink of death,” remembers Anita.

Every horse is evaluated by the veterinarian, vaccinated, given teeth floats as needed, and started on a feeding regimen.  The horses are also seen by Trent Smith, the facility’s farrier, who donates his time helping the rescue.

Each horse’s abilities are assessed with a variety of activities, including haltering, leading, neck flexion, yielding hindquarters, saddling, etc. If the staff is confident that a horse has been ridden in the past and is ready, it is sent to a two-week riding refresher. “We have found a trained horse has a much higher success rate of adoptability, as well as long-term success in a new home,” say Anita. “Horses are then available for adoption with a description of their temperament and needs. We do our best to match a horse with a responsible and dedicated adopter.”

Horse North Rescue (Horse North Inc.) serves all of northern Michigan and is 100% operated by more than thirty volunteers.  Use the information below to see how you can donate your time or funds for much needed supplies.