The Story of a Brave Little Donkey Named Ivy

The Horse Plus Humane Society was founded by Tawnee Preisner in 2003 and has rescued an astounding 4,000 equines across three different states.  They are an open door shelter so they accept all breeds of horses with locations in Tennessee, California and Oklahoma.  Horses are given proper nutrition and training from staffed trainers on their road to recovery.

With this organization, we have the unique opportunity to share the details of one brave little donkey's journey towards health. Tawnee described the story of first meeting Ivy at a farm where the owner was charged with cruelty to animals.

Ivy was a small donkey in a paddock filled with mud.  "I've never seen a donkey as skinny as Ivy was and still alive," said Tawnee.  The volunteers were able to load her onto the trailer in hopes of restoring her to health.  "We were really happy when we were able to take her away from the place where she wasn't being cared for properly."

After a cold night, they found Ivy collapsed in her pen the next morning.  She had tried to lay in the sun and couldn't return to her feet.  A makeshift sling and a tractor were used to hoist her to her feet before the vet came to check her over. 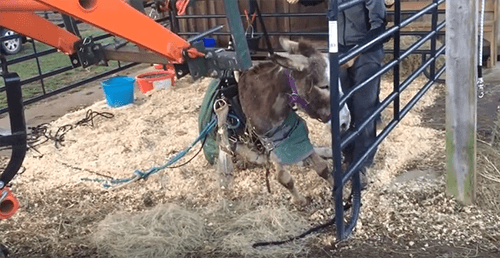 The vet visited that day and said she was 15-18% dehydrated.  She likely would have died overnight if she hadn't been rescued because her body temperature was dangerously low and she was so dehydrated that she wasn't being stimulated to drink.

In the coming days she was able to stand on her own, but the success was short-lived.  They found her in her stall again one more collapsed and unable to rise.  They had to get the tractor out to hoist her up in the sling.  "She kept fighting for her little life there."

The hardest part of helping Ivy was that she absolutely refused to drink.  With every full syringe piped into her mouth, half would come dripping back out.  A full week later, when she started to drink on her own, they were really excited. 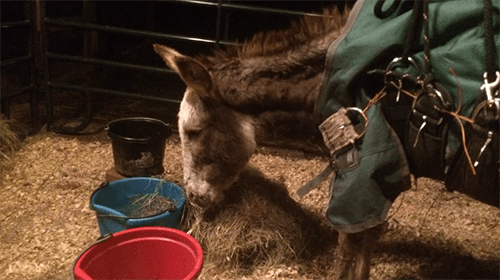 To help raise Ivy's spirits, a previously adopted donkey was brought for visits.  "It definitely perked up her interest to have another donkey there."  Days past and Ivy was finally able to go for a short walk.  She managed to go about 30 feet before collapsing into the grass.  Tawnee remembered, "She was so scared that she fell.  I could hear her heart pounding.  She had given everything should could." 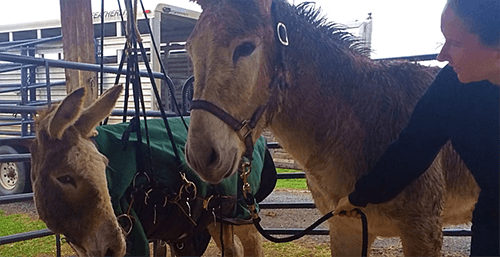 Once again, the tractor was used to hoist her up and return her to her pen.  The workers held hope that she could one day find the strength to stand on  her own, but they were starting to really worry.  Tawnee paid Ivy a great deal of attention including vigourous massages that made her lips twitch in enjoyment.   "Ivy's had just this little spark of life and zest." 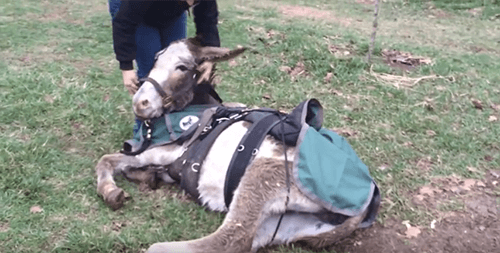 A new action plan was established to help Ivy walk.  She now had to take a few steps to get grain on her own.  "We kept moving her bucket.  She wasn't very happy with us, she would glare at us."  The other donkey continued to visit when he could.  "Whenever Brighty was there she would work extra hard.  Still there days in pasture when she couldn't get up after lying down to rest." 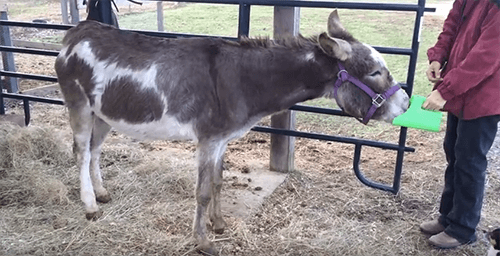 Over time, Ivy and Tawnee went on walks that got longer and longer.  "It was exciting to watch her gain her strength."  Tawnee's most exciting moment came one day when she saw Ivy lying in the pasture and walked out to check on her.  As Tawnee got closer, Ivy triumphantly climbed to her feet and let out a bray of joy!    "It was such a huge victory for her!"  She was finally able to stand up on her own. 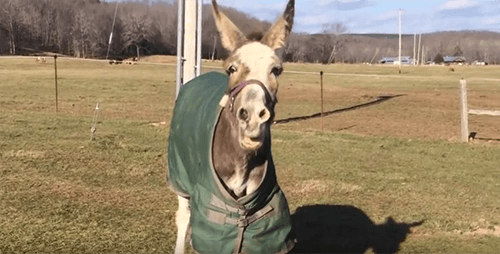 Ivy's recovery story is not complete, but Tawnee and the workers at the Horse Plus Humane Society are extremely thankful for all of the donations and support that they've received.  To learn more about the location in your area, check out the websites below.