What is a Palomino Horse?

Affiliate Disclaimer: We earn from qualifying purchases through our links but this does not influence any product evaluations or recommendations on our website.

Palomino horses are perhaps the most eye-catching type of horses. With their beautiful golden coats and blond manes, it’s no surprise golden palomino horses have been the stars of movies and TV shows and the favorite horses of the rich and famous.

These horses have a special place in my heart because of my mom. When my mom was in her teens, she owned a beautiful palomino horse. I grew up hearing my mom tell stories of her riding adventures, and to this day, every time I see a palomino horse it makes me think of my mom riding through the fields with her stunning golden horse.

But palomino horses aren’t just beautiful – they can also be extremely smart. And they have a rich history full of interesting facts and surprising tales. You’ve probably heard of some famous palomino horses, or seen them in movies or on TV.

Trigger – The Smartest Horse on Television 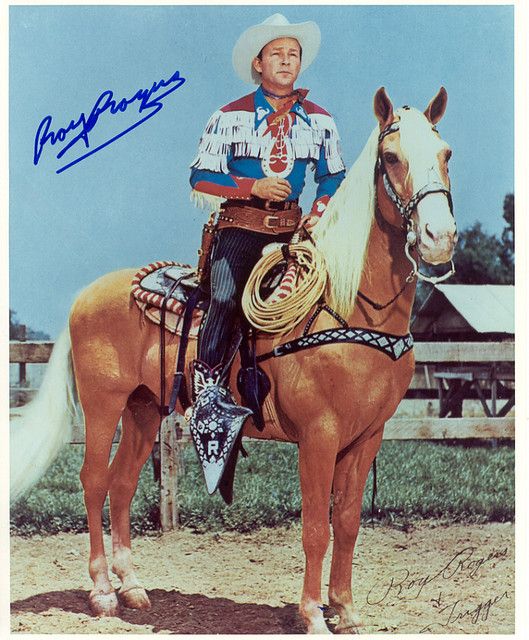 The most famous palomino horse is probably Trigger, the star of many classic old western films. He starred in 81 movies with his owner and co-star Roy Rogers, and also appeared in TV shows. He appears in famous old westerns like The Adventures of Robin Hood and Man from Cheyenne.

Trigger was 15.3 hands and had a beautiful golden coat. But aside from his stunning looks, he was also incredibly smart and well trained. He knew over one hundred cues – including walking on his hind legs, sitting in a chair, going to sleep and coving himself with a blanket, and he could even sign an “X” for his name!

But his greatest accomplishment – he was potty-trained! His owner Roy decided that since Trigger spent so much time in hotels, theatres, and on movie sets, this ability was essential. Trigger was spectacular. He was a total movie star – he even knew how to bow on cue when he heard applause.

Trigger might be the smartest palomino horse, but he isn’t the only famous one. Maybe you’ve heard of Mr. Ed, the talking horse from a funny TV show called “Mister Ed” that aired in the 60s. Another beautiful palomino horse movie star, Mr. Ed was a witty golden horse that would constantly poke fun at his owner Wilbur. This palomino movie star was also super smart – Ed learned to move his lips on cue when his trainer touched his hoof to make it seem like he was talking.

During the first few episodes, they had to use a nylon thread to move Ed’s lips. But he was a fast learner and soon was able to move his lips with just a subtle cue from the trainer. Alan Young, who played Ed’s owner, even said, that Ed “soon learned to do it when I stopped talking during a scene! Ed was very smart.”

Another famous palomino horse is Argo from the 90s TV series, Xena, Warrior Princess, who was also extremely well trained. The actors said that she was super smart, always responded to Xena’s whistles and understood all the commands she was given.

Add the complete series of Xena, Warrior Princess to your collection here.

These four-hooved movie stars impressed millions of viewers with their beauty, brains, and charm. Despite their popularity, many people don’t know much about palomino horses. In fact, there are many common misconceptions about these beautiful horses.

Is Palomino a Horse Breed?

The most common mistake people make when talking about these types of horses is calling them a palomino horse breed. Similarly to Buckskin, Palomino is a color, not a breed of horse. Palomino horses have a light-colored coat – usually gold or yellow – and a white or cream-colored tail and mane. There are some variations of colors for these types of horses, and the darkness or lightness of the colors can differ.

What Breeds Can Be Palomino Horses?

Some breeds cannot be palomino horses because they do not carry the dilution gene that creates the palomino color. Haflinger horses usually have a light coat and a white mane and tail, and many people confuse them for palominos. But, actually, Haflingers are one of the breeds that doesn’t have the dilution gene – so it’s impossible for them to be palominos!

History of the Palomino Horse

Researchers have found descriptions of beautiful palomino horses that date back to ancient empires hundreds and hundreds of years ago in ancient Greece, Rome and Mongolia. Legend has it that Pegasus, the famous flying horse from Greek mythology, was a palomino horse!

But when did horses first start having the palomino color? Well, it’s a mystery. No one knows whether the palomino color has always existed as a coat coloring or if it evolved because of the environment or a genetic factor.

One theory is that horses that lived in desert areas evolved and developed the dilution gene to better endure the hot sun and extreme temperatures. Horses that have a black or dark colored coat absorb the sun’s rays and can overheat much quicker in hot temperatures. Light colored horses like palomino horses can reflect the heat and perform better in desert environments.

She even sent six palomino horses to the New World – one stallion and five mares. There, the horses passed on the dilution gene to their foals and the palomino color spread more and more.

Here’s a great book about palomino horses that you can add to your library today.

These are probably the most commonly recognized type of palomino horses. They have a dark yellow coat and a beautiful white mane. Golden palomino horses can change colors also – in the winter their coat will get lighter and, in the summer, the richer golden color will return.

Most palomino foals are born with a very light, almost white coat. Light palomino horses stay a light cream color for their whole lives. Many light-colored palomino horses have such light skin that they can be confused for cremello horses. How can you tell the difference? Just look at their skin – light, sandy colored, palomino horses have brown skin while light colored cremellos have pink skin.

This palomino horse color is a rare find – few horses have the pearl gene that produces the shiny, pearly cream color. These horses are very unique and they often have blue or green eyes as well. If you want to breed a pearl palomino, Andalusian and Lusitano horse breeds are a good bet for getting the pearl gene.

If you’re looking for a dark palomino horse, you’ll love the chocolate palomino color. This color is the darkest on the palomino horse color spectrum and it’s a truly spectacular combination. These horses have an ashy brown, milk chocolate colored coat and a white mane speckled with brown or black hairs. They are also a rare palomino color and can be very hard to find.

Chocolate, pearl, light, and golden are the four main palomino colors – but there’s also a fifth color that isn’t actually a true palomino. That’s because instead of having the dilution gene, it has the champagne gene.

Diet has a huge influence in your horse’s coat maintenance. Feeding your palomino horse a diet that’s high in protein can create round patches of hair (called dapples) that are darker or a different color than your horse’s coat. To avoid this, make sure that your horse has just the right amount of protein and avoid feeding them too much alfalfa hay.

Read More: The 5 Best Types of Hay for Horses (And 1 type of hay to NEVER feed your horses!)

How to Breed a Palomino Horse

Essentially, each horse has two color genes, a dominant gene and a recessive gene. That means that even if you breed two palomino horses together, you won’t always get a palomino horse all of the time, because sometimes the two recessive genes can come together to create a different color.

If you want to try to breed your horses to create one of the specific palomino colors – like golden, light, pearl, and chocolate – you’ll have to have a slightly different combination, and even then, it’s a little bit trickier. For example, to create a chocolate palomino, you can pair a liver chestnut horse with a palomino, but even then, your chances of getting the color you want aren’t guaranteed.

That’s what makes palominos so special – these special combinations are rare, meaning these palomino horses are truly unique.

Do all palomino horses have a gold coat?

What is the temperament of palomino horses?

Since palomino horses can be many different types of breeds, the temperament depends on what breed the horse is. Most palomino horses are quarter horses, and this breed tends to be hard working, intelligent, eager to please and highly trainable.

Why does my palomino horse’s coat change colors?

Your palomino horse’s coat can change colors depending on the temperature or the time of year. For example, in the winter their coat can become one or two shades lighter than the normal summer coat. A horse’s diet also affects the shininess and color of his coat. Feeding your horse hay or grains high in protein could darken your horse’s coat, and some minerals can cause a tinted color in your palomino’s mane.

How did palomino horses get their name?

The name palomino probably comes from the last name of Spanish conquistador Juan Alonso Palomino. He was given a beautiful golden colored horse while in the Americas, and he named it Palomino, after his family name.  Since there were few golden colored horses, people started calling these types of horse’s palomino horses.

What color horses do you breed to get a palomino?