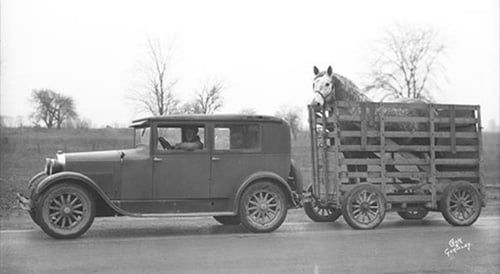 Throughout much of history, men depended on horses to carry them to town, pull their plows, and drag carts loaded with goods to the market.  It took hundreds of years, but eventually the day came when the horse’s status switched from that of a labor animal to one of recreation and value.  Suddenly, people wanted to spare their horses from walking long distances and the horse trailer was born!  Here are 13 facts and photos dug out of the vaults of horse trailer history.

1.  When it comes to horses of extreme value, we need to look no further than racehorses.  It’s the sport of kings and it seems fitting that our first story features one of the most famous racers.  Eclipse was a legendary undefeated British racehorse in the 18th Century.  His stud career was so successful that 95% of modern Thoroughbreds carry his genes.

Back in 1771, he also became the first horse to be shipped by a horse trailer!  At the time, he was not able to travel to stud because his feet were so bad, so a carriage was “purposely constructed” to help him fulfill his sire duties.  The carriage was horse-drawn, so we’re sure the horse in the front was not quite as excited about the historical landmark.  (Source: The History of Horse Racing by Roger Longrigg, 1972, Hardcover) 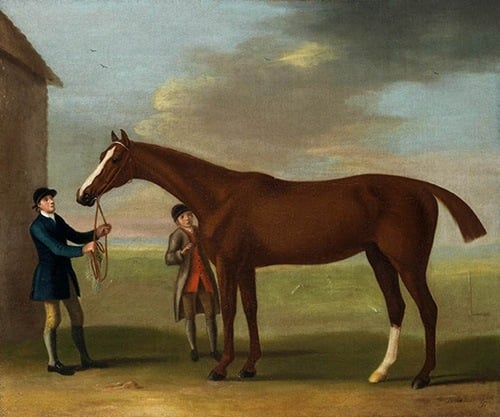 2. If a horse trailer could help a retired racehorse reach the stud farm, it seems even more fitting for the racers to use it to get to the track!  Starting in 1816, some racehorses were transported to the track to "to spare the animal wear and tear of self-propulsion.” (Yes, that’s actually how they phrased it…)

The first known instance of this occurred when a racehorse named Sovereign was transported to the Newmarket Racecourse in England.  They used a modified cattle cart drawn by three strong heavy horses hitched in a “unicorn team” configuration (two at wheel and one in the front.)  The caravan traveled at a rate of 40 miles a day, which was twice the distance typically traveled by a racehorse headed to the races. (Source: The Turf: Social and Economic History of Horse Racing by Wray Vamplew, Published by Viking, 1976) 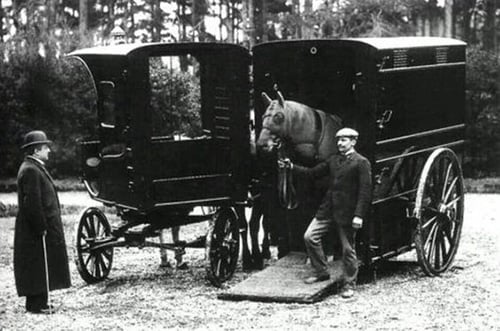 3.  Besides transporting racehorses, many of the very first horse trailers were actually horse-drawn ambulances used by city fire departments.  Horse injuries were common at city accidents and they needed a way to quickly transport wounded but savable horses back to the firehouse for veterinary care. 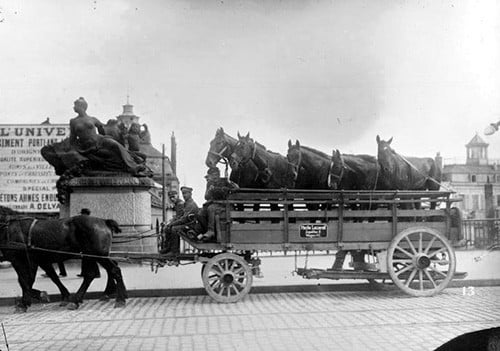 4.  By the time World War I rolled around, even more horse ambulances were needed to transport French infantry horses from the battlegrounds to base hospitals where they could receive care for gun shots and shell wounds.  A special horse ambulance vehicle was created that could rotate on its base so that horses could walk forwards both on and off of the trailer. 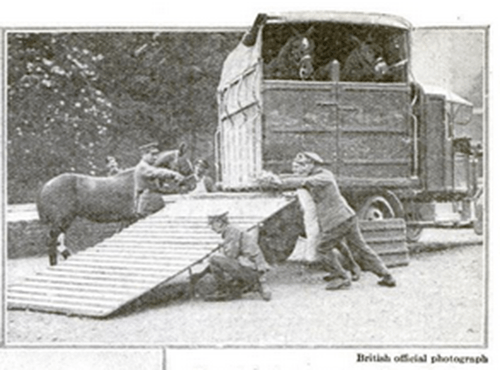 5.  Eventually horse trailers transitioned for horse-drawn to motorized propulsion.  This was certainly a nice change for the unlucky horses that had previously done the pulling! 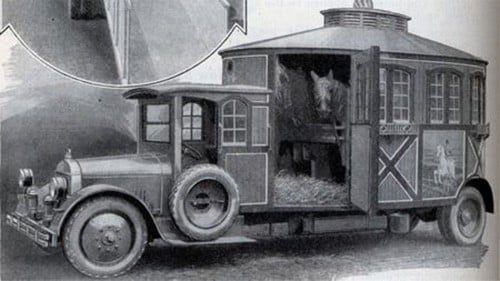 6.  Almost 100 years after the first racehorse walked onto a trailer, Popular Science magazine reported on a novel way to transport racehorses.  The 1918 article described putting three racehorses in a trailer that is fourteen feet long, five feet eight inches wide, and six feet six inches high.  This new method of travel was said to be more reliable than using railway cars.

They boasted of trips made between New York and Baltimore or 203 miles traveled.  A typical horse trailer today is much larger at eight feet wide, eight feet high, and at least twelve feet long. 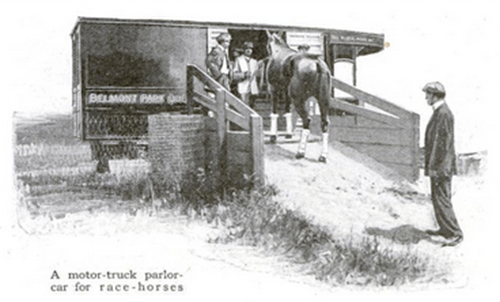 7.  It’s common knowledge that horse can travel by truck, train, or plane, but did you know they could also travel by motorcycle?  Here, a motorcycle sidecar has been modified for a studly Shetland pony in this 1950’s era vintage photo. 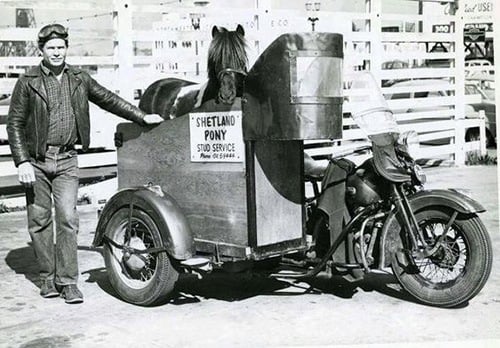 8.  As the decades passed, horse vans continued to be used to transport racehorses and performance athletes throughout the world.  These trailers were known as “horse boxes” in England. 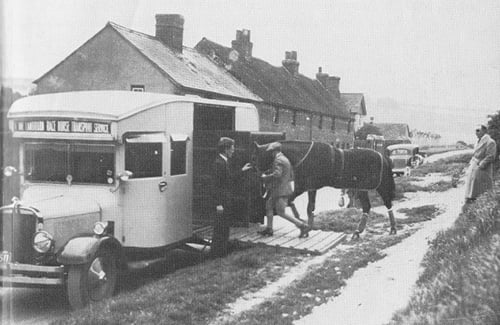 9.  The German company named Westfalia began building trailers in 1927 and expanded their market to box trailers and camper vans.  They had built 25,000 trailers by the start of World War II. 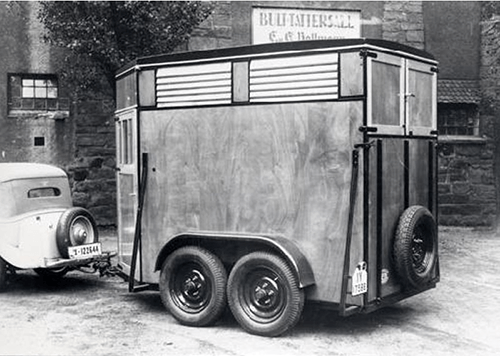 10.  While some parts of the world were progressing to more sophisticated designs, other folks made due with that they had.  In this 1928 photo, a New Mexico man transports his horse across the countryside in a trailer with wooden slat sides. 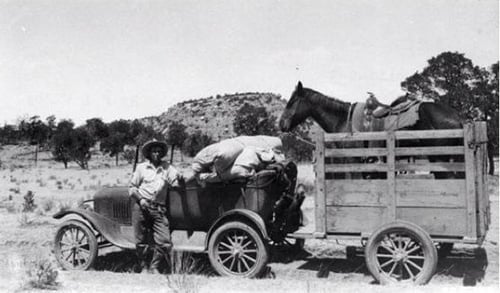 11.  The Texas Rangers are famous for hunting down notorious criminals Bonnie and Clyde in 1934 and later providing inspiration for the Chuck Norris TV show Walker, Texas Ranger.  Just after the great depression, the Texas Rangers continued their patrols with two rifles, car, horse, saddle, and – you guessed it – a horse trailer!.

12.  In 1940, many people adored the “Singing Cowboy” Gene Autry and his faithful horse named Champion.  They traveled from show to show in the fancy trailer shown below.  Champion’s other claim to fame is his status as the first horse to fly coast to coast.  The pair needed to travel quickly from California to New York in time for Gene’s Madison Square Rodeo.  The horse was loaded onto a special designed TWA airliner with all but two seats removed to make room for the horse. 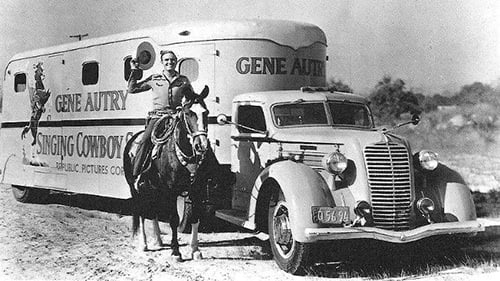 For regular trips, Gene Autry and his horse traveled in style.  Photo Credit 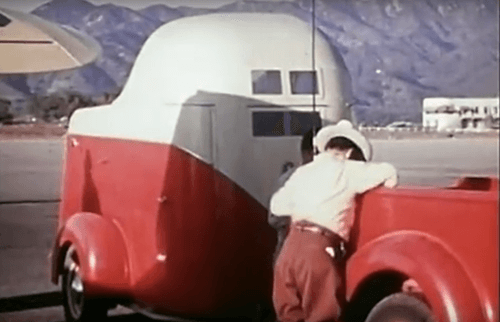 Champion arrived at the airport in this 1940’s one horse bumper pull trailer with an open back.  Photo Credit 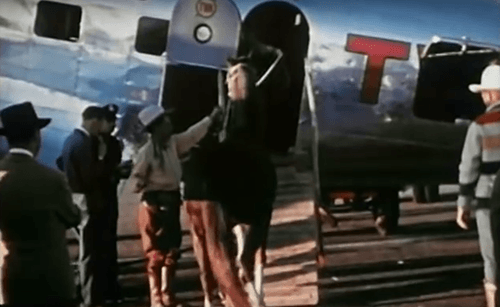 Champion loaded onto the plane fairly easily despite the narrow ramp and low headroom.  Photo Credit

13.  The Budweiser Clydesdales became a well-known American icon when they started delivering beer right after the prohibition was lifted in 1933.  Today, these teams of 10-horses travel throughout the country for exhibitions and public appearances.

Three 50-foot tractor-trailers are needed to transport the horses and equipment and they are on the road 10 months out of the year.  They stop each night at a stable so the horses can rest.  The trailers feature air-cushioned suspension and thick rubber flooring. 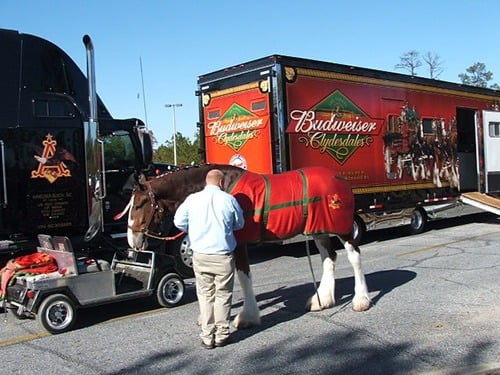 Horse trailers sure have changed in the last 250 years! Today we can enjoy a variety of safety features and amenities that were unheard of in times past.  Improved construction materials have helped to make the ride more comfortable and your horses more protected.  Even in the last few decades, we are continuing to see the horse trailer designs evolve as old aluminum models are being replaced by new stronger composite materials.  All of this is done so that our equine friends can be safe while we haul them all over the place!

Questions:  Do you have any vintage photos or historical facts to share?  Which is your favorite old-time photograph?