Thanks for sharing your inspiring story Carrie.  Good luck with your endeavors and I am sure you will touch the lives of many. 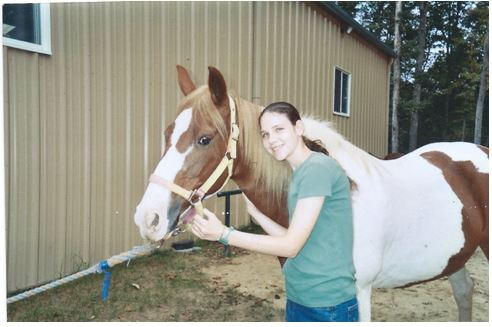 Area of study: I will receive my Associates in Arts degree in May from JSCC.

Ever since I was a little girl, I have been in love with horses. My granddaddy always had horses and I can remember going to his house and brushing them or helping him feed them. As I have gotten older and have been attending college, I have not had as much time to be around horses, but my love for them has not faded. I am currently attending James Sprunt Community College and will graduate from there in May. I plan to attend Campbell University in the fall of 2015 and major in psychology. I want to become a Christian counselor and help people deal with situations that they see as hopeless. I also want to study equine therapy and get an internship where I can combine my education with my love for horses.

I decided to seek a career in psychology because of something I went through when I was a teenager. When I was eleven years old, I was told that I was overweight. It didn’t affect me at first, but as I moved from being a little girl to being a young woman, I began to take to heart what had been said to me. I began to notice things I had never really paid attention to before like my size, what I was eating, and how much I weighed. Overtime, I developed anorexia nervosa, a deadly eating disorder. I barely ate anything, became very conscious of my weight, and was very depressed and isolated. I cared about only one thing: to become as skinny as possible. After several failed attempts of trying to “fix’’ me by going to different doctors and therapists, my parents finally admitted me into the hospital. While I was there, I gained weight, but came home unchanged on the inside.

Things got worse, and I became very angry at myself and everyone else. There were times when I found myself wondering what the point of life was anymore. Things I once cared about, such as horses, became nothing to me.  All I cared about was my eating disorder. My parents finally looked into a private residential treatment center in Virginia called Remuda Ranch.  I was very rebellious about going. I did not want help, and I did not believe I needed help. After a lot of fighting, my parents finally took me to the place they believed could save my life. As my parents said goodbye, I felt weak and abandoned. I was determined to shut everyone out until I could go home. However, things turned out a lot differently.

After having been at Remuda Ranch a few weeks and after resisting everything the people there did to try and help me, I finally broke and could not fight any more. I started to open up and even let myself enjoy equine therapy, which was an important part of the treatment program there. The Ranch had twelve horses that lived in a beautiful barn with several acres of rolling, green pasture. They even had a Double D horse trailer! I remember how I felt when I finally lifted my head up long enough to look out at the pasture and see the magnificent creatures that I once loved so much. I was assigned an appaloosa named Ms. Spot who was the gentlest animal I had ever encountered. At first, I just brushed her and got to know her. Soon, we were the best of friends. After being successful in my treatment program, I was able to start riding Ms. Spot. I learned how to saddle and bridle a horse and how to ride properly. Once I was able to master that, I learned how to ride English style and Ms. Spot and I became inseparable.

Ms. Spot was one of the reasons that I learned how to overcome my eating disorder. She taught me that life is precious and should be enjoyed. She showed me how beautiful life is as we went on many trail rides together. She showed me that no matter what my size, I was still precious and loved. After I came home, I still struggled some with the eating disorder, but had it not been for Remuda Ranch and especially Ms. Spot, I wouldn’t be here today.

I have never received an award or an honor by being involved with horses. However, finding myself again after having been lost for so long through my time at the Ranch and my time with Ms. Spot was honor enough for me.  Even after a thirteen week hospital stay at Chapel Hill and two different stays at Remuda Ranch, I graduated from high school on time.  I have maintained a 4.0 GPA at James Sprunt while holding down a part-time job at Warsaw Animal Hospital. What I have been through and what has happened to me has made me a stronger person and has given me a new perspective on life. I hope to be able to spend time with horses in my future and help people in the process. I love all animals so even though I may not go into an equine related field, any opportunity I have to make sure horses are being taken care of or to support the horse industry, I will gladly do. One of the greatest obstacles that the horse trailer industry faces today is the declining economy.  Many people do not have time and money for hobbies such as buying a horse trailer and going horse-back riding. I believe that this will greatly affect the horse trailer industry.

I want to say thank-you so very much to anyone who takes the time to read this paper. I hope that I have written in a way that is deserving of this scholarship.