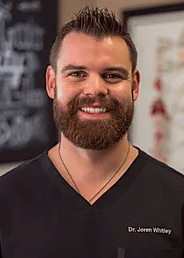 According to Dr. Joren Whitley, he has the “coolest job in the world.”  And honestly, it’s a hard point to argue.  On any given day, this multi-talented chiropractor might see 50 human patients, six dogs, two horses, a goat and a pig. He’s also worked with other four-legged zoo animals like lemurs, chimps, bears, tigers, and even a kangaroo!

For Dr. Whitley, his work allows him to relieve pain for animals who can’t speak up for themselves.  As an added benefit, his animal practice serves as an educational platform to help more humans understand the benefits of chiropractic.

When it comes to horses, chiropractic has a wide range of benefits… from barrel racing to pole bending… show jumping to just plain bad attitudes!  Dr. Whitley laid out his top recommendations to keep your horse performing at their best.  He also talked to us about how horse trailer vibration can cause lasting damage to the spine and legs.  Learn how you can help your horses cope with the physical stress of going for trailer rides.

Hello Dr. Whitley!  Thanks so much for talking with me today. To start, what are the most important benefits horses can see from horse chiropractic?

Sure! Basically what we do is we adjust the spine. We find the areas of misalignment and correct that. That is actually going to make the body function better. But it also will take off any impingement or interference in nerves that go down to the different organs.

As we adjust the body, we're decreasing the stress on the body. Then the body's able to function better. And it's not going to have as much stress on it.

Let's just take indigestion for an example. If the body's stressed out, it doesn't produce the right amount of stomach acid. Then you're getting not getting the right amount of absorption of your nutrients. Now we have malnutrition issues because your body's not functioning like it's supposed to.

When we're looking at horses specifically, we put a lot of pressure on their spine in areas that are dealing with vital organs. Basically that can cause an interference on those organs like heart and lungs.

When we ride, we are putting pressure on the thoracic spine, which is also connected with the ribs. So we're putting a lot of pressure on the ribs and we're asking them to walk or run with extra weight on their back. But they're not able to take a deep breath of air in because their ribs are not moving like they're supposed to.

Okay, so what are some specific problems owners will come to you trying to fix with their horses? 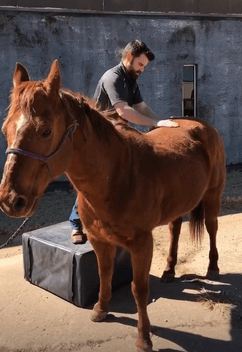 With hunter jumpers, we have these animals that they do not want to jump anymore. It's because of the excess pain it's causing in a shoulder joint. Or the pelvis is roached where we wouldn't have proper collection. There may be something off in their stride, they won't change leads, something of that nature.

There’s ton of different reasons that somebody might bring an animal to me, but a lot of times it's the animal doesn't do what they used to do.

I have a lot of people that are like, "My animal is a jerk. Can you fix this?" And seriously, most of the time with making one or two adjustments, the animal completely chills out and it's a completely different animal. Because if they have a headache, they're probably in pain. You start taking their pain away, they become happier.

We actually had this horse that was wild basically. He'd not been broke and he was chewing out of one side of his jaw. We had to lasso this guy into corner so I can make one adjustment. I made an adjustment to his jaw and he just stood there. He let us do everything we wanted to him. We could take the rope off. He didn't move because he was like, "Oh wow, this is going to fix me."

Think about it. If your jaw is sore, it can cause headaches. So I start with the jaw and work my way back. We check every joint in the body, just trying to make sure everything is moving like it's supposed to.

That’s so interesting! You mentioned indigestion before… how can chiropractic work help a horse who is prone to colic?

Whenever we're adjusting the horse, the body has a better ability to heal and function. Let's say we have a valve issue where the valves are not moving like they're supposed to. Maybe because there's a spasm in one side, which causes a rotation or a twisted gut type of situation.

So we're not doing anything specifically to the organs. What we're doing is secondarily affecting the organs by adjusting the spine. But we don't actually go in and do anything to the guts. It's just making things work better.

I’m glad you cleared that up. Speaking of… what are the biggest misconceptions you see about horse chiropractic? 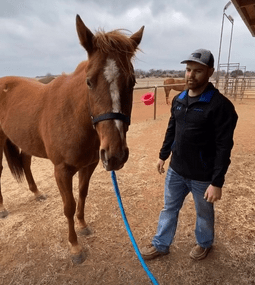 Our Tik Tok videos were the first time I've actually been able to see people's reactions. Most of the comments that I've seen that have been against me say there's no chance I can put enough force into the spine to move it. Well, I can have enough force to break a bone. I'm able to move a bone.

The misconception is 1) that we don't do anything. 2) Is that the animals don't need it, that they were surviving in the wild without it before.

Well yeah, they were surviving in the wild without it before. But if we look at we look at the skeletons of animals that are in the wild. Some of them do have misalignments. Also, the animals in the wild are not being ridden all the time. They're not being fed the grain diets that we put them on. They're eating off the land and they probably have less problems because their lifestyle is less stressful.

And we have a lot of people that see and they're like, "Well, we just did a nerve block and that should be good.” But they don't fix the root cause of the problem… they just fixed the symptoms. So that's also kind of an issue that we deal with on a regular basis.

Once you take your horse for a chiropractic adjustment, how often does the therapy need to be repeated?

It really depends on the animal. It depends on what they do for a living. If we have horse that is being ridden every single day or it's an athlete, we're going to be seeing that animal a lot more often than we would just a pasture pony. Because the animal is constantly putting itself under stress. So we need to make sure that that spine is constantly moving. Just like any other athlete.

That makes sense.  Here at Double D Trailers, we specifically design our trailers with supported floors, properly rated tires and axles that reduce stress and vibration for the horse. What are your thoughts on how excess vibration can do harm to a horse’s legs and spine? 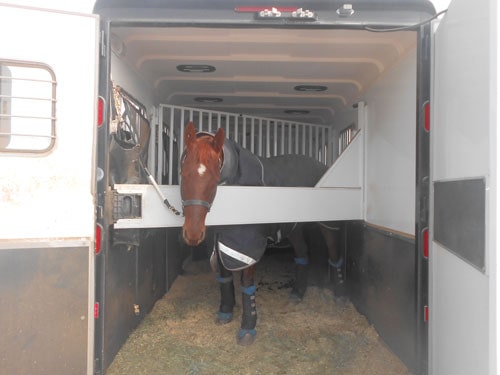 Oh yeah. There's a ton of vibration on the road, which is why I'm glad you definitely take that into consideration.

If you have a car and the shocks are out, you're going to damage everything in that car a lot faster than if you actually had shocks. It’s because there's no nothing taking on that vibration.

Then, let’s use another analogy. If we have a sliding screen doors and we use it over and over again, it will jump off track. If we continue to use it, it’s going to make it deteriorate faster. Instead of putting it back on track, we use this thing in a way it's not supposed to be used.

We do that to joints all the time. We can take a joint and continue to use it with it rotating in a way it's not supposed to be. It's going to cause faster damage. Well, then you put vibration through that you're increasing that damage twice as fast. You're changing how the bone is actually modeling. You're putting it under increased stress more than if it were just standing still on a platform or on the ground.

So instead of it just being weight compacted on it, it's weight being compacted on it with vibration. So you're taking something that has no cushion or the cushion is misplaced and you're causing it to vibrate together. So that is an issue by itself.

And we're not just looking at the legs. We're looking all the way through the spine. If the spine's moving and you put vibration through it, all you're doing is you're causing deterioration and damage faster.

So, do you have any specific recommendations to help horses who go on long or frequent trips in a horse trailer?

Get the animal adjusted before a trip and after a trip. What you're doing is you're minimizing the chance to have damage because you're keeping the body moving. And then whenever the body gets into the trailer, it can freely move as it needs to without it being locked down.

And, depending on how far the ride is, you might want to get your animals out and walk them around. Being able to walk around, being able to rest a little bit, I would highly recommend on long trailer rides.

This has been fantastic.  Before we wrap up, I’m curious … how did you get into animal chiropractic?

My degree is in biochemistry and molecular biology. I graduated from Oklahoma State University. I just didn't like working in a lab. I thought I did. I did it for about four years through school and I realized that test tubes don't like to hear your jokes.

I am a people person and I really enjoy science. So I went back into concrete construction, got hurt, found a chiropractor, and fell in love with the profession.

And then he mentioned something about, "Yeah, we had a lady bring a rooster in one time." And I was like, "A rooster?" I absolutely love animals. I've been around them most of my life. But I'm able to use animal chiropractic to help these animals.

But at the same time I'm able to use animal chiropractic to speak to people about their own health and chiropractic. I can talk to them about something and I make it relatable back to the human body. And then they're able to go, "Oh wow, I need this as well."

I think a lot of that really covers it. Bring your animal in before it has an issue. If you start to see the slightest little bit of an issue, then that's definitely something you want to get corrected now.