Recently, one of our articles about safe trailer hauling and tongue weight attracted the attention of the Horse Tip Daily Radio Show.  Host Coach Jenn invited Double D Trailers owner and chief designer Brad Heath onto the show to talk about this important issue.  They had a great discussion about how to determine your trailer’s tongue weight and what to do if you suspect your towing system needs adjustment.  The full transcript is included here.

Coach Jenn: Greetings horse people! Coach Jenn here and thanks for tuning in to Horse Tip Daily.  Today’s tip features Brad Heath from Double D horse trailers in Kinston, North Carolina.  Brad explains what ‘tongue weight’ is and why knowing it is important for hauling your horse safely.

And I am so pleased to welcome to Horse Tip Daily Brad Heath from Double D Trailers.  They are located in Kinston, North Carolina.  Welcome to the show Brad!

What is Tongue Weight? 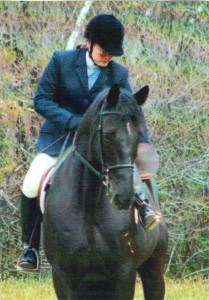 Coach Jenn:  This little conversation was prompted by a blog post that I found on Double D Trailers.  It’s all about tongue weight – what it is and why it’s important.  And how people can get pretty darned confused pretty darned easily … and potentially put themselves and their horses at great risk because they’ve got things over-weighted, under-weighted, etc, etc.  So let’s start out this conversation with: What do you mean by hitch weight?  What does that mean?

Coach Jenn:  So that’s how much weight is pushing down on the ball of your horse trailer hitch?

Brad:  See, you articulate so much better than I do!

Coach Jenn:  That’s what that is.  Alright now.  Are tongue weight and hitch weight the same thing? Let’s get that over with first.

Brad:  I would agree with that, yes.

What is Tongue Weight & How Do I Find It? 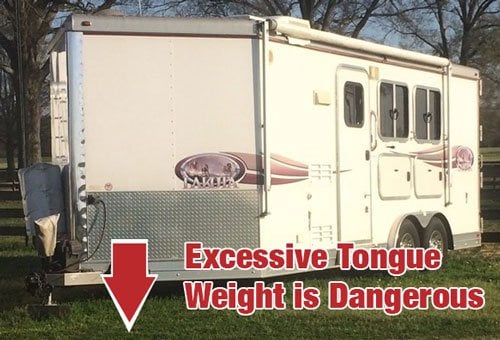 Coach Jenn: So they’re both the same thing.  Is there a standardized formula that your average consumer can use or is there a place on a horse trailer where it is always printed so that someone can find out what that is?

Brad:  I’ll address this second question first.  And the answer would be no.  There is not a place that I am aware of on any horse trailer manufactured in the United States that lists the tongue weight.  In fact, I don’t know of a manufacturer that even lists the gross trailer weight or what the trailer weighs itself.

Oftentimes, what you’ll find listed on the decal or manufacturer’s sticker on the trailer is the GVWR which is simply the capabilities or the capacity of the tires, wheels and axles.  So it’s really difficult for a consumer or a user or handler to figure out 1) what the thing weighs, and 2) what the tongue weight is.  The manufacturers don’t provide that information and between you and I… probably most don’t even know what the information is!  (laughing)

Coach Jenn:  (laughing) So that leaves a big question mark as far as our horse trailer is concerned.  Now if we were to move forward to our tow vehicle…Is there a way to know how much vertical weight that your hitch and truck is allowed to carry?  Is there some way to figure that part out?  Because it’s two – It’s how much one weighs but it’s also how much the other can carry.

Brad:  Yeah, so, let’s talk about the question 1 on the other one:  Is there a formula for calculating the tongue weight?  We do have a tongue weight calculator on our website that some engineers have developed.  It’s not exact science but it does seem to take in enough variables with the location of the axles.  You do need to know the overall weight of the trailer, so that’s one piece of the puzzle that’s required and the length.  You can plug in a few variables and the tongue weight calculator delivers a really, really close estimate.  It seems to be within about 5 or 10% accuracy.  So that’s one thing – a tool that we do offer. 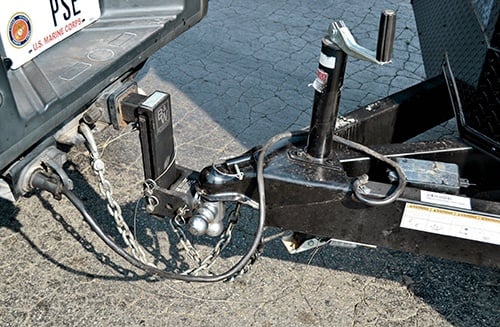 One of the ways or the easiest way that we have found to find that weight is we just look at the hitch.  The square receiver, that piece of tubing that’s bolted to the frame of the tow vehicle if you walk to the back of the truck or the SUV or whatever vehicle you’re towing with and look at the hitch itself - there is normally a sticker or a plate decal right on the hitch and what we have found, Jennifer, there are a few different numbers there.

One will say overall hitch rating – that means how much weight the thing can carry.  So if a trailer weighs 5,000 pounds and a hitch is capable of carrying 8,000 pounds - life is good.  The second number that we’ll see oftentimes on that hitch would be the tongue weight.  That’s normally broken down into two variables.  One would be without weight distribution and the second being with weight distribution.

Of course another factor that I don’t think we’ve even mentioned in our blog post that one of our users pointed out – They said, “Hey, don’t forget about the hitch ball itself.” Because the ball…

Coach Jenn:  I was just going to mention that!  You can put a hitch ball that has a lower rating than the actual receiver.  I found that out the hard way when I bought a new hitch.  Like oops, wrong ball!  (laughing)

What Should I Do If I Suspect a Problem with My Truck/Trailer Combo? 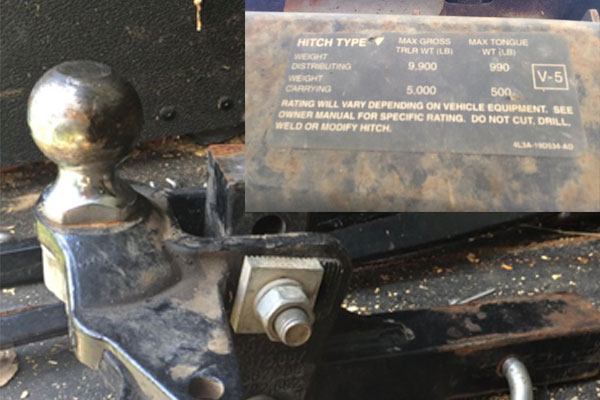 Coach Jenn:  Yeah, that’s exactly right!  Take me through kind of a step-by-step.  Your average user with a reasonably new horse trailer.  Let’s say that it’s a horse trailer that’s been manufactured in the past ten years.  And he’s got a tow vehicle that is less than five years old.  He wants to figure out these things.  What is a step-by-step process to figure out what his tongue weight is?  What’s the first step he’s going to do?

Brad:  So we’re under the assumption that you already own the trailer?  Is that correct?

Coach Jenn:  We’re stuck with it, but then we think, “Hmm.  Maybe I should look into this!”

Brad:  If you have a trailer, the easiest thing to do is to visit a local scale, a gas station that sells diesel fuel to 18-wheelers, those guys generally have some sort of commercial scale out back.  You can drive around.  They’ll charge five or ten bucks.

And then, another area that someone had pointed out on one of our blog posts – And I’ve never thought of this – They mentioned that scrap metal yards are often weighing loads.  So basically anywhere that would have the capabilities of weighing your trailer – a garbage dump – wherever.  If it has a commercial scale, that’s where you want to get to.

What are Weight Distribution Bars?

Coach Jenn:  One more question because this is another thing that people deal with when it comes to tongue weight… Explain to me what weight distribution bars are.

Brad:  Sure, so the weight distribution… When you roll the bumper pull trailer down onto the hitch of the truck or the tow vehicle if it’s an SUV, what happens, of course, is the back end of the vehicle goes down, the front tires of the vehicle begin to lift up.  As you’re traveling, that load can be unstable.  The front end of the vehicle is just not firmly planted on the highway.  If you have to make a sudden swerve or a stop the amount of control that you would have is not as great. 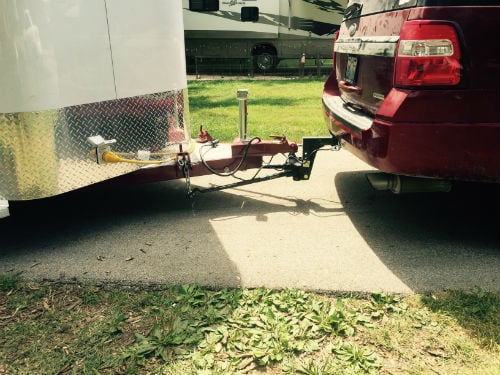 What weight distribution is, is exactly what it says. It distributes the weight from the back of the tow vehicle and helps move that weight farther forward so we want to raise the back end of the vehicle up, get the front end and those front tires down firmly on the pavement and really distribute the weight more evenly from front to rear on the tow vehicle versus just having everything sit down on the back.

When it comes to equalizer or anti-sway – I think there’s lots of different hitches and terms out there but from what we’ve gathered and at least what I have found, Jennifer, the anti-sway/equalizer systems really come into play, I don’t think so much for a horse trailer, but more for an RV/camper where you have an extremely tall, top-heavy load that’s very long, that’s very sensitive to wind if you’re traveling down the interstate in cross winds.  You know it will start trying to blow the load around.  So that’s where we have seen the anti-sway and those equalizers really come into play more as a benefit as opposed to on a horse trailer, which is generally a lower ride, lower center of gravity, and a much shorter box length.

Coach Jenn:  Very interesting.  One of the things I discovered again very recently is that I thought I needed a sway bar for my horse trailer because driving down the interstate it tended to sway a little bit when tracker trailers when past.  And when I quizzed person’s that understand all of the physics and geometry behinds these things what I in fact needed was a weight distribution system…

Coach Jenn:  …because the swaying was actually caused by the tow vehicle because the front end had gotten too light because the back end was too heavy because I had too much weight on my hitch.  When I lifted that up and helped redistribute that weight back towards those front tires where the manufacturer who built that truck intended for it to be, the sway went away!

It was not the horse trailer at all.  So, again, be very careful that you talk to somebody who understands specifically horse trailers, not just RVs.  Because the RV person said, “Oh, you need a sway bar!”  Well he’s used to dealing, like you said, with an RV, which is a very different piece of equipment than a horse trailer is.

Coach Jenn:  So that fascinating great stuff!  More information if anyone has more questions, I’m sure Brad would be just thrilled to talk to you.  Where can folks find you, Brad?

Coach Jenn:  Alright, so it’s Double D Trailers and they are located in Kinston, NC.  They’ve got lots of fascinating and informative blog posts.  You’ve got really interesting videos on there and, of course, really cool horse trailers.  Thank you so much Brad for stopping by the show and helping us out.