Home / Blog / Can Electric Trucks Pull Trailers With Horses?
Back to List of Topics

Horse owners are starting to whisper about whether to ask, “Can electric trucks pull trailers filled with their horses?”  Sure, it’s not common… yet.  But it’s only a matter of time until this new technology improves enough for everyone to jump on the bandwagon.

Many called 2022 the year of the Electric Vehicle.  It’s no surprise with new models like the Rivian R1T, Ford F150 Lightning, and even the Tesla Cybertruck showing up on the market.  (Yikes!  The Cybertruck sure is weird looking!)

We weren’t terribly surprised when a horse trailer customer asked about using an electric truck to pull her one horse bumper pull with living quarters.  Her trailer was still in production with our factory, but she has a Ford F150 in mind for towing. 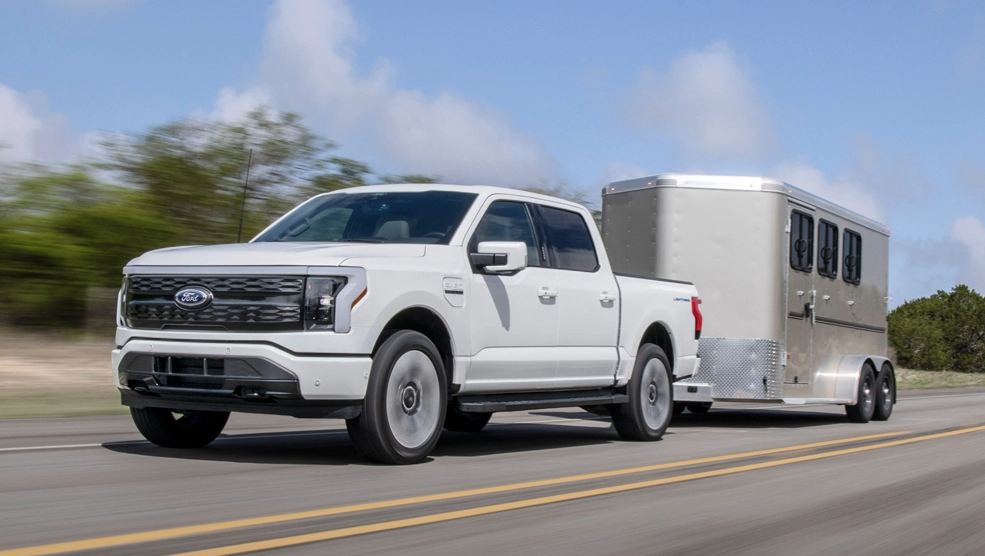 So, can electric trucks tow?  And, here’s a better question… are you ready to learn how FAR electric vehicles will be able to tow your trailer?  Read on to find out.

What Are Electric Trucks?

Simply put, electric trucks are trucks that run off of a charged battery rather than using an internal combustion engine (ICE).  Because they don’t produce the same level of vibration as ICE trucks, they tend to provide a smoother and more enjoyable ride.  They also have fewer moving parts, which can reduce the risk of mechanical failure.

The REAL reason why people are getting excited about them doesn’t just come down to less shaking on the gravel road.  The main advantages for electric trucks are:

If electric trucks don’t use gas, then how do they manage to tow heavy things like boats, campers, or horse trailers?

The magic comes down to modern battery technology.  There are various types of batteries used in electric trucks including lithium-ion batteries.  This tech is still being developed and improved, so who knows what’s in store for us all in the coming years.

Here’s another interesting note.  Many governments around the world are offering incentives to encourage the adoption of electric vehicles, including electric trucks.  These incentives can include tax breaks, access to priority lanes on the highway, and funding for charging infrastructure.

Drawbacks for Using an Electric Truck to Tow a Trailer

High torque and no gas consumption makes it seem like electric trucks are the perfect solution.  But there are some drawbacks to consider.

We already have several models of electric cars, SUVs, and trucks on the market.  And, chances are, those numbers will continue to increase as more brands put out new models. According to a report by the International Energy Agency, global electric vehicle sales increased by 63% in 2020, driven in part by the growing popularity of electric trucks.

Thankfully, the charging infrastructure for electric trucks is also expanding, with more charging stations being installed in a variety of locations.  Maybe you’ve noticed electric stations in the parking lots at the grocery store or in parking garages.  I’m guessing you haven’t noticed them as much in rural areas or alongside showgrounds you frequent.

Electric vehicle adoption varies widely from country to country. In some countries, electric vehicles make up a significant share of new vehicle sales, while in others they are much less common. Interesting… but now back to the main point.

Can an Electric Truck Tow a Horse Trailer?

A number of groups including The Fast Lane Truck, Motortrend, and Recurrent Auto have decided to test towing with an electric truck. They found that electric vehicles had a towing range that was about 50% of the non-towing range.  So, if you could normally go 300 miles without hauling a trailer, you could only expect to go 150 miles when all hitched up.

The woman who spoke with us had a Ford F150 Lightning electric truck with a payload capacity of 1,900 lbs.  This is well within the safe zone to tow most bumper pull trailers including the one horse living quarter trailer she had ordered.

Chevy’s electric truck only has a payload of 1,300 lbs and GMC boasts a 9,400 tow rating, but they keep their payload hidden (which suggests it’s not something they’re too proud of!)

Keep in mind that bumper pull horse trailers are often much smaller and lighter than their gooseneck or living quarters counterparts.  Those trailers can often exceed 10,000 lbs of weight even fully unloaded.  Add in your gear and 3 or 4 horses and your rig is suddenly much heavier and harder to tow.

Here are some values we found while searching for the best electric truck for towing: 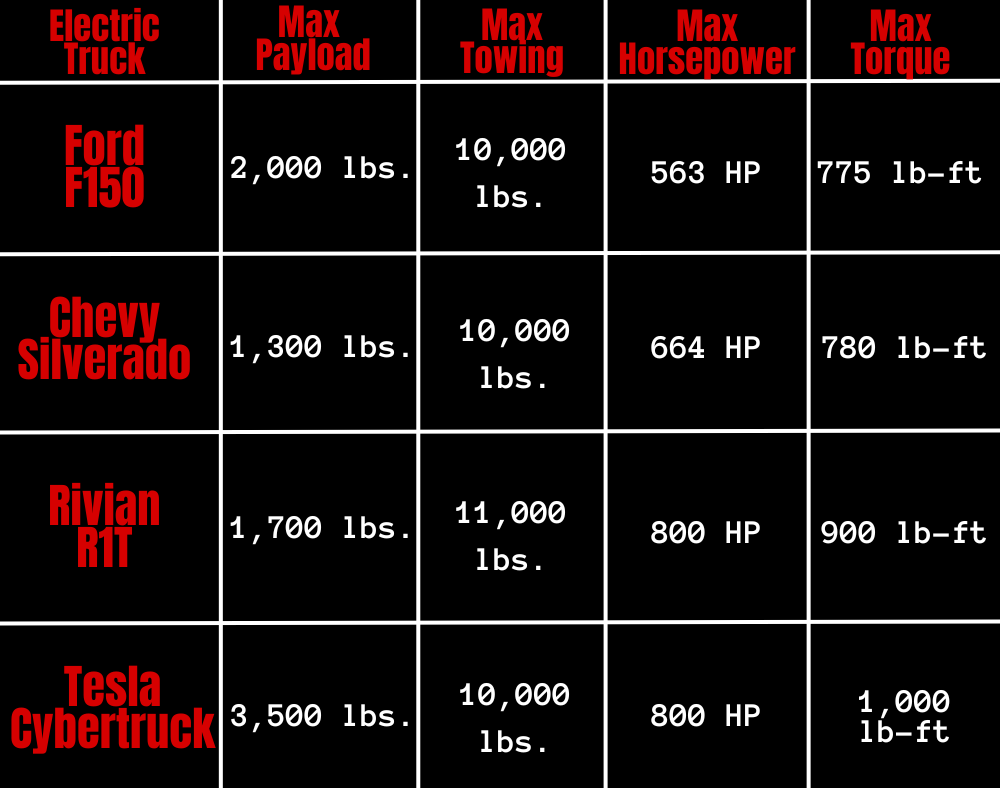 These numbers make it pretty clear that the electric truck towing capacity will work for some horse trailers, especially smaller models like bumper pulls.  However, larger living quarter trailers with a weight that exceeds 10,000 lbs will need a traditional ICE truck (at least for now.)  Perhaps, in the future, electric truck technology will improve enough to handle even the big trailers.

How to Recharge Your Electric Truck

Having a limited towing range isn’t too big of a deal if you have plenty of charging stations along your route.  Just keep in mind that you’ll have a trailer full of horses waiting in the back.  You won’t want to take too long with the recharge.

You’ll be able to find a charging station using tools available online. Some popular charging networks include ChargePoint, EVgo, and Electrify America.  Apps like Google Maps also can help you find a place to plug in.

Once you find a charging station, the amount of time you wait will depend on the speed of the charger.  The Ford F150 Lightning has a 98kWh pack battery and can charge from 15-80% in about 44 minutes (according to Ford.)  It can only accept 150 kW charge rates at DC Fast Charging (DCFC) stations. Other trucks, like the Rivian R1T can accept 220 kW of power at DCFC stations.

There are also Level 1 (120V) and Level 2 (240V) charging stations which will take several hours up to a full day to recharge an electric truck.  So, it really depends on your station.

The answer is: “sometimes yes… sometimes no.”  Towing with an electric truck and your trailer will work with some trailers and some trucks. It depends on the tow capacity of the truck model and the size of the trailer. Limited range and limited towing capacity means that electric trucks probably aren’t the best option to tow your horse trailer on long trips.

First of all, many trailers are just too large for an electric truck to tow.  Second, when you have horses in the back, you’re not going to want to stop every two hours to wait for your truck to recharge.

But, that’s okay.  For now, you can use regular gas-powered trucks.  Perhaps, in another few years, electric trucks will be ready for the challenge that is horse trailers!

Can a Tesla truck pull a horse trailer?

Can an electric pickup truck pull a trailer?

Electric trucks are very good at towing trailers up to a certain weight.  They provide very high torque and great stability on the road.  Some electric trucks wouldn’t be able to tow large horse trailers that exceed 10,000 lbs though.

How far can an electric truck pull a trailer?

Various groups have tested the towing range of electric trucks.  They found that the trucks were able to haul trailers about 50% of the distance they would travel without hauling a load.  For instance, the Hummer truck pulled a trailer 133 miles on a full charge.