Home / Blog / Just How Big are Horse Jockeys? (This Might Surprise You!)
Back to List of Topics

What is a Horse Jockey?

A horse jockey is a physical athlete that competitively races as a profession. Jockeys are considered to be athletes, because being able to maneuver and control a horse at such a high racing speed takes an incredible amount of precision and strength. Jockeys don’t just simply leisurely ride horses, rather; they are trained and equipped to push their horses to the max during races.

How Much Does a Horse Jockey Weigh (And Why Does it Matter?) 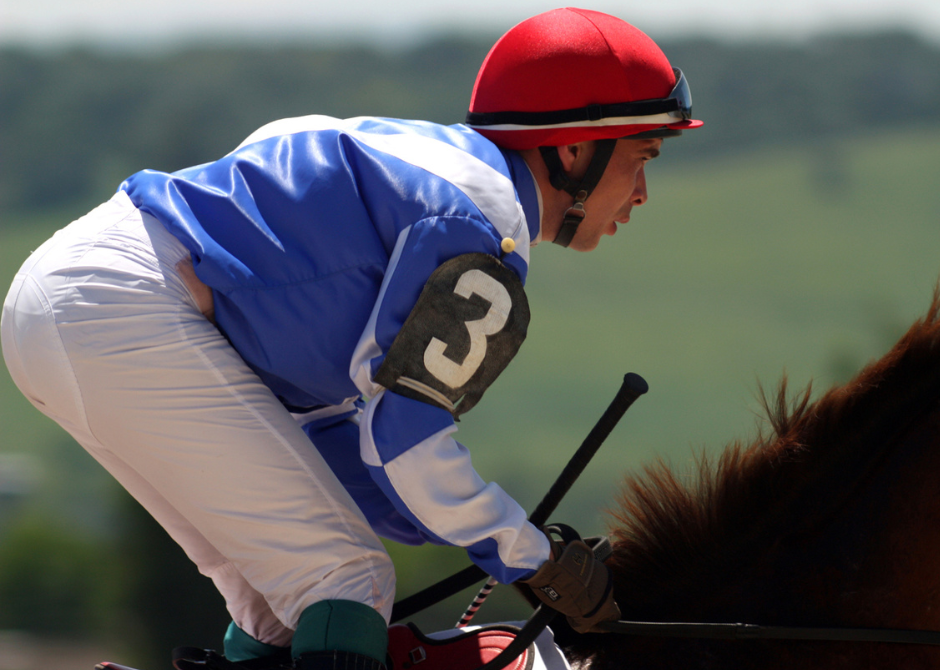 The horse jockey weight limit is extremely strict, but, for good reason. The weight requirements are set in place so that every horse competing in the race is fairly matched to race against one another. Of course, it also helps the horse to be able to race faster when they’re carrying lighter weight. While every race will have a different set of rules, the average horse jockey weight requirement falls between 112 – 126 lbs.

On average, male horse jockeys weigh 113 lbs. while female horse jockeys weigh in on average at 107 lbs. The actual average horse jockey weight is on the lower side although the race requirements range up to 126 lbs. because the weight has to include an average 6-7 lbs. of horse gear. For example, the weight maximum at the Kentucky Derby race is 126 lbs., but when you factor in 6-7 lbs. of tack, that means that the jockey can weigh a maximum of 118-119 lbs.

What is the Average Jockey Height?

While there is no height limit for jockeys, you can probably imagine that with such extreme weight restrictions – most jockeys are fairly small in stature as well. The average jockey height is 5’2”. It would likely be impossible for a much taller person to weigh in so low and still have ample stamina to race their horse well.

How Old are Horse Jockeys?

To apply for a jockey license, you have to be 16 years old. Fun fact: the oldest jockey rider to compete in the Kentucky Derby is Jon Court. He was 58 years old!

How Do Horse Jockeys Stay So Small?

As we mentioned, horse jockeys are athletes. It not only takes athleticism while competing to excel in a jockey career, but it also takes discipline and consistency outside of the race. Jockeys have to work full-time at keeping their weight down so that they are always race-ready.

Similarly to sports like wrestling and boxing, having a set weight cut off has resulted in many participants in the sport engaging in disordered eating behaviors. An anonymous study conducted in Australia found that 75% of jockeys skip meals on a routine basis, and 22% of jockeys admitted to using diuretics.

To learn more about the signs of an eating disorder visit eatingdisorderhope.com

Being a horse jockey is not for the faint of heart. If you don’t meet weight requirements - you don’t get to race, which means that neither you or the racehorse owner have the chance of making any money. There is a lot of pressure in the jockey world, because livelihoods are at stake.

For many years, there have been a few commonly practiced methods to help horse jockeys control their weight.

Jockeys have to stick to a regimented diet and exercise plan in order to stay in peak physical condition at all times. Victor Espinoza, Hall of Fame jockey says that he avoids alcohol and soda. He doesn't restrict anything when it comes to food, however, he eats only one meal a day and eats small portions. In addition, he has a scheduled and planned 5 day a week exercise routine.

For jockeys, taking long hot baths or spending time in the hot tub right before a race isn’t a form of self care. Rather, studies show that taking hot baths can burn up to 140 calories per hour. In addition, hot baths can reduce inflammation which can cause the body to hold on to excess fat.

Sweating it out in the sauna is not an uncommon method of shedding a couple stubborn pounds. Although the weight loss will be strictly water weight, every pound counts when it comes to racing. Many jockeys utilize saunas when they approach races.

Both laxatives and diuretics were both commonly utilized in the horse jockey world. However, in 1998, horse racings governing body the Jockey Club banned both of these substances.

You may be interested in checking out this video that shows a race day from the perspective of the horse jockey.

How Small is the Smallest Horse Jockey?

William (Bill) Shoemaker was an American Jockey who stood at 4’11” and weighed in at 91 lbs., making him 20+ lbs. below the average jockey weight. Bill raced in the Kentucky Derby 24 times and won 4.

How Big is the Biggest Horse Jockey?

By a long shot, the largest horse jockey on record to compete is Manute Bol. Manute, a former NBA player, stood at 7’7” tall. Bol weighed in right at 200 lbs. He raced for a charity event, so the weight requirement was not in place.

Why are Horse Jockeys Weighed Before and After a Race? 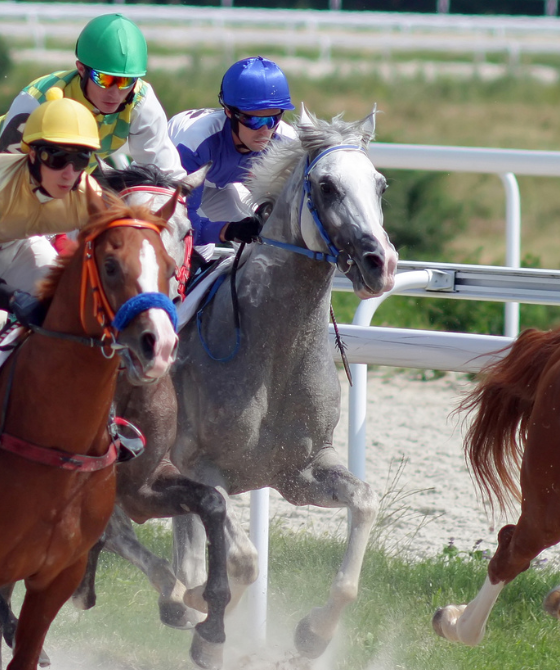 The practice of weighing in and weighing out is simply an extra method of fairness and accountability. Weighing out in the racing world actually refers to the initial weigh-in that occurs before the race. Weighing in refers to the post race weight check. Before participating on race day, jockeys have to weigh in with their horse with the clerk of scales. After the races, the weight is taken again to ensure that the horse carried their reported weight throughout the race.

How Much Money Do Horse Jockeys Make?

The salary of a horse jockey varies greatly, depending on the scale of the race and the percent of the take that they get from the racehorse owner. On average, jockeys get 5-10% of the owners. However, jockeys typically only get paid if they win a race. According to labor statistics, the median horse jockey salary in the United States is $48,880. The richest jockey in the world, Japan’s Yutaka Take, earned close to $800 million during his career with over 4,000 race wins.

7 Interesting Facts About Horse Jockeys That You May Not Know

Studies show that a jockey's posture improves horse race times by 5-7%. Jockeys use a crouched position and strategic leg movements to assist the horse in moving faster. Some jockeys use whips during their races, however there are clear rules that they must follow to abide by equine welfare regulations.

Horse jockeys are not allowed to place bets. Not only can jockeys not bet on a race that they are part of - but they can’t bet on any horse race at all. This is a controversial rule, however, the reasoning is that jockeys are too close to the sport and have inside competitor information.

#3: Being a Horse Jockey is Dangerous

Since 1950, more than 100 jockeys have died as a result of racing incidents. In addition, upwards of 40 have been permanently disabled due to spinal injuries that occured while racing. Studies have shown that the overall deaths in the sport have decreased since 1980. As with any sport, there are physical risks associated with participating.

Being a horse jockey is typically not a sport that allows you to keep participating as you age. As we get older, we lose muscle mass and agility, and gain weight easier. Due to the extreme physical nature of the sport, it’s rare that there is a successful horse jockey in the industry that’s over the age of 40.

#5: Female Jockeys are Few and Far Between

Horse racing is a male dominated industry, although women fought to compete. In 1968, women started to demand the right to apply for professional jockey licenses with the Civil Rights Act of 1964 backing their efforts. Even though the majority of equestrians today are women, less than 15% of present day licensed jockeys are female.

#6: There are Two Types of Jockeys

In most cases, horse jockeys only compete in one type of race: either flat or jump racing. There are different weight requirements for both of these races. Jump jockeys are generally taller and weigh more, while flat jockeys weigh less and are usually shorter.

Okay, kind of. Jockeys wear silks. Jockey silks are the bright colored jackets that are worn during races. The unique jackets are designed to allow spectators to easily differentiate between horses during the race.

Has a female jockey ever competed in the Kentucky Derby?

Diane Crump was the first woman to compete as a jockey in the Kentucky Derby race.

Has a female jockey ever won the Triple Crown?

In 1993, Julie Krone was the first woman to win a Triple Crown race.

How are jockeys chosen?

Horse jockeys hire agents that are responsible for booking races for them.

How fast do horse jockeys go?

At peak speeds horse jockeys travel with their racehorse upwards of 40 MPH.

Do jockeys own their horses?

No, jockeys are not allowed to own the horses that they compete with.

Can a horse win the race if the jockey falls off?

No, a horse cannot win a race with no jockey.