Home / Blog / Owning a Supersized Horse: The Story of Big Jake
Back to List of Topics

Owning a Supersized Horse: The Story of Big Jake

The world’s tallest living horse, affectionately known as “Big Jake” just recently passed away. Big Jake was born in March of 2001. He resided with his owners, the Gilbert family, on 85 acres of land at Smokey Hollow Farm in Poynette, Wisconsin. 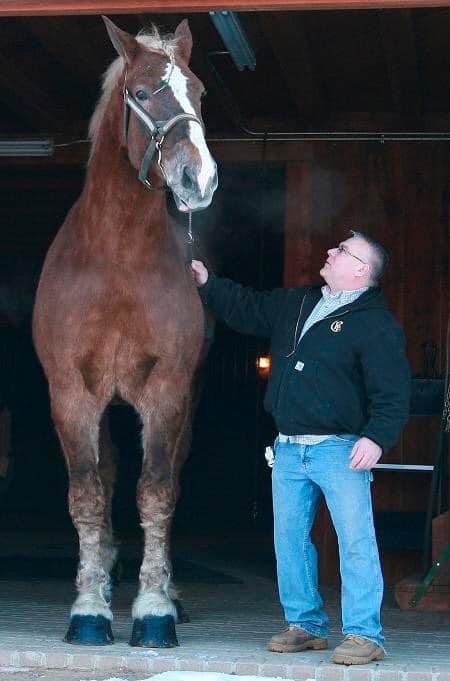 Smokey Hollow shared the news to their community on Facebook with a post stating, “Big Jake was much more than a world record holder. He was a central part of our family. We feel very privileged to have had him in our lives. He truly loved people and impacted many over the course of his lifetime.” Big Jake broke the world record for tallest horse in January of 2010, and he appeared in the 2011 edition of Guinness World Records.

We spoke to one of Big Jake’s owners, Valicia Gilbert. Valicia jokes, “We tell people he ate miracle grow”. It’s really a mystery as to why Big Jake grew as big as he did. According to Valicia, their family acquired Big Jake from a relative when he was 3 years old, because he was too big for their show hitch. It quickly became apparent that Big Jake was growing too big for them to handle.

Big Jake measured in at a whopping 20 hands 2.75 hands (82.75 inches). As another reference for his astronomical size; his owner Valicia says that Jake was, “about 6’10 to the top of his shoulder, and 2,500 lbs”. Big Jake quickly became quite the attraction at Smokey Hollow Farm.

As you may expect, owning a horse the size of Big Jake was no ordinary task. Starting with his living quarters, Big Jake’s stall was a 20 x 20 foot, compared to the average horse stall size of a 12 x 12 foot. Each day, Valicia tells us that Big Jake consumed 1 1/2 bales of hay and two full buckets of grain.

At home on the farm, Big Jake took up his fair share of room and board, and kept his owners busy with his eating demands. When it came to travel, that’s when the real difficulty arose. Big Jake’s owners state that, “He didn’t fit well in a standard horse trailer”. When Big Jake needed to be transported, they opted for using a semi-trailer to haul him from place to place.

According to the descriptions from his owners, it’s evident that despite his intimidating size, Big Jake was really a gentle giant. Smokey Hollow became a place for people to visit, and Big Jake was the main event – and he never seemed to mind it.

Big Jake was often surrounded by people, and the Gilbert family tells us, “He was very affectionate and absolutely loved people! He was gentle with the kids and loved to be petted and scratched. Not all horses like it as much and to allow it all day. All the fairs he went to without getting crabby was amazing.”

A sentiment that all horse owners understand, it’s clear that Big Jake was more than ‘just a horse’ to his owners, he had become a part of their family. The Gilberts have stated that they intend to remember and memorialize Big Jake by keeping his stall empty at the farm and placing a brick on the outside of it with Big Jake’s name and picture.