Home / Blog / Paint By Number: Equine Art Through The Ages
Back to List of Topics

Paint By Number: Equine Art Through The Ages 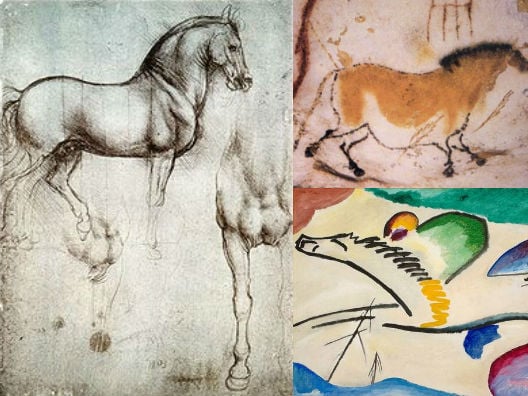 For thousands of years, horses have been by our side and helped shape our human civilization.  It is only fitting that they have been depicted in various pieces of art over time.  In this article, we are going to explore some of the most famous depictions of horses by artists across the globe.  We are also going to take a closer look at an artist from Ohio who is using her horse art to make a difference for abused and neglected animals.

Why Do We Use Horses in Artwork?

Of all animals, why are horses especially deserving subjects for art pieces?  Janet Rose, founder of the Equus International Film Festival, spoke most eloquently of her passion for horses.  Her words sum it up best:

“You have this very large, powerful, stunningly beautiful creature - one of the many of what I call magnificent examples of nature, and it is a creature that inspires people, that has fought in our wars, built our nations, plowed the earth, been a part of global societies, and cultures for thousands of years.  It’s an iconic animal…It inspires art and poetry and it does so much for us.”

Horses have been key players in military conquests, recreation, exploration, and culture throughout history.  The cinema often helps us see our equine history in vivid color.  Imagine the story of Ben-Hur without the edge-of-your-seat scenes from the chariot race! 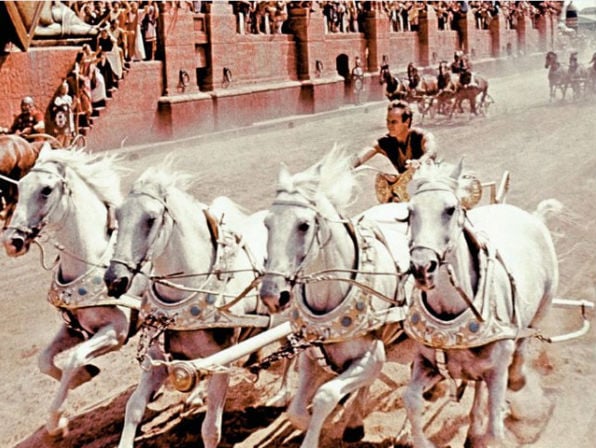 The story of Ben-Hur would not have been near as exciting without the chariot race. Horses have been present throughout man’s journey towards modern day civilization. (IMDB)

For now, put on your art beret, pull out your jazzy music, and let’s take a look at some of the most famous examples of equine art created over the ages.

Probably the earliest evidence of horse artwork can be seen in the Lascaux Caves in southern France.  These Paleolithic age cave paintings are estimated to be 17,300 years old.  They show that even in the stone ages, horses were an important part of human existence.

Fast forward a few thousand years to the time between 1000BC and 100 AD and you will see the creation of a gargantuan art piece that doubles as a landform.   The Uffington White Horse is a prehistoric hill figure that measures 374 feet long on the upper slopes of White Horse Hill in Uffington, England.  You won’t be able to appreciate this piece by simply walking up to it, but will instead need to find a pilot to fly you over the landscape.

The cave paintings in the Lascaux Caves of Southern France date back 17,300 years. The Uffington White Horse was created between 1000BC and 100AD and takes up an entire hillside.

Many different societies showed their appreciation for horses by including them in their artwork.  The Egyptians and Greek used horses to depict scenes of battle and exciting cultural events.  For instance, The Horses of Saint Mark (below) were bronze sculptures attributed to the 4th century BC Greek sculptor Lysippos and placed outside St. Mark’s Basilica in Venice, Italy after the fall of Constantinople in 1204.  Today, the four chariot horses are indoors for conservation purposes. 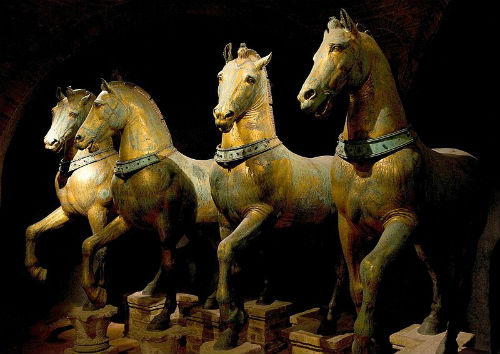 The Horses of Saint Mark were created in the 4th century BC. (Wikipedia Commons)

An example of Renaissance artwork can be seen with Leonardo DaVinci’s sketches of Leonardo’s Horse (also known as Gran Cavallo) commissioned in 1482.  Speaking of large art pieces, this work was actually intended to be the largest equestrian statue in the world but never made it past the preparatory stage.  We can still enjoy DaVinci’s genius work by viewing his sketches for the planned statue or by visiting one of the two modern replicas in Milan, Italy or Grand Rapids, Michigan.

You can view Leonardo DaVinci’s sketches of a planned sculpture or see a modern replica in Grand Rapids, Michigan.  (Wikipedia Commons)

By the time the Baroque era came around, painters like Peter Paul Reubens were creating portraits of important figures on horseback (below left) to show historical figures of power and influence.  In the mid 18th century, ‘romanticism’ took form with pieces like Theodore Gericault’s An Officer of the Imperial Horse Guards Charging (below right). 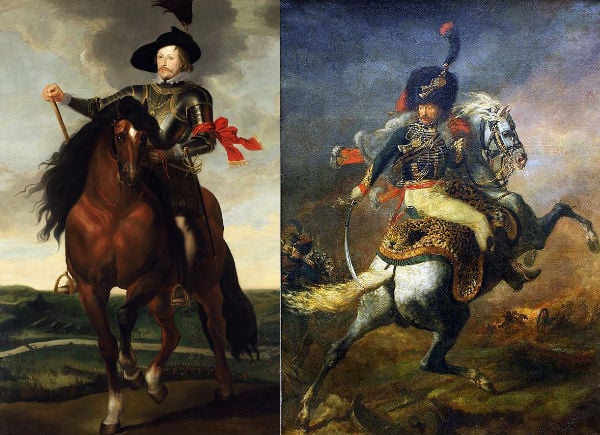 The accuracy of these horse pieces varied from artist to artist.  One painter, George Stubbs, was known as “the horse painter” in the mid 1700’s and went so far as to dissect equine carcasses in order to learn the full anatomy so he could more accurately depict his favorite subjects. 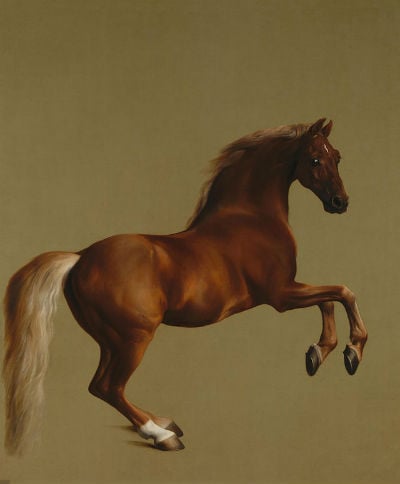 By the time the 19th and 20th century came around, horse artwork was shifting from military battles and portraits to scenes from horse races.  Examples of this can be seen in Edgar Degas’s At the Races (below left) painted in 1877 and the 1911 expressionistic piece from Kandinsky (below right).

Edgar Degas’s At the Races and this expressionistic piece from Kandinsky show the shift of paintings to include horse racing. (Wikipedia Commons)

Finally, equine art can be used to tell the rich story of Native Americans.  One of the most impressive examples of this is a sculpture of warrior Crazy Horse with his stallion currently being constructed in the Black Hills of South Dakota only miles from Mount Rushmore. The sculpture is literally being carved out of a mountain and the final dimensions will be a staggering 641 feet wide and 563 feet high. Once finished, this example of equine art will boast the title of world’s largest sculpture! 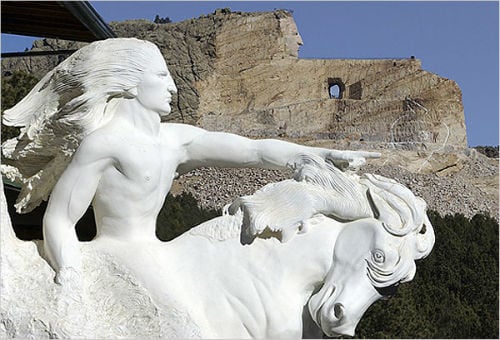 The world’s largest sculpture will be the monument to Crazy Horse in the Black Hills of South Dakota. (NY Times)

Horses have been an inspiration for many types of artists from the stone ages through to modern times.  Today, modern artists, both amateur and professional continue to use horses as their inspiration.

An Ohio Artist is Using Her Paintings to Make a Difference

Since equestrian art has been used throughout history to tell the story of how horses have aided mankind, it only seems fitting to round out this story with how the art can be used to help the horses themselves.

Elizabeth Ellis is a talented Ohio painter who studied at Kent State University.  She has undertaken a noble project to paint a rescue animal every week for the entire 2015 calendar year.  At the end of the year, an art gallery is going to display her work and auction off the pieces to raise money for the animals’ adoption.  Elizabeth explained, “My goal is to raise awareness for animal shelters and the work they do, while hopefully opening some eyes to animal cruelty and just how miserable people can be to animals who have no ability to flee their circumstances.”

Her project, called “The Year of 52 Rescues,” features all types of rescue animals including horses.  She cited her family’s long history of animal adoption to shape her feelings on the matter.  “I was raised in a rescue pet family,” she explained. Elizabeth grew up with her mom’s three rescue horses. 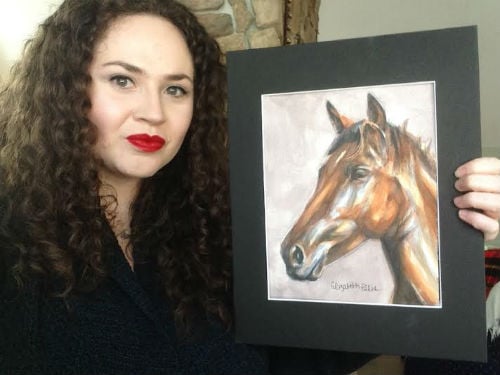 Elizabeth Ellis with her “Year of 52 Rescues” week #8 painting.

Elizabeth shared the story of one horse she painted named Apple.  “She was rescued when she was just a few months old, from a farm where the horses were starving to death.  Her mother was nursing Apple, and another foal, because the other foals’ mother had died before rescue showed up.  Apple is three years old now, and has some training but needs a home with someone who is willing to work with a young horse.”  Elizabeth maintains a website with weekly videos to share the stories of each of her painting subjects.

Apple is a rescued filly that is currently located at the Freedom Hill Horse Rescue in Dunkirk, Maryland.

Since the start of her project, Elizabeth has received quite a bit of attention.  Several bloggers have picked up her story and the Chronicle of the Horse is providing weekly postings on social media with a full-length article planned in December.

Horses certainly deserve their place in the art galleries of the world.  Be sure to check out some paintings, sculptures, and monuments of our equine friends next time you visit a museum or historical site. Or, if museums aren’t your thing, pick up your sketchpad and paints and get to work creating your own equine art!