Home / Blog / Riding Racehorses: What Does It Take to Be An Exercise Rider?
Back to List of Topics

Riding Racehorses: What Does It Take to Be An Exercise Rider? 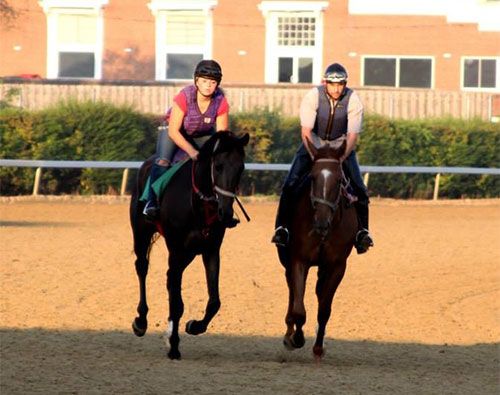 In just one week, American Pharoah has the chance to race into the record books as the next winner of the Triple Crown.  When he steps onto the racetrack in New York, he will be cheered on by thousands of fans in the stands, his trainer, owners, and dozens of stable workers.  There will be one person cheering who has spent more time in American Pharoah’s saddle than even his jockey…his exercise rider, Jorge Alvarez.  Alvarez is the one who was with the colt during months of morning workouts to turn him into the athlete he is today.

In this article, we’re going to take a look at the life of a racehorse exercise rider.  What is it like to work at a racing stable?  How do you land this exciting job?  We are going to hear directly from Carly Colt, an exercise rider and barn foreman from Colts Neck, NJ.  This is a career not for the faint of heart, and Carly is going to share what it takes to ride a three-year-old hot thoroughbred at breakneck speed!

A Career on the Track

With a name like hers, you could say that horses are in her blood.  Carly Colt’s parents both worked at the track and her father worked as an exercise rider/trainer.  She grew up on the family farm and rode almost every day with local eventing competitions, Pony Club shows, foxhunts, or rides on her farm.  Despite her daily dose of horses, Carly was still drawn to the stories her mother told her about horse racing. “I started reading about racing and bloodlines when I was only eight,” she explained.  “I always hoped to have a career on the track.”

After years of hoping, she was finally given the chance to ride racehorses at Overbrook Farm in Colts Neck, NJ with trainer David Nunn.  He took her under his wing and taught her the necessary skills she would need to transition from riding mature jumpers to young and hot thoroughbred racers.

There is no doubt that exercise riders need to have a strong seat and upper body.  This is a physically demanding job.  They also must be comfortable riding with very short stirrups, which allow the horse to move freely while galloping with the rider balanced over his withers.  The exercise riders take directions from the trainers who determine how far and how fast the horse is going to work that day. 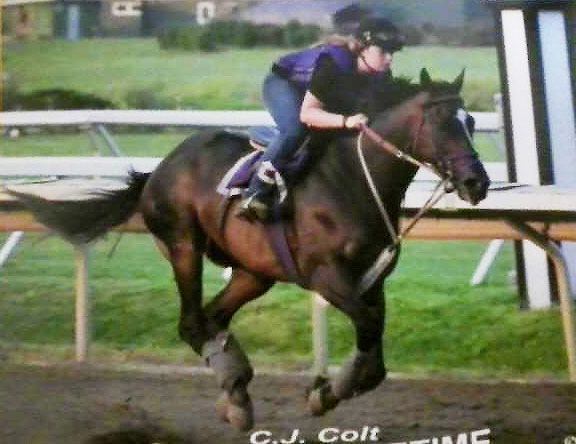 Over time, Carly developed her skills and earned a spot as the barn foreman and exercise rider for trainer Alan Goldberg and owner Richard Santulli.  This work has her split her time between New Jersey and Florida.  “We are based in Colts Neck half of the year, and then some horses are sent to Palm Meadows Training Center in Boynton Beach, FL to train through the winter and run at Gulfstream Park.”

This career demands a long workday starting very early in the morning.  A typical day for Carly begins at 5:00 am.  She heads to the barn and spends most of her time on duties related to her role as barn foreman.  She answers directly to the trainer and assistant trainers regarding management of the stables and its equine inhabitants.  Other staff in the barn hierarchy include the other exercise riders, grooms, and hot walkers.

One noticeable exclusion are the jockeys themselves.  Carly explained, “Jockeys come maybe once a week to breeze the horses, but typically we only see them at the races.”  All of the horses in her barn are over the age of two and fully broken to ride.  Mounts are assigned to riders based on chemistry and ability.

Since all of the horses train before 11:00 am, it is a busy morning for Carly.  Besides coordinating workouts and managing the barn tasks, Carly typically rides two horses each morning.  “I usually gallop somewhere amidst my other tasks, and then resume.”  She is given a midday break at 12:30 pm and then returns to the barn for afternoon work form 3:00-5:00 pm.

For her, this long day is well worth it.  “Nothing beats walking into the barn very morning to be greeted with all of these amazing athletes that I have the opportunity to work with on a daily basis,” she shared.

An Insider’s Take on the Triple Crown

Since Carly lives and breaths horse racing, it is only natural that she pays close attention to the Triple Crown each spring.  Her stable has had some excellent racers this year like Force The Pass who recently won the 2015 Cutler Bay Stake at Gulfstream Park, but does not have any horses competing in the 2015 Triple Crown. 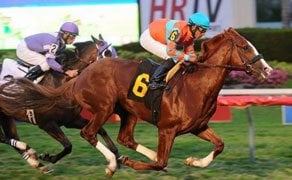 Force The Pass, trained by Alan Goldberg and owned by Richard Santulli, is shown here winning the 2015 Cutler Bay Stake at Gulfstream Park.

With the approach of the Belmont Stakes on June 6, 2015, we eagerly hope to see American Pharoah make history.  If he wins this race, he would be the first Triple Crown winner since Affirmed won in 1978.  In the 35 years since this last victory, fourteen horses have won the first two legs and failed in the Belmont. Three of these near misses were horses trained by American Pharoah’s Hall of Fame trainer, Bob Baffert.

In fact, there have been only eleven Triple Crown winners since Sir Barton first won in 1919.   This year’s 147th running of the Belmont Stakes is a Grade I, $1.5 million race that stretches over 1.5 miles at the Belmont Park Racetrack east of New York City.

The first two races of the 2015 Triple Crown were both run in sloppy conditions and American Pharoah thrived.  In fact, his exercise rider, Jorge Alvarez is hoping for a muddy track in next week’s race.  “I hope it rains in New York," he said.  “Miserable is in the eye of the beholder,” he stated.

For Carly Colt, she is excited to watch the upcoming race.  “Of course I’m rooting for a Triple Crown winner, but that is a quite a feat that will take an amazing horse to complete.”  Carly pointed out that each of the contenders has what it takes to win since they qualified for this race.  We’ll just need to watch and see if American Pharoah is able to pull it off.

The Great Rewards of Working With Racehorses

There is no doubt that galloping a young racehorse on a wide-open track is a huge thrill.  Carly loves everything about her job but also has future aspirations to move beyond exercise riding.  Her ultimate goal is to work as a racehorse trainer for a stable.  Her current roles as barn foreman and exercise rider are an excellent step towards this position.

For her, the rewards of her chosen career path are great.  “I love pretty much everything about my job, but I really love watching babies grow into big strong three year olds with established racing careers.”  Along with riding and horse training, Carly plans to continue her college education and advance herself as a creative writer. 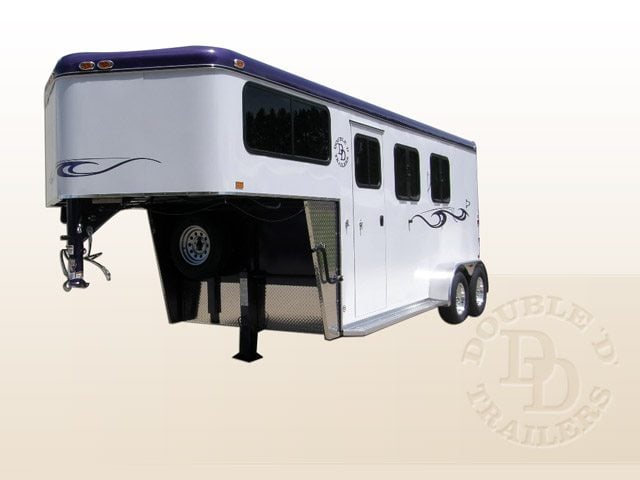 Be sure to check out some of the living quarters horse trailers available from Double D Trailers.

When you sit down next Saturday to watch the big race, remember to think about all of the people behind the scenes who work to prepare each horse for their moment in the spotlight.  It takes a stable full of dedicated workers to provide care and training for each horse.

Most of all, it takes one brave exercise rider who is willing to jump on the back of a young horse and fearlessly teach them how to gallop their heart out!  Carly summed it up well, “Exercise riding is something that I love and am far from mastering.  It is challenging, exhilarating, and certainly not for the faint of heart!”