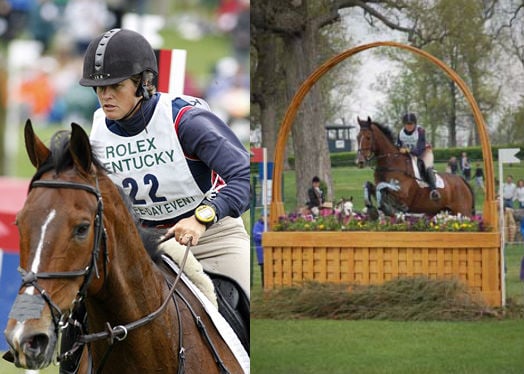 Missy Ransehousen is a truly remarkable equestrian.  She is a 1995 Pan American Games Silver Medalist, 2011 USEF Para Coach of the Year, and a 3rd place winner for the prestigious Rolex Three Day Event in 2008.  She also operates an extremely strong training program out of Blue Hill Farm in Unionville, Pa and has been an influential coach for the U.S. Paralympic Dressage Team.  We recently had the opportunity to chat on the phone with Missy about her accomplishments.   During the conversation, it became evident that Missy has a great love for her students, her horses, and an undeniable competitive spirit. Read on to learn more about her experiences competing, coaching, and find out what it’s like to compete at the biggest one of all…Rolex!

Growing Up With A Three-Time Olympian Named “Mom”

Missy is the daughter of a three-time Olympian, five-time National Dressage Champion, top-rated coach, U.S. and Pan American Games trial judge, USDF Hall of Fame member, and a recipient of the prestigious Lifetime Achievement Award.  Jessica Ransehousen’s contributions to the sport of dressage are truly impressive, but for Missy, she’s also just “Mom.” When asked if having such a mother influenced her drive to compete and coach, Missy answered, “Absolutely!  She’s a great mother to have.  She’s very good at giving me guidance and I really look up to what she’s accomplished.”  Today, Missy and Jessica work together to run the farm and training program at the 75-acre Blue Hill Farm in Unionville, PA.  They have owned the farm since 1982 and have helped many riders progress their skills into the elite levels.   Missy says of her mom, “She is a hard act to follow, but we run a business together and it works out well. She’s a great mom as well as a great instructor and rider…and she still rides!” 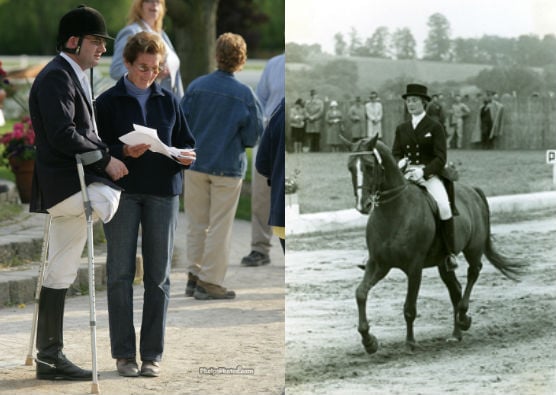 Over time, Missy developed her own style and established herself in the world of Three Day Eventing.  Early on, she earned the gold medal at the 1988 Young Rider Championships, receiving the Markham Trophy, USET's Highest Placed Young Rider at Fair Hill CCI***, in 1989, and was a member of the 1995 Three Day Event Team for the Pan American Games in Buenos Aries, Argentina, where the team won the Silver medal.  Since then, Missy has continued to build her career as both a competitor and a sought-after coach.

A unique opportunity presented itself to Missy back in 1999, when a local barn owner asked her to give a para equestrian clinic.  Although there were only a few riders, this experience presented some new challenges for Missy. “I spent the lesson really getting a lesson from her in return on how to teach them,” she chuckled.  This was Missy’s first exposure to riders with disabilities and she was forced to rethink teaching strategies to accommodate these riders.  “It worked out really well,” she said.  She went on to be one of the coaches for the 2000 Paralympic Games in Sydney, Australia and stayed involved with the program for the next thirteen years. “My biggest focus has been more with the elite riders, but I did do some developing clinics, and all of the international competitions.  I traveled with the riders and went as a Chef d'Equipe coach for whoever needed it.”  Her team members earned some high honors.  For instance, one of her students, Rebecca Hart, was the National Para Champion in Dressage in 2009, Champion in 2010, Reserve Champion in 2012, and a member of the 2012 Olympic Team that traveled to London.  Missy’s coaching work did not go unnoticed, and she was named the 2011 United States Equestrian Team Para Coach of the Year. 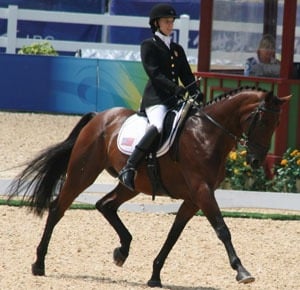 Riding with a disability presents its own set of challenges.  Depending on the rider, they may need help mounting or dismounting from the horse.  Missy explained, “They have adapted equipment to be able to ride as efficiently as they can.”  Still, para equestrians can do wonderful things on horseback.  Missy explained how they are just as good as able-bodied riders and judged at the same high standards in the dressage ring, “They are extremely driven riders.  They are very goal oriented.  They are very competitive.  It’s nice because at no point do they feel sorry for themselves.  You teach them to be just as good as an able bodied rider.  Their dressage tests are just as precise.  A 20 meter circle is a 20 meter circle,” she said.   Things like rhythm and accuracy are just as important as with able-bodied riders. Be sure to read the profiles of some of Missy’s students on her webpage to see some inspirational stories of talented dressage riders. 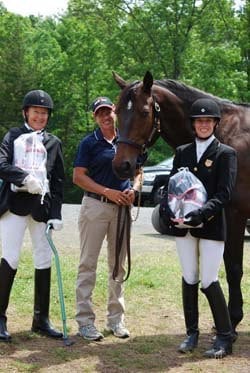 Working Today as a Coach and Competitor

Missy recently stepped down from her role as Para Equestrian coach for the US Para Olympic team, but that does not mean she’s slowed down in the slightest. Missy and her students spend almost every weekend at dressage shows, events, or unrecognized jumper shows.  “We do stay quite busy,” she laughed.  Sometimes she goes just to compete by herself, but the majority of the time, she is also there with students.  For bigger local competitions where Missy is also competing, she helps students around her own ride times, or her mom may help riders warm up riders for the dressage event.  “It’s all geared towards every rider that comes to train with us, to do the best they can.  You want them to be successful. I try to be there as much as I can.”

One of the reasons that Missy is such an outstanding coach is her love for the sport and her students.  “I love to see other riders be successful!  I love to see the work that you put into helping them train and get to their goal. Then, doing well at that competition is the most rewarding,” she said.  She admitted that it can be tough at times to be a spectator when she really wants to be out there riding herself.  “Being a spectator is the hardest part.  If I’m at the competition helping my students and I’m not able to ride, sometimes being that spectator is a little difficult at times too.  But, I’ve learned to balance it all.”

Her own competition schedule is lighter than normal this year.  She explained, “I’ve had some fabulous horses to ride, but I just have a 3 year old to ride at the moment, so I’m not really doing much myself. That’s hard.  Once you’re a competitor, you always want to be a competitor. I’ve had a quiet year this year, but it’s all part of the business that I have.”

“Rolex – The BEST Event Ever!”

For Missy, the most exciting event of the season is most certainly the Rolex Three Day Event held at the Kentucky Horse Park each spring.  “I finished third in 2008 and that was probably one of my happiest moments,” she shared.  “It was a challenging course on a horse that I have had since he was three.”  For her, the entire event is exciting and impressive.  “It’s phenomenal.  It’s amazing the athletes that those horses are!  It’s pretty cool.  I am lucky to have done it four times in my life.” When she rode to the bronze in 2008, her companion was a 1997 Dutch Warmblood Cross named Critical Decision or BG for short.  “I bought him with the name of BG which was short for Big Guy and it stuck!” she laughed. 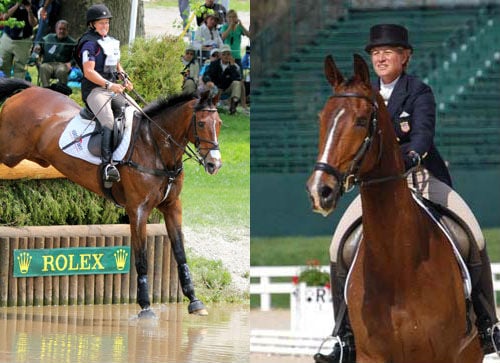 So you might ask, ‘What is it really like to compete at an event like Rolex?’  Missy explained that for this and any other event, “Coffee is first!  No matter what hour I wake up, coffee is very important!”  She doesn’t eat anything special in the mornings to prepare for the big day.  “I’m not a huge eater,” she said.  After breakfast, it is time to prepare the horses for their journey to the event.  For larger events, she receives help from stable hands who braid her horse for her, but will do the braiding herself for small events.

To travel to the venue, Missy uses a unique trailer designed for 4 to 5 horses positioned head-to-head.  Her trailer is similar to a horse van because it is higher off the ground and has pullout ramps so you can unload the horses from either the left or the right.   She explained, “It has a separate compartment in the back, which is another 6 ft, and that is usually what I use for my tack room.”  The gooseneck area of the thirty-foot trailer is used entirely for storage.  This is different from usual horse trailers with living quarters in the gooseneck portion of the vehicle. 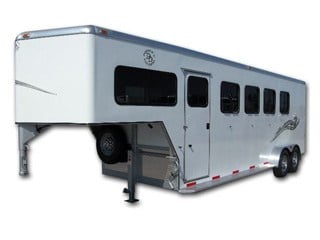 This trailer is perfect for her needs. “I like it because it has good ventilation and the horses travel quite well in it.  It’s quite old now though.  It’s almost 20 years old. ” Another positive feature of her is trailer is that “if it’s raining we can tack the horses up in the trailer.”  She chuckled again at the end, “It’s sturdy!  I’ll give it that much.  It’s a sturdy trailer!”

Once at the event, “Giving the horse a proper warm up, whether it’s 20 min or 40 minutes, that’s important.”  She will take some time to walk the cross-country course or show jumping course depending on what stages are to be competed that day. After the cross-country event, she will usually eat a decent meal.  After a long day of showing, Missy described her routine, “At the end of the day, icing the horses, wrapping up their legs, feeding them dinner, turning them out, and then I come into the house and I have my own dinner.”   Again, she laughed, “I’m always going.  I’m not a very stationary person.  I always occupy my time doing something.”

For many of us, we will only ever experience the thrill of Rolex and Olympic competition from the comfort of our couch, so we are glad to hear about Missy’s experiences.  To learn more about Blue Hill Farms, Missy, and Jessica Ransehousen visit their website at www.bluehillfarmpa.com.  And next time you tune in to watch a Three Day Event on TV, be sure to keep an eye out for Missy and her next competition mount!

Do you have any stories to share of para equestrians or para athletes?

What is your favorite part of watching the Rolex Three Day Event each year?