Home / Blog / Sit In the Driver's Seat with Harness Racing!
Back to List of Topics

Sit In the Driver's Seat with Harness Racing! 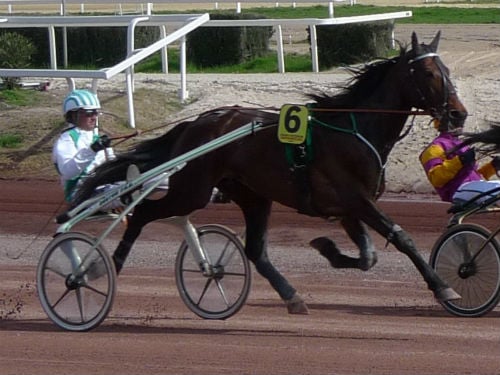 For many horse enthusiasts, springtime signals the start of horse racing season.  Spectators and gamblers flock to the Churchill Downs in Louisville, KY to watch the first race of the exciting Triple Crown of thoroughbred racing.  This year, why not check out a smaller, equally passionate set of competitors... standardbred harness racers!  Standardbred harness racing may not be as familiar to many, but the sport is packed with just as many thrills and triumphs.  We had the chance to speak with breeder, trainer, and race driver, Donna Herriott to learn about her lifetime working with these horses.  We’ll show you why harness racing can be just as exciting and even more accessible to the racing enthusiast.  Plus, you’ll get to learn a bit about the quality traits of the standardbred breed.

Donna Herriott hails from Delaware, Ohio, where she grew up showing horses in 4-H.  This is the home of the Little Brown Jug, a famous pacing race for harness horses.  She was introduced to the world of harness racing through her father-in-law, who owned a racing farm.  Before long, a tough 2-year-old colt frustrated the regular trainer and Donna volunteered to take over his training.  He thrived under Donna’s hand and ended up being a very nice racer.  More importantly… Donna had taken her first step as a trainer.

Over time, Donna grew in her training skills and ended up working for several trainers before she started her own stable. She certainly didn’t coast through her work.  She chuckled, “I always got people’s bad horses, the ones they didn’t’ want to mess with.  I always got the ones where I was their last chance.”  One of these “problem child” horses was a mare named Shady Daisy, who Donna started in a harness for the first time.  This mare went on to become the first “millionaire” pacing mare and even had a race named after her. “She was a heck of a mare!” Donna exclaimed. 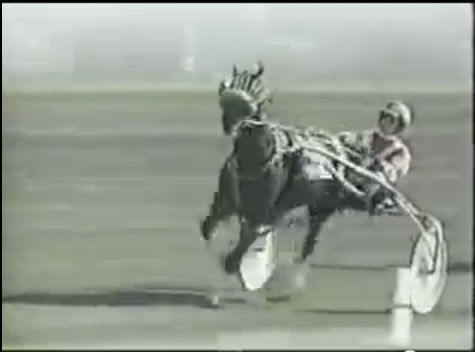 Eventually, Donna was given the opportunity to breed her own harness racing horse named I Feel Lucky Today. “She was my first ever foal that I raised.  I had yearlings given to me that I trained, but Lucky was my first foal that I raised.”  As opposed to hand selecting a horse from an auction or sale, she emphasized the difference of breeding your own horse.  “When you raise your baby, you’re stuck with what you get… And Lucky was crazy.”  For instance, Donna explained that she would accept the bridle only if she had her nose on the ground.  “If I didn’t own her, I would have told the owner that she had enough problems that she wasn’t meant for racing, but since she was mine, I just worked with her…She was just a horrible-horrible horse to jog on the track…just horrible!”

Fortunately, Lucky’s quirks didn’t cause an issue on race day.  Donna shared that on race day, “ You couldn’t ask for a better horse.  She knew what her job was.  That was her calling.  She loved it.” 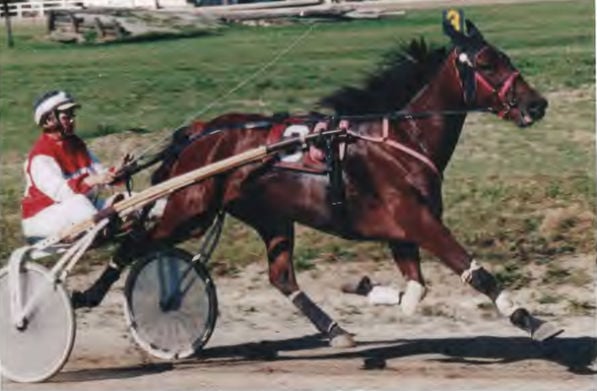 Donna and her horse Lucky compete in a race.

Going Fast When A Gallop is Forbidden

As the name implies, harness racing horses are harnessed into a cart or ‘sulky’ where the driver sits behind the horses.  These horses will either race in the trot or pace gait, with different races for each.  For those who are unfamiliar, the pace is similar to a trot in that it’s a 2 beat gait but the right foreleg and hind leg strike the ground simultaneously, followed by the left foreleg and hind leg.  Horses who compete in trotting races tend to present faster times and earn more money overall.

Harness horses are not allowed to ‘break’ or start galloping during a race.  If they break into the canter, then need to be taken to the outside of the track until then resume the trot and pace where they can then rejoin the race.  So how do you train a horse to never break into the forbidden gallop?  She explained, “They are bred for either pacing or trotting, although pacers trot of course.  Trotters, you can get them to pace, but trotters make more money, so that’s what you want them to do.”  She would jog with her horses starting at half a mile and building them up until they are trotting 5 miles at a relaxed trot.  She would increase the distance until they are going 5 miles at a relaxed trot and then start ‘brushing’ the horse, or asking for a quick burst of speed. 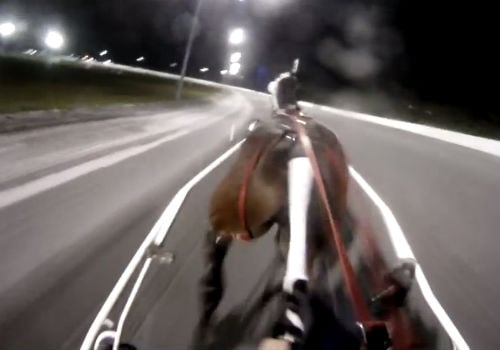 Watch this video to see what it’s like to be in the driver’s seat!

Donna continued, “Once the horse has about 500 miles in them, you start turning them so they are going the direction of the race.” Most of the training is done in the clockwise direction with actual races done in the counter clockwise direction.  “They know that when they’re going the other way, it’s race time.”  First Donna would try to go a mile in 3 minutes.  Then, she might bring it down 5 seconds without her horses trying to break into the canter.  She explained that you need to build up their speed and confidence while always working them with a training buddy.  Another thing that helps them trot and not gallop is having them shod correctly and training them to hold their head correctly for balance.  Ultimately, a good trotting horse can do a mile under 2:00 minutes or even at 1:55.

Once their training is complete, harness racing horses typically race once a week.  Lucky’s race career as a trotter was mainly during the winter months.  “Lucky had a problem called ‘tying up’, so she liked racing in the winter better.”  Horses may race like this for 6-7 weeks and then need a break.  “Mainly, Lucky raced in ‘over-nighters’.  This is where you go to the track at night and race in a condition race.”  This allowed Donna and Lucky to face specific groups of horses like non-winners from certain race types. Lucky competed at several raceways including the Lebanon Raceway, but also at smaller fair races.  Donna said, “I liked to drive her so I raced her in fairs.”  Of Lucky’s 40 starts, she won 18 races.

Donna emphasized that not just any horse can be a racing horse.  “You can’t make them go fast.  They have to want to do it.”  For Donna and Lucky, their proudest moment in racing came in January of 1998 when they won the open trot race. “She won the Open Trot 72 days after she had colic surgery.  So for her to survive the surgery and then come back and race 72 days later…I was ecstatic with that.  That’s nothing to anyone else, but it meant the world to me because she was on her death bed.”  Fortunately, Lucky rebounded quickly from her illness, won this race, and then continued on to live a happy life.

After Lucky’s racing career was over, she was put out to pasture, yet Donna sensed that she wasn’t happy with her sedentary lifestyle.  “I had no intentions of riding her but she would stood at the gate and watch the house.  She wouldn’t go eat.  She wouldn’t go out with the other horses…so we put a saddle on her!”  Now, 17 years later. Lucky has turned into a fantastic under saddle horse for Donna and her granddaughter, Lilly.  “She needed something to do.  Being a pasture ornament wasn’t doing it for her.” 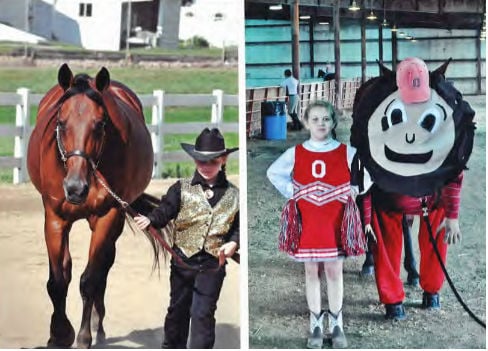 Today, Lucky is 23 years old, and like many standardbreds is extremely gentle with children and has great ground manners.  “Most standardbreds are that way.” Lucky has been a great horse for Donna’s granddaughter.  They recently won the Reserve High Point Youth Rider award in their local show circuit.  It was clear that Donna truly loves the breed.  “What I love about the standardbred horse is their willingness to work.  They have a great work ethic.  They want to please you.”   She concluded, “Standardbreds are a jack of all trades and a master of one.”

Why Should You Check Out Harness Racing?

Donna absolutely loves harness racing as a sport and enjoys the accessibility of a sport.  Not just anyone can take their thoroughbred to the races, but with harness racing, the average person can drive their horse in races.  Imagine getting the chance to experience the thrill of racing with your horse!  “You can’t ride your thoroughbred racehorse, but you can sit behind your standardbred and drive it!” explained Donna.  You can apply for various types of driving licenses based on the level of race you’d like to enter.  The Triple Crown of harness racing for trotters includes the famous Hamiltonian race at Meadowlands Racetrack in New Jersey, the Yonker’s Trot at the Yonker’s Raceway in New York, and the Kentucky Futurity in The Red Mile Raceway in Kentucky.

“Harness racing is exciting, the close contact of the horses when you’re in the race going up to the gate is a thrill,” Donna explained.  “The horses try so hard.  They know what they’re doing.  They want to beat the other horses.”  When asked what she loves, Donna replied, “The beauty of it… the bravery of the horses… the urge to run… how they keep their gait is admirable to me.” Another benefit of harness racing is the cost.  It is much less expensive than thoroughbred racing.  Best of all, YOU can drive in an amateur race. “I got my license went I was 38 years old!”  Donna continued, “If you want to experience what it’s like to be in a race, you can do that with your standardbred!” 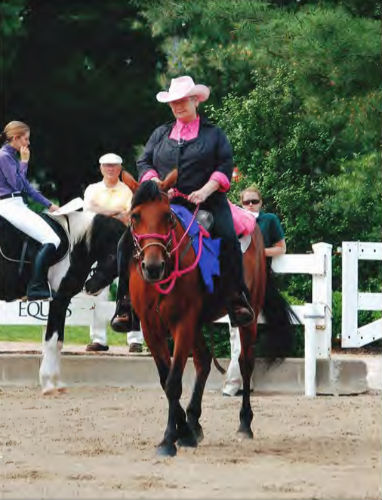 17 years after her racing career ended, Lucky has continued to be a faithful companion for Donna.

Horse Trailers for Sale That Can Fit Your Cart or Carriage

Donna used a 2H trailer to transport her horses and equipment.  “It was pretty much a rust bucket,” she chuckled.  For standardbreds, it is important that the trailer has enough height.  “They need to be a little taller,” Donna explained.  “They like them a little roomier than most trailers.”

If you have a horse with a cart, Double D Trailers can design unique options to meet your needs.  Brad Heath explained that he has worked with several clients who needed to fit their cart or larger carriage directly in the trailer.  This blue print shows just one example of the many horse trailers for sale from Double D Trailers. 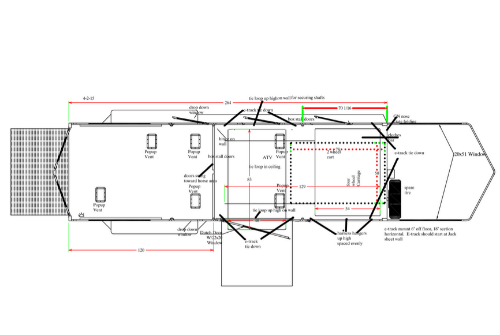 This is a trailer design from Double D Trailers that leaves space in the front for a cart.

The standardbred is a breed that shows true heart on the raceway and is a loving companion for their owners.  Check out the US Trotting Association to learn more about he sport, regulations, and history.  Next time you’re looking for a unique and exciting experience, check out your local harness racing track.  You never know, maybe this will ignite your racing spirit and lead to YOU behind the reins of a standardbred harness racer!