Home / Blog / Straight Load or Slant Load Horse Trailer: Which is Better?
Back to List of Topics

Straight Load or Slant Load Horse Trailer: Which is Better?

It is a great debate that has been discussed for years.  Is a slant load or a straight load horse trailer better to buy?  If you’re talking about conventional designs from another brand, then we’ll admit that there are pros and cons to both types of trailers.

However, if you are considering a Double D Trailer, then it is pretty clear that our slant load horse trailers win the day.  We’ve worked hard to overcome many of the challenges on conventional slant load trailers to create a unique SafeTack design that provides the best safety features, road handling, comfort, and convenience of any trailer type. 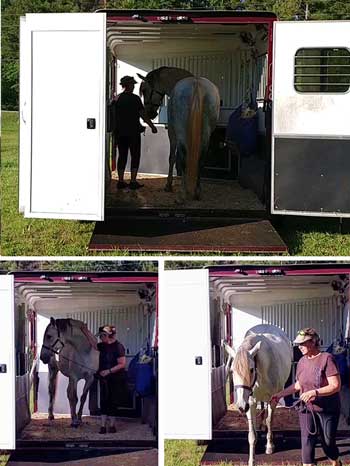 Slant load horse trailers from Double D Trailers are MUCH safer for loading and unloading your horse compared to a conventional straight load design.  Double D Trailers owner Brad Heath shared, “I have never had a client with a SafeTack slant that complained with loading issues, unloading, or hauling problems.”

In an average straight load trailer, horses are walked into a stall position with the partition swung over to the side.  Then, the handler needs to walk beside the horse to straighten the partition and raise a butt bar.  Your second horse needs to walk down a narrow “hallway” to load into his stall.  Once again, you need to walk behind the horse to raise the butt bar before he decides to back off again.  If you own an unruly horse, then you know that this is not always as easy as it sounds.

“It's a lot of dangerous motion for the handler while standing behind an animal that weighs ten times more and probably isn't happy about being forced into a trailer to begin with,” Brad explained.  “In my opinion, it's a perfect opportunity to get kicked, and unfortunately….It happens!”

In comparison, the loading on a SafeTack slant load trailer is much safer for both the horse and handler.  Our design has an enclosed tack storage area on the rear corner of the trailer that swings out like a second door.  This leaves a completely wide open entry way for ALL of the horses to load.  There is no narrow “hallway” effect that limits your escape options.

As a handler, you can latch/unlatch partitions without being in the kick "danger" zone.  If you have an unruly horse, you can easily walk up to their head while staying on the safe side of the partition.  After they’ve been calmed, you can release the partition and walk them straight off the back of the trailer.  Slant load trailers are generally wider than straight loads so your horse has more room inside to actually turn around and walk out.

What Happens if You Need to Unload Quickly for an Emergency? 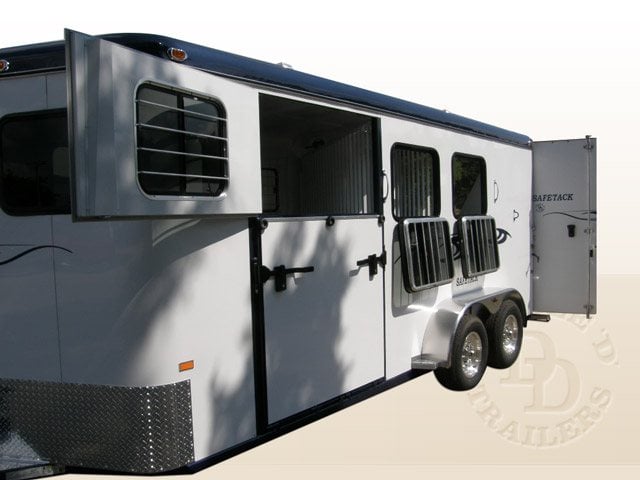 A reader recently sent in this email to Brad...

"I currently have a featherlite slant that is too short for my horse, but can easily load and unload. When the fires broke out here, I had to panic buy a Sundowner straight load warmblood so I could evacuate my horse, and getting the Butt bar closed and the ramp up alone sucked. It does not have the doors that close behind the horse, so with a young horse, trying to do the Butt bar and then close the ramp directly against him was horrible.

He kept kicking and as the ramp came up, it spooked him and all I could do is hold it up and scream for help with securing it. Doors would have helped. At least I could have closed the door and then settle him before doing butt strap and then put up ramp. Total nightmare in a stressful fire situation, so uncomplicated ease of loading and unloading is critical to me now."

Our SafeTack slant load trailers can easily be built with a horse ramp on the front side of the trailer so you can access all of the horses individually.  Not only does this provide an additional escape door during an accident, but it also provides a convenient “walk-thru” option for regular loading and unloading.

Which Type of Trailer is Easier to Tow?

Our SafeTack slant load trailers offer much easier and safer towing compared to straight load trailers.  They provide a shorter wheel base and better use of floor space resulting in an overall shorter trailer.  Also, the tongue weight on these trailers is often lighter allowing for more maneuverability during towing.

A slant load trailer with a shorter wheel base will allow for this higher maneuverability.  Brad explained, “The term wheel base refers to the distance of the front tire on your horse trailer, to the back tires on the tow vehicle.  The closer the distance, the more closely your trailer follows in the tow vehicle tire tracks.  The greater the distance (or longer wheelbase) means the trailer follows a pattern farther outside your tow vehicle tire tracks when turning, thus requiring you to "swing out" during your turns.”

The longer wheel base on straight load trailers won’t be nearly as noticeable with a smaller two horse trailer. However, on larger goosenecks, manufacturers place axles at the back end of a trailer resulting in ridiculously long wheel bases.   This is why you never see us build a two horse straight load trailers with a gooseneck, mid tack, and living quarters (see drawing to the right). Brad shared, “Clients reach out to us on a daily basis requesting those until we point out the dynamics of the design and how it's a horrible utilization of space.”

Next, the tongue weight is often lower on our SafeTack slant load designs when compared to straight loads.  To understand why, let’s look at a specific design example from Brad:

Here at Double D Trailers, there isn’t much different in the cost of a straight load and a slant load horse trailer when comparing similar quality models.  This means a 15’ long two horse box trailer, with the same width, height, windows, and doors will cost about the same on a slant load or straight load design.  Whether the partition is angled or built straight isn’t going to make much difference in cost. 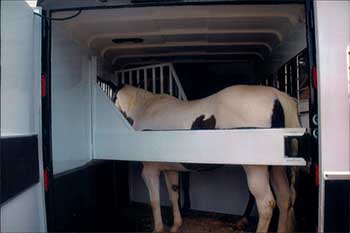 He continued, “As a designer, it's a daily battle with clients with larger breed horse such as drafts or Warmbloods.  They have been told by dealers their horses will not fit in slants, and it's actually a true statement.  Their horse will definitely NOT fit in a slant that hasn't been built specifically for larger breed horses.”

Just like humans, horses vary greatly in size.  They can range in height from 14 to 17.2 hands with weights ranging from 1,000 lbs to 1,600 lbs or more.  It doesn’t make sense to make a “one size fits all” horse trailer.  Instead, we match the trailer design to your horses so they are safe no matter their size.

Up until now we’ve only been discussing 2 horse trailers and 4 horse trailers.  What happens if you want a three horse trailer?  On a straight load, that becomes almost impossible without a significant design change, footage, longer wheel base, ramps, and cost.

On the SafeTack slant load trailer, we simply add another stall!  The same safety principles apply for loading and unloading.  In addition, we offer the reverse load feature and double side ramp which allows a handler to access either of the three horses for loading or unloading independently of each other.  Finally, box stalls can be created for hauling mare/foals.

There is No Significant Difference in Traveling Fatigue for Horses

As a final note, let’s look at how horses travel in both straight load and slant load trailers.  It seems when horses are traveling in a straight load they tend to balance themselves on both their front and rear feet equally.  It stands to reason fatigue is distributed more evenly on all four feet and legs.

When traveling in a slant load, the balance is shifted more towards the front right and left rear (depending on the direction of the slant).  So, if you are traveling a three-day nonstop journey from North Carolina to California, your horses may favor the front right and left rear from greater fatigue compared to the other two legs for a short period of time.  It’s sort of like waking up a limb that has fallen asleep.  Therefore, it’s possible in a slant for a horse to have a slightly longer recovery period from the haul than in a straight load.  (We emphasize the word “slightly”)

"For the majority of our clients, it’s rare for a horse to haul for more than 10 hours without stopping/unloading/stretching.   There doesn’t seem to be enough difference in performance to warrant an argument of "straight or slant" for the average user on a performance issue.  In fact, we hear from clients that haul from Florida to Kentucky non-stop in the SafeTack Reverse for competition and they rave about the low stress environment."

There is also research that supports the idea that horses hauling in a reverse configuration will experience less fatigue than a forward facing design.  Our patented reverse slant trailer design allows for more flexibility in deciding how your horses haul the best.