Home / Blog / You’ll Never Believe These Famous Celebrities That Love Horses!
Back to List of Topics

Hollywood actors often need to interact with horses in order to tell their story.  Did you know that some of these celebrities are doing more than just acting out a relationship with their equine co-stars?  Here are 13 celebrities who love horses, own horses, breed horses, or just can’t get enough of everything equine!

Viggo Mortensen is best known for playing Aragorn in the Lord of the Rings trilogy and Frank Hopkins in Hidalgo.  Did you also know that he is a huge horse lover who actually bought three of the horses he worked with on set?  In addition, he’s a strong advocate for wild mustang welfare and even published a book of horse photographs entitled The Horse is Good.

Viggo purchased his horse Eurayus after they developed a special bond during filming of the Lord of the Rings.  An article in HorseNation quotes him as saying, “I just developed a real good friendship with him…He kind of came into the movie similar to the way I did.  You know, didn’t have much preparation and was just thrown in and had to swim basically.  And it was rough on him and it took awhile for us to kind of get in sync and for him to be comfortable around the set.  So we got to be close and I wanted to stay in touch with him.”

The second horse that Viggo purchased is a chestnut gelding named Kenny that he rode in the beginning of The Two Towers.  “But he was very easy and relaxed and I just wanted Eurayus to have a buddy.”  When Viggo began filming this desert horse race thriller Hidalgo, he developed closeness to the main equine character in the movie, a 14.2 mustang stallion named T.J.  “He’s got such a unique, strong personality…He’s a small horse, but very intelligent, very quick learner, for a stallion very relaxed on set.” 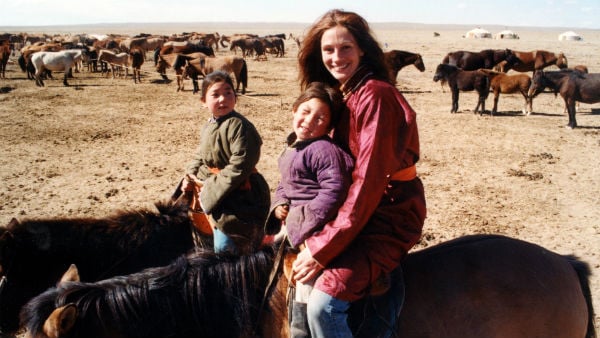 In the movie Runaway Bride, Julia Roberts rides off into the sunset with handsome Richard Gere on two horses.  In real life, she enjoys racing horses around a series of plastic barrels on her New Mexico ranch.  She picked up this skill in childhood and told People magazine, “My knees were always a wreck, but I was proud of them.”

Her passion for horses doesn’t end with barrel racing.  She actually traveled to Mongolia to host and film a documentary entitled Wild Horses of Mongolia.  She lived for several weeks among nomadic people to study their lifestyle and relationship with the wild horses. 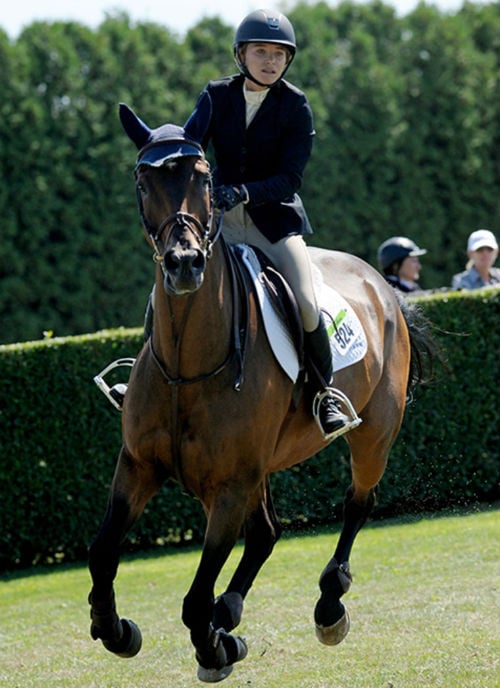 She’s a former child star from the hit series Full House, a fashion designer, an author, a businesswoman, and a talented equestrian.  Mary Kate Olsen regularly competes in stadium jumping horse shows like the 2014 Hampton Classic Horse Show in New York.  Who knew?

Us Magazine reported on this story and made a bit deal about her wearing “khaki riding pants, boots, a navy blue blazer, and an equestrian helmet.”  I bet most horse lovers were more interested in her excellent equitation, huge jumps, and handsome mount named Swagger. 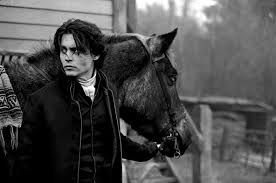 Johnny Depp is another male celebrity who has a soft spot for his equine co-stars.  After filming Sleepy Hallow with a one-eyed horse named Goldeneye, he decided to adopt the animal to save him from being put down.  His riding talents have been on display in other movies including Dead Man, Lone Ranger, and The Man Who Cried.

During filming of Lone Ranger, he was almost trampled when his saddle slipped while galloping over uneven desert terrain.  He explained to David Letterman, “I’ve ridden quite a lot in various movies and stuff.  You know… growing up in Kentucky you grow up around horses but every horse is different.  There was one moment in particular where it got unpleasant.” 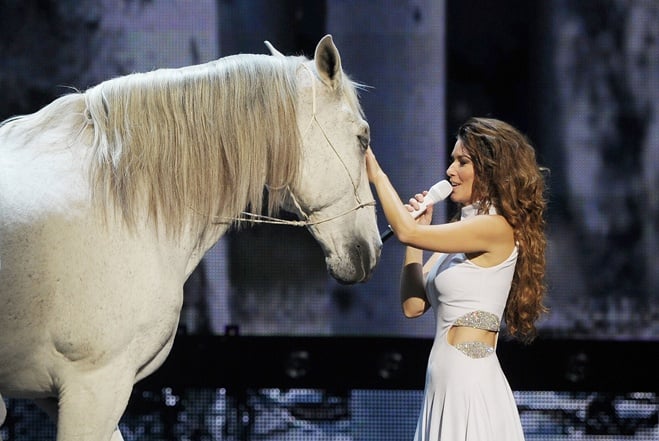 Shania Twain loves horses so much that she decided to include them in her live show at Caesar’s Palace in Las Vegas!  To promote the event, she rode with a herd of forty horses down the main streets of the city.  During a video promotion, she explained, “I’ve always wanted to include horses in my life as much as possible.  Once I was able to be around horses, I never wanted to stop…I’m living a dream by having them in my show.”

In front of a packed house of 4,000 people, Shania sings one song from atop the back of a grey horse.  This crowd favorite always draws gasps of awe when she first enters on horseback.  “There’s a trust that can exist between a man and a horse and that’s what I like to display during that number.” 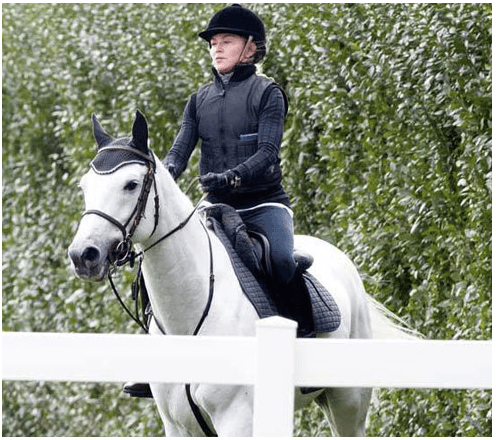 Madonna riding in the Hamptons in 2011.  Photo credit

The material girl is also a horse girl!  Madonna took up riding when she was in her 40’s during her marriage with Guy Ritchie.  On her 47th birthday she mounted an unfamiliar horse and suffered an accident where she broke eight bones in her body.  It took six months for her managers to allow her back in the saddle.  She eventually rode on the David Letterman show with David who is also an avid rider.  Today, she enjoys riding in the Hamptons during her free time. 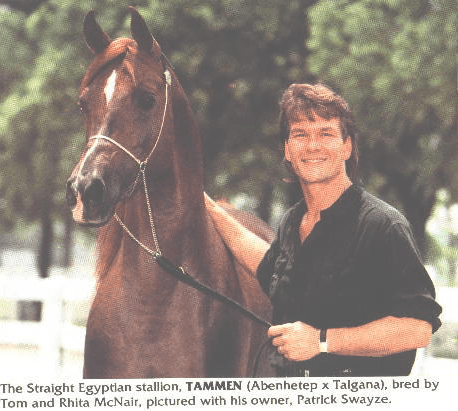 Patrick Swayze loved Arabians.  As reported by HorseNation, he loved them so much that he regularly showed them near his New Mexico home, earned his pilot’s license so he could fly to shows, was married to a horse-crazed wife, and ran his own breeding program started by his stallion Tammen.

He was asked by straightegyptian.com what it was that he liked so much about this breed.  He answered, “Their beauty.  I like the form of the head, the proud trot, and their harmonious physique.  Everything fits together and is in accord.  There is a natural balance in everything.  I am a dancer, and I can tell when a body is made with function in mind.  A healthy Arabian is built for function!  And that fascinates me.”  Sadly, Patrick passed away from pancreatic cancer in 2009.

She used to be a sweet and innocent star of Disney’s Hannah Montana TV show.  Today, she is a bold and spirited musician who is showing the world she is a grown woman with her own sense of individuality.  Growing up on her father’s estate in Nashville, TN, Miley developed her own love of horses.  Now that she has grown into a successful entertain, she was recently able to purchase the $5 million Hidden Hills Equestrian Estate outside of Los Angeles in May 2015.  The estate includes a 6,500 square foot ranch home, one-acre riding arena, two paddocks, and a ten-stall barn.  Not too shabby! 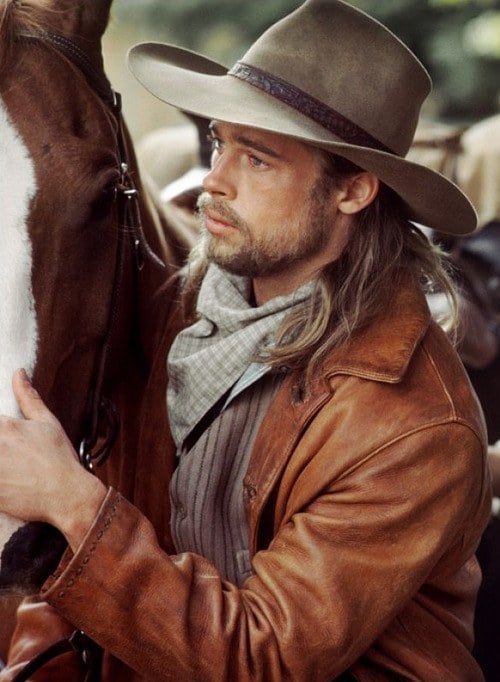 Brad Pitt is well known as a movie heartthrob and loving husband to wife Angelina Jolie.  Together, they have six children.  Six children need six horses, right? Of course!  That’s why he purchased six Shetland ponies and one horse in 2011.  Brad and Angelina, who already ride, are looking forward to introducing their children to horses in the coming years.

Horse and Hound magazine reported, “He wasn’t sure whether they’d find the time, as teaching the children to ride will take a lot of man hours but thinks it will be worth it in the long run….He thinks it’s best for them to learn to ride while they’re young.” 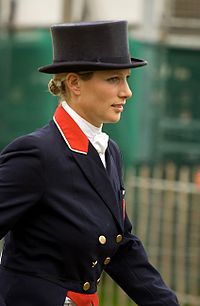 In Great Britain, the royal family members are celebrities to the English people.  Zara Phillips, grandchild of Queen Elizabeth and cousin to Princes Harry and William is an accomplished British equestrian.  Just like her parents before her, she has excelled in competitions at the highest level.  Some of her biggest victories include an individual gold and team silver at the 2006 FEI World Equestrian Games, gold at the 2007 European Eventing Championship, silver at the 2012 London Olympic Games, and team silver at the 2014 World Equestrian Games.  She competed in London on her horse High Kingdom and had the special privilege of being awarded her medal by her mother, Princess Anne. 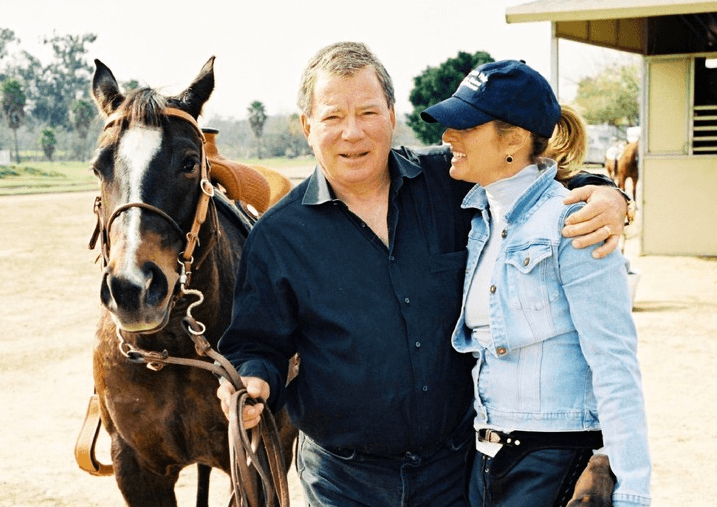 Star Trek’s Captain Kirk, actor William Shatner, first fell in love with horses as a young boy when he visited a rental stable near his home.  He told Horse and Hound magazine, “I remember going there all the time and having this kind of innate interest in riding, which I couldn’t fulfill at the time because of the expense involved.

Later in life, he learned to ride working on the film Alexander the Great.  He bought his first horse, a quarter horse, at an auction and kindled a love of both reining horses and Saddlebreds.  Eventually, he acquired a horse farm in Lexington, KY where he owns a famous Saddlebred stallion named Sultan’s Great Day.  His wife is also a horse lover.  He said, “She and I have won world championships on Saddlebreds, and I encouraged her to ride reiners as well, so we both ride competitively and occasionally against each other.”

Shatner explained that each of his horses has “little charming traits that we work on and try to eliminate, but at the same time it makes them individuals and I find it hard to play favorites.”  Besides showing and training, he is also well known for hosting a Hollywood Charity Horse Show annually in California.  Even Spock himself has been seen ringside!

Did you know that David Letterman is now an active rancher and conservationist in Montana?  This new lifestyle has become possible since he left his nightly role as host of the Late Show.  He’s enjoying his retirement but joked with the Hollywood Reporter that he’d like to do a new show on horseback.  “I would like to do this show maybe three days a week, two weeks out of the month,” he laughed.  It could be set in Montana and be called “Comedians on Horses Getting Coffee.”  In fact, Letterman has appeared several times on the streets of New York City riding with stars like Madonna and even Harrison Ford! 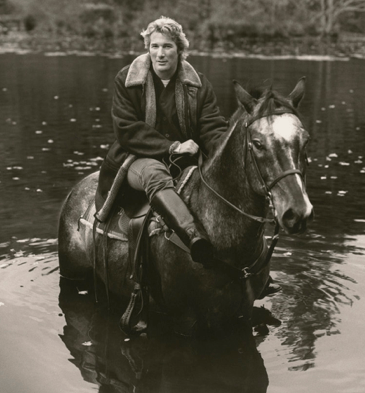 Remember when we talked about Julia Roberts riding off into the sunset with Richard Gere in Runaway Bride?  As it turns out, Richard Gere is pretty passionate about horses himself.  His breed of choice is the Appaloosa.  Horse Nation explained that he first fell in love with horses while working on the 1970s Broadway play, Killer’s Head.  He learned about the Nez Perce tribes and their relationship with the Appaloosa breed.

He’s ridden in several films including Sommersby, First Knight, and I’m Not There.  It was his Andalusian partner on the First Knight that taught him the most.  “I’d seen the horse first on tape, being ridden by this extraordinary Spanish rider, using no bridle and with his hands clasped behind his back…He was far too good for me, and it took quite awhile for me to ride him properly.  That horse taught me a lot.”

He bought his first Appaloosa, Drukpa, who became a lifelong partner.  “This big Appy follows me around like a dog.  First horses are like your first girlfriend.  You never forget.”  Richard owns a ranch in upstate New York where he rides with his family.  He is also highly involved in the Chief Joseph Foundation that promotes the preservation of the Nez Perce culture through community activities involving the Appaloosa breed.

Hollywood stars live busy lives making films and earning the big bucks.  It’s nice to see that some of them can take the time to appreciate the honest and pure joy of being with a horse!

Which celebrity horse lover surprised you the most?

Do you know of any other celebrities that ride?