Home / Blog / After Eight Years, Horse Rescue Wants to Reach Celebrities Portia and Ellen to Say, ‘Thanks!’
Back to List of Topics

After Eight Years, Horse Rescue Wants to Reach Celebrities Portia and Ellen to Say, ‘Thanks!’

It’s not every day that the humble workers of a horse rescue interact with the glamourous stars of Hollywood.  That is why we are thrilled to share the extraordinary story of the Coachella Valley Horse Rescue in Indio, California.  It was thanks to a generous celebrity donation seven years ago that this rescue was able to expand their one-year-old operation to save the lives of local horses and enrich the lives of the humans who care for them.  Now, after eight years of triumphs, trials, sweat, and smiles, they would like to connect with their beneficiaries to say a heartfelt ‘Thank you.’ 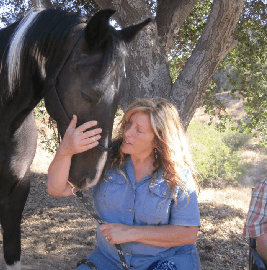 To learn about Coachella Valley Horse Rescue, we spoke with Rescue Director Annette Garcia.  She is a friendly and tenacious horse woman who has been an important leader for the organization.  “I just want to see it be great,” she explained during our phone conversation.  While she shared stories of the suffering horses in her local desert community, she also explained that the success of the CVHR is due to many big-hearted volunteers.  “Without donations, volunteers, and a passionate board of directors, we could not continue to save the lives of animals.”

These people are responsible for the ongoing operation and care of the rescue animals, but the two people who greatly helped improve and expand the rescue are none other than celebrities Portia de Rossi and Ellen DeGeneres.

Horses in the Desert:  Dealing With the Extremes 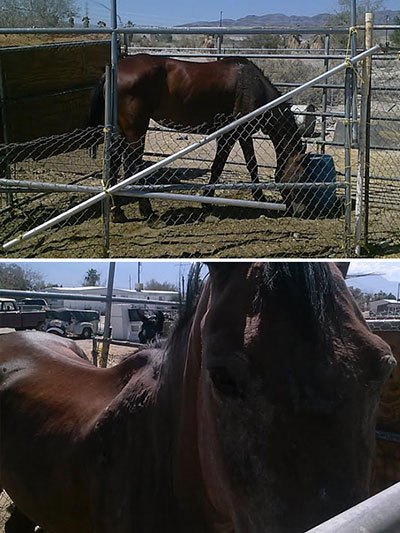 To understand why Portia and Ellen’s contribution made such a difference for CVHR, let’s first take a look at the daily challenges faced by the equine and human inhabitants of this California community.  Horses are not easily able to cope with desert environments.  Sadly, many horse owners in Indio are ill equipped to help them handle the scorching heat.  On days when the temperature can reach 124 degrees with little accessible shade, horses are in need of cool drinkable water, shelter from the sun, and protection from the ever constant flies that like to lay eggs in their eyes.

Annette explained that there are several hot days when they have to empty all 21 of the buckets for the resident rescue horses because the horses refuse to drink the high temperature water.  She explained, “Then, when we refilled them, the pipes are still so heated that the water comes out hot. We bring in large blocks of ice to put in the water  and it takes two to three blocks of ice per fifty gallon water bucket to make a difference.”

Annette and the CVHR rescue team have noticed that far too many horses in their community are living in deplorable conditions where they have no protection from the relentless sun, not enough feed, and inadequate water sources.  The lucky horses are rescued and placed on ranches like CVHR where they can be rehabilitated, retrained and adopted out to new and loving ‘forever’ homes.  The unlucky horses are either left to suffer, abandoned, or sold to buyers who ship them off to slaughter in Mexico and Canada.  It is an ugly operation that sadly continues at an alarming rate in our country.

“I worry about other horses in the community,” Annette explained.  She has been keeping her eye on a particular ranch that at one time had nine ‘skin and bone’ horses.   They had no shade, no fly protection, and limited access to water.  The horses could hardly turn around in their make-shift enclosures and their skin was covered in painful fly bites. “They were up to their knees in manure with dead chickens laying around the tiny corrals.”

Annette tried to help by giving the owners medicine, fly masks, and improved enclosures. She even arranged for a vet to drive 40 minutes to check the horses, but the owners did not keep the appointment. “It was a mess – a nightmare!”

Annette and her friends noticed a sharp up-swing in the occurrences of horse abuse and neglect after the economy took a turn in 2008.  More and more people were unable to care for their horses so the unfortunate animals were being dumped alongside the road or left to live without proper care.  It was stories like this that drove Annette to suggest to the Coachella Valley Mounted Rangers board of directors in 2008 that they start a horse rescue in North Indio, California. The Coachella Valley Horse Rescue was born…but boy, did they have a rough start!

How a Rescue Worker Started Chatting With a Star 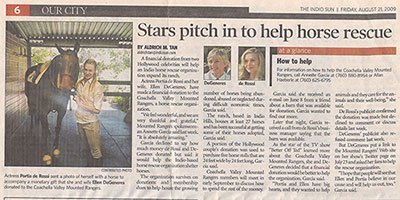 The land where Coachella Valley Horse Rescue resides is a plot of public land that is rented from the government.  For over 50 years, it has been the home of the Coachella Valley Mounted Rangers, a group of volunteer riders who helped with search and rescue operations and public events.

CVHR faced several challenges right from the start.  The facility had no hay barns, arenas, buildings, bathrooms, trees, lights, or even running water on their land.  After sunset, they were literally using flashlights to tend to the horses.  Some initial relief came when a nearby company called Granite Construction generously donated their well water to the ranch. 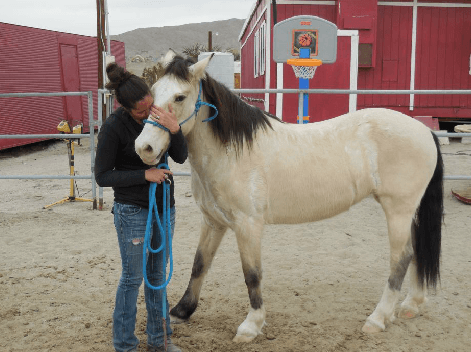 Still, other permanent structures were prohibited due to the nature of their lease agreement. (Above Image Credit:  The Indio Sun Newspaper, August 21, 2009, By Aldrich M. Tan)

In June of 2009, after just one year of struggling to operate the rescue, Annette received an email from a friend saying that she knew of a barn that was available for donation.  She responded to the advertisement and before long she was happily chatting on the phone with a very kind woman named ‘Portia.’  Annette used her self-proclaimed ‘gift for gab’ to share CVHR’s story and told Portia about their desperate need.

It wasn’t until she got off the phone that she realized that she had been talking to Portia de Rosse, star of TV shows like “Better Off Ted,” “Arrested Development,” and “Ally McBeal.”  Annette chuckled, “I was talking to her on the phone.  Thank goodness I wasn’t star struck!” 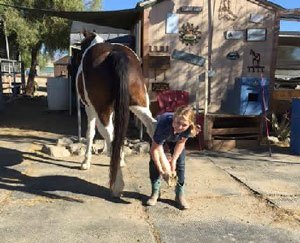 Portia de Rossi, famously married to comedienne and TV host Ellen DeGeneres, is a huge lover of horses and was touched by CVHR’s story.  She and Ellen very generously decided to make a monetary donation to the Coachella Valley Horse Rescue to help them with their cause.  This donation meant a world of difference for Annette, the CVHR team, and most importantly for the rescue animals.  “It got us started!”

Annette happily explained how this donation, along with other smaller public donations given right after allowed them to install structures with bathrooms, lights, plant trees, create shaded areas, build an arena for turn-out, and improve their rescue work. 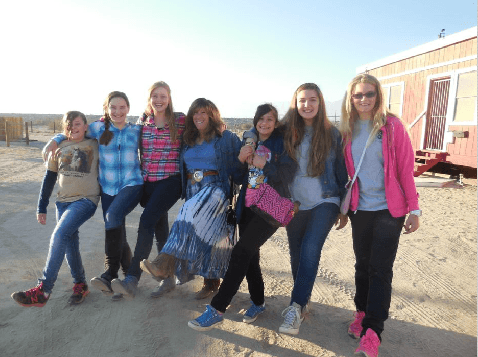 In the last eight years of operation, CVHR has made a great impact on the lives of many equines who have been given a second chance at life.  They have also saved and rehabilitated two goats and many dogs that were abandoned in the desert near the ranch.  It would seem any nearby animal in need is a target for their compassion and care.

The lives of the rescue volunteers have also been greatly affected by their time at CVHR.  Novice ranch volunteers are always told, “Horses don’t care how much you know, but they know how much you care.”  The current number of volunteers stands at 27 and is full of smiling faces and sweaty brows.  They help instill confidence in horses who arrive with infections, scars, protruding ribs, overgrown hoofs, and a distrust of humans. 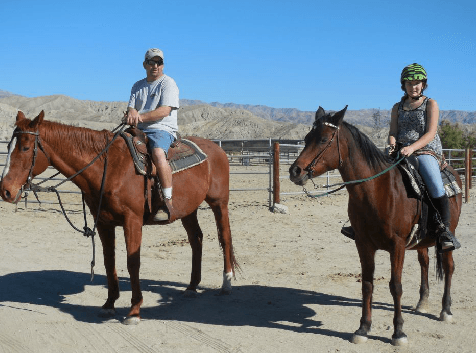 In a short video about their rescue, volunteers can be seen placing kisses on the soft muzzles of grateful horses, feeding treats, riding around, and playing with the horses using large equine balls.  An adorable mini horse named Oreo Cookie can be seen freely exploring the grounds to the delight of the visitors.  Kids of all ages along with many adults have learned the ropes of horsemanship by working with the rescue horses.

For some, the bonds created are so great that they end up adopting the horses into their very own families.  It is quite obvious that the heart and soul of this organization lays in the people who spend day-after-day caring for the animals without any promises of pay or fame. 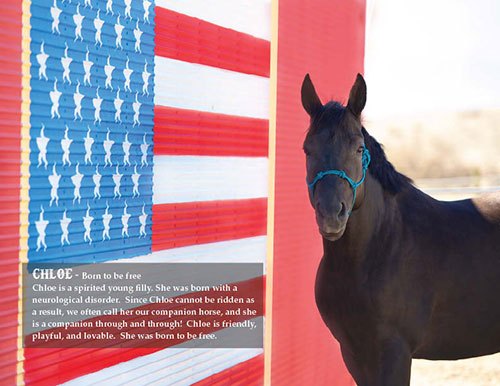 Besides rescue work, CVHR also provides special educational programs to youth, including Boy Scouts, Girl Scouts, and other community groups, so they can learn about horses and proper equine care.  Several Boy Scouts have earned their Eagle Scout badge by contributing to the rescue. They have helped with the construction of hay barns and the painting of a very large American flag mural that perfectly expresses CVHR’s patriotism.

If full-sized horses are a bit too much to handle, CVHR has several sweet and loving miniature horses available for horse community service events to help build confidence for those afraid of larger horses.  Finally, CVHR has hosted field trips for children on and off the ranch and participated in local fundraisers for Special Needs children and adults where they get to see ‘smiles all day long.’

The Future of Horse Rescue Work in Indio, California 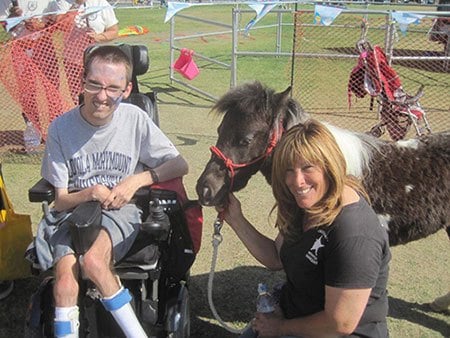 In the future, CVHR President Dave DiMeno, Annette and the rest of the board would like to expand their youth program to include more hosted field trips. This way, they can teach local high schoolers about animal cruelty prevention.  They also hope to offer financial assistance to kids who could not otherwise afford horseback riding lessons.  Programs for the local YMCA, Big Brother and Sisters, Boys and Girls Club, and other local non-profit organizations are also on CVHR’s radar, but only if they can secure air conditioning in their buildings to protect the youth from desert temperatures.

CVHR has done some amazing work over the last several years but we would be remiss if we did not draw some attention to their ongoing struggles. It is a problem seen in horse rescues across our nation.  They do everything they can to rescue and rehabilitate horses in need, but with limited funds, they can only do so much. 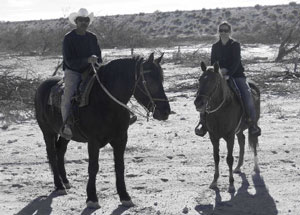 Annette says, “It is heart wrenching to not be able to reach out to more horses in the community that are living in desperate and horrific conditions.”  She said several times that they cannot risk becoming “a rescue that needs to be rescued” without continued financial support.  At the moment, their greatest needs are money for feed, veterinary support, and volunteer workers.  They also want to find a stock 4 horse trailer for sale to transport their animals.

Despite these hardships, they face each day with a positive attitude.  Annette explained that, “If you point your nose the right way, your horse will go in that direction.”  She feels strongly that this can apply to your life as well.  Just keep your eyes focused on where you want to be and life has a way of taking you there.  “We are very blessed.”

So to Portia and Ellen, Annette and the Coachella Valley Horse Rescue want to say:  Because of your generosity, we were able to expand our horse rescue and save all of these lives.  We continue to do so eight years later.  We would love to have you both tour our facility where you can see first hand how your generosity has forever changed the lives of not only horses in need, but all those volunteers whose lives have been touched by the ranch. Thank you so much! 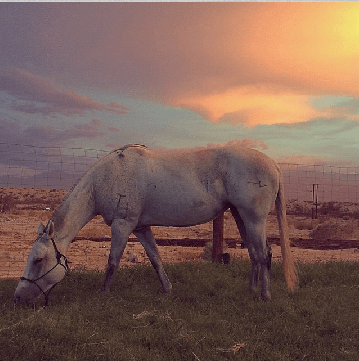 To learn more about horse rescues in our nation, check out our Horse Rescue Corner Database.

Discuss:  We'd love to hear what you think about this story!  Please share below.