Home / Blog / Safetack® Slant Load Horse Trailer: A Revolutionary Design With Superior Safety and Convenience
Back to List of Topics

Disaster struck in 1999 when a Raleigh, NC woman was loading her trailer.  Her usually reliable gelding walked onto the conventional slant load trailer past the rear fixed tack compartment into his stall.  The woman, unable to squeeze into the narrow space beside her horse, walked around to the side of the trailer to reach in to secure his halter.  Without warning, her horse reared back and snapped her arm. The need for a better design was clear and the folks at Double D got to work creating the Safetack® slant load trailer.  It’s a trailer design unlike any other found on the market!

Eliminate the Tight Squeeze of a Conventional Fixed Storage Area

A typical slant load trailer configuration has a narrow rear door for loading and a fixed tack storage area in the back corner. “There’s really not enough room with a conventional style rear tack for you and your horse to get up inside,” Brad Heath explained.  “It is really problematic and creates a huge safety hazard for the person loading the horse.” 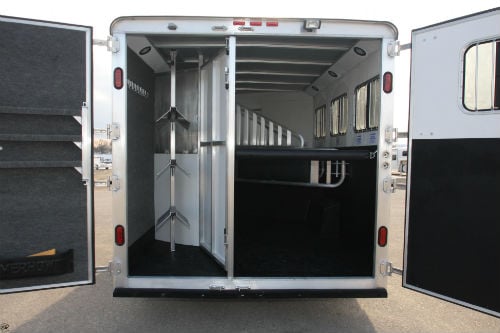 A typical slant load trailer has a stationary tack area on the rear corner of the trailer.  This creates a narrow "hallway" effect for the horse when they are loading on the right.  In addition, a butt bar or strap is the only thing keeping the horse on the trailer besides the rear door.

After hearing of their customer’s accident, Brad and his partner at the time, his father, got to work on a solution.   His father came up with the  “Tack-Around” design in 1999 that eventually was trademarked as “Safetack®” in 2011.  “It’s the same concept, but over the years we’ve made a few changes to make the usable space of the trailer as functional as possible.”  The Safetack® technology is available on both bumper pull and gooseneck horse trailer varieties.

Safetack® technology is a superior design for all slant load horse trailers because it is much safer for both the human and the horse.  Once the tack storage compartment has been swung out, it is possible for you to enter the trailer with your horse though a wide-open space rather than the narrow door in most slant load designs.   “Horses are so unpredictable, so you always want the maximum amount of space, in case you need to get the heck out of the way,” Brad described. 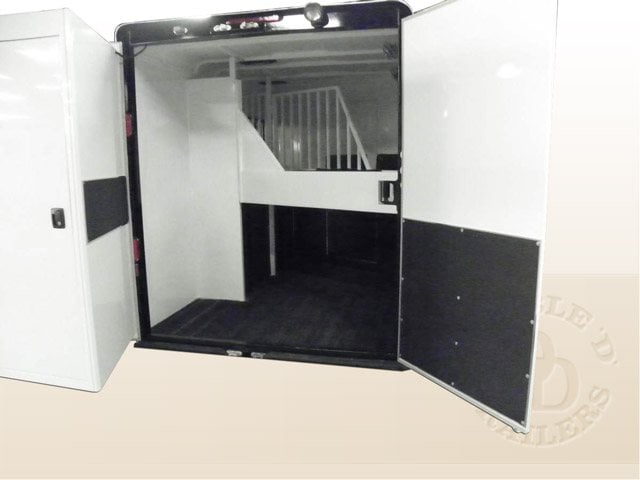 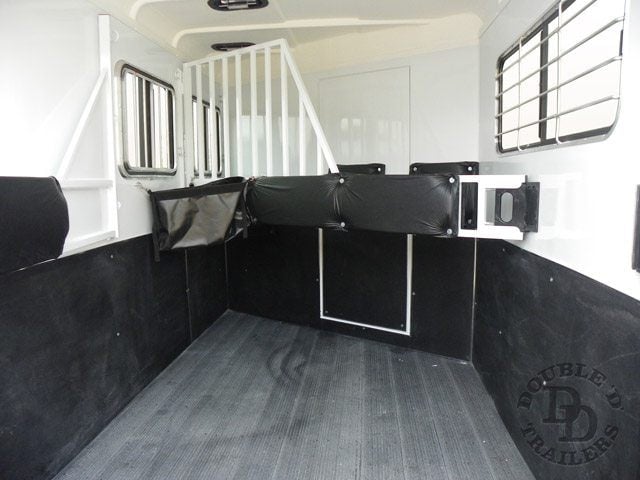 In a Double D Trailer Safetack® model, the tack area is swung out like a second door allowing for a wide open area for loading.  This is much more inviting for a horse.

Next, this design eliminates the need for a butt bar or strap.  “Horses can sit down on these.  We’ve seen horses get cut before,” Brad cautioned.  “You could seriously get injured, if not killed, from a horse’s kick.  It is a huge safety hazard for the owner to drop in those butt bars or straps.”

Instead of a rear butt bar or strap, the Safetack® slant load trailers have an extra rear divider.  This allows you to secure your horse and then walk up to their head to secure their halter without a dangerous squeeze around the tack area.

This rear divider is also handy when unloading your horse.  Typically, when you first open your trailer after a long trip, the horse wants to back out right away.  “They’re like kids who want to get out after a long trip!” Brad chuckled.  “With this design, you can swing the compartment out of the way and access the horse’s head, get them calmed down, and then open the partition.  You always have a way to escape if the horse spooks.”

Along with the safety benefits, the Safetack® slant load horse trailer design can actually help horses who are nervous loaders have a more relaxed trip.   Horses are naturally claustrophobic animals and a conventional slant load with its narrow door is their worst nightmare.  “Many horses don’t like to load in that small narrow confining space,” Brad said.

In comparison, the Safetack® slant load trailers provide a wide-open space for the horse.  “All of the trailer is open so you could easily walk horses in and walk them out.”  This system is much more friendly and easy for a horse and often helps turn a nervous and stressed animal into an easy loader.

Nervous horses like the Safetack® a lot more because it feels much less claustrophobic.  It's safer for the horse and human handler. Here's a video of what it's like to load with the SafeTack Reverse option with a side ramp and door:

Owners of Safetack® horse trailers find that their horses are much happier with the new configuration. Linnea Kerins of Dora, MO shared, “We are pleased to say when we trailered our horses in a Double D, the stress type signs were not present so it was easy to make the decision to purchase another, and come back to the Double D Trailer for our horse hauling needs.  Also, I would say from a horse owner’s point of view, the added attention to safety that goes into a Double D and the great design of the Safetack are huge selling points.   Teaching our young horses to load with the wide-open back to the Double D, has made their loading and unloading experience much better.”

Carl and Sandy from Peoria, IL wrote, “We chose this Safetack trailer for our horses much more than for us, but we love it as much as they do!  The second slam gate is something I never want to live without again.  It is so great to be able to load the horses and not have to shut up the back because the last horse isn't secured with a gate.   Also, we trailered our young Friesian mare a couple of times over the winter.  With our previous slant-load trailer, this horse who will do anything the first time we ask was absolutely terrified to back out of that trailer, even though it was a well known brand aluminum trailer.  It was dark, high off the ground, had a solid stall divider, and we had to try to get her to angle around the rear tack to unload.  She got to the point where she was really worried in that trailer.  I was concerned that her negative trailer experiences would cause a long-term problem that would be difficult to help her get over.  I am so happy to say that she loves "her" new trailer!  She loads and backs off like a dream, and travels quietly - mission accomplished.”

Brad added, “A lot of what we hear is ‘Wow!  I’ve never seen this before!”  Even people who are initially thrown off by the unfamiliar design eventually decide that they love it and they have to have it.  “We’ve had an overwhelmingly positive response.”

A New Way to Store Your Tack and Equipment

The swinging storage compartment is unlike anything else you will find in the horse trailer industry.  Double D Trailers put a great deal of extra work into creating a strong hinge system that can handle the weight of the compartment. This is a common concern with new buyers, but they have no reason to worry.  “We been building these since 1999 and we haven’t seen a hinge problem yet, so we feel pretty comfortable in saying that it’s not an issue.” 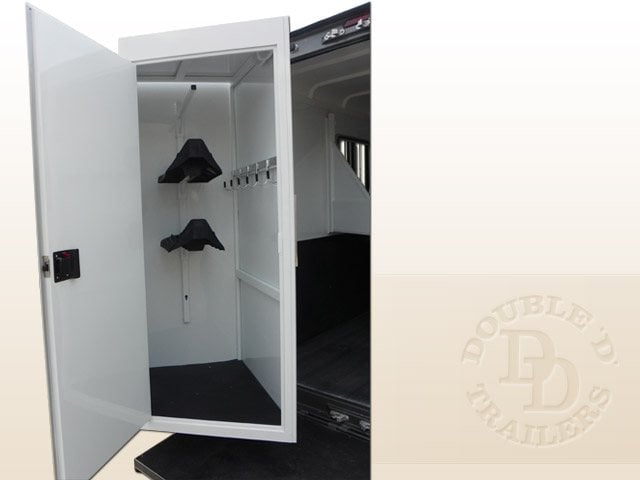 The Safetack® compartment can be secured in the open position.  The entire area has built in lighting, equipment racks, is lockable, and has moisture control.  It's full enclosed so you can throw loose articles like brushes and boots onto the floor without fear of them rolling under the horses' feet.

The tack storage area is well balanced so that you can open the compartment easily even when it’s fully loaded with equipment.  You can latch it into the open position before opening the door to access your tack.  The compartment is completely enclosed so you can throw loose brushes or boots onto the floor area without any worry of losing equipment.  There are several saddle racks mounted on an adjustable bar so you can adjust the height or add additional racks.  Bridle and blanket racks are also present.

The tack storage area has a light that is controlled by a rear switch and can be locked using your master trailer key to keep your tack secure.  The storage area is also well ventilated to prevent build up of moisture or mold.

How Does Safetack® Compare to Competition?

In truth, there is no competition because no other manufacturers have similar designs.  “Safetack is exclusive to Double D Trailers.  We were just awarded a patent on the Safetack® Reverse Slant Load, which uses the same technology, where the horses load from the front and the side.” 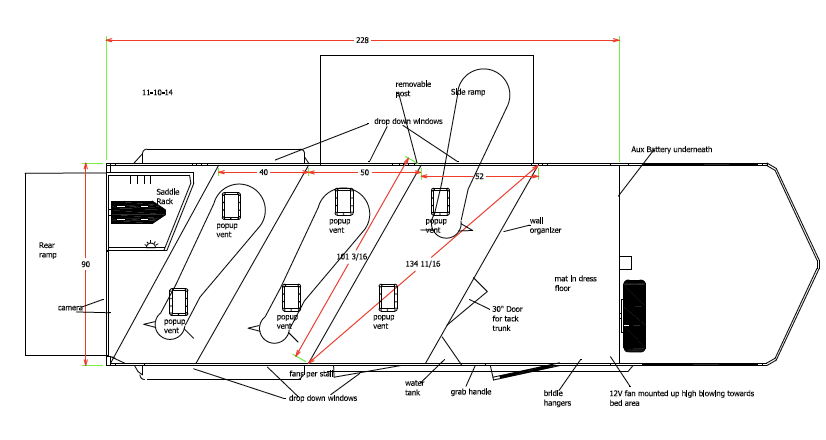 Some manufacturers do offer a collapsible saddle compartment.  Still, this design is much less convenient.  “The last thing we want to as an owner to do is clean out a saddle compartment, get everything off the floors so you can collapse the walls.  It really isn’t practical!”

Is It Time For You to Make the Switch?

If you are interested in one of the Safetack® slant load trailers from Double D Trailers, don’t hesitate to reach out to Brad Heath through the Double D Trailers website.  You can describe your wishes, needs, and budget and Brad will work with you to design a custom horse trailer.

DeeDee of Livingston, Montana wrote, “After a lot of research, I'm convinced they are building the best and safest built trailers on the market, with a lot of thought and attention to detail put into their trailers. In addition, Brad offered the best customer service by far in comparison to folks I talked with both at Sundowner and Featherlite trailers.”

If you are looking for the convenience of a slant load trailer without the common safety hazards, definitely check out the Safetack® designs from Double D Trailers.  This technology revolutionizes trailer design offering a much better option for horse and owner so you can safely enjoy your trailer.

Do you currently have a Safetack® trailer?  How do you like it?

Do you have any stories to share of a conventional slant load trailer with its narrow squeeze?