Trailer Stories: When Your Horse is Terrified to Back Off a Trailer 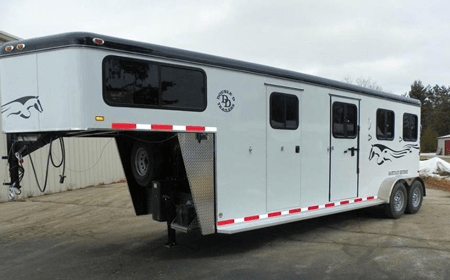 Every Double D Trailers customer has a unique history that leads them to purchase one of our horse trailers.  For Bonnie, from Pilot Point, TX, her story begins with a terrified young mare who didn’t do well on a conventional slant load horse trailer.

Her horse was so terrified to unload from the trailer that she would rush out backwards in a total panic.  We spoke to Bonnie about her experiences and learned how a new SafeTack horse trailer made a world of difference for both her and her horse’s safety.

Previous Trailer Experiences:  “She came outta there like a ROCKET!”

“The trailer I had before this one was a three horse Four Star slant aluminum with a non-collapsible rear tack,” Bonnie explained during a recent phone interview.  “Some people refer to those as birth canal type trailers, because they're narrow in the back.”  She chuckled a bit at this.

Over the years, Bonnie had used this trailer and its narrow entryway to teach around twenty horses to load and unload safely.  She said that the small loading door posed some challenges. (See photo below for an example of a conventional slant load trailer with a narrow rear loading door.)

“Yeah, it takes a little bit longer, because you’ve got that narrow passageway, but generally speaking, I've been able to get the job done and then haul faithfully.”

When Bonnie purchased a four-year-old Lusitano mare from Virginia, her loading luck finally ran out.  “I took her through the same process of trailer loading and getting her comfortable in my trailer,” she explained.

You see, Bonnie takes her time to train a new horse and lets them become comfortable with the new experience step-by-step.  She also drives very sensibly when hauling her animals.  The only problem lay with her old trailer’s dangerous and narrow rear doorway.

“I was at the point where it was time for me to shut the gate and go someplace, if that makes sense. I shut the door behind her numerous times over a series of days.  She was doing well enough and relaxed enough in there that I felt like it was time to go somewhere.”

“So instead of just shutting the gate and driving to a friend's house and unloading her in unfamiliar surroundings, I thought the best thing to do would be drive around the block and let her unload in a place she's familiar with, which is home. So that's what I did.”

“First time she unloaded, she came outta there like a rocket! I mean like a rocket backwards!”  Bonnie had hoped another try on a different day would make a difference.

“Well it never got any better with her. And she even progressed to where she could tolerate, after we stopped, the door being open. And she wouldn't blast out. But as soon as she took one step backwards to commit to backing out, it was rush and blast out.”

Her mare was suffering from a problem not uncommon for horse owners.  The animals are terrified to back out of the trailer and compensate by rushing to unload.  In this situation, the horse or any nearby handlers are in danger of getting injured.

One time her mare hit the side of the door frame while rushing backwards and gave herself a hematoma.  It took six months for her to heal.

Still, Bonnie kept working with her mare and consulted with her trainer for extra advice.  She also practiced backing her up and down hills and over landscape timbers scattered on the ground.  Bonnie worked with her mare so she would feel comfortable stepping over things.

“Eventually she could back through that 30 foot of landscape timbers one foot at a time. I could stop her anywhere I wanted to and go forward backward, forward backward, whatever I needed to do, calmly. I could get her to back over the railroad ties calmly. Stop wherever I wanted her to, with any foot I wanted. And she could do all of that.”

“But I never could get her to be able to back out of that trailer safely.”

Unloading from her Double D Trailer:  “It was just fabulous!” 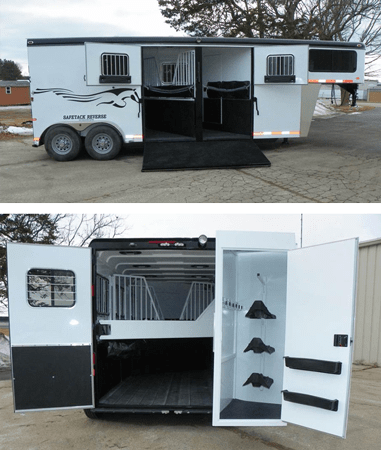 After months of struggling, Bonnie finally said, "The heck with it, I'm gonna have to buy a new trailer!"

Bonnie admitted that she is get “a little older” and that trailer safety is now more important to her than ever before in her life.  She said, “When you're dealing with a horse trailer, it can be incredibly dangerous. You've got to be very much on the ball and on your game and not let your mind wander.  You’ve got to be on task all the time, whether you're driving or loading or unloading.”

She continued, “If you've got a trailer like the Double D that gives you the luxury of having that extra room, it's priceless when it comes to a safety standpoint. Particularly as I get older.”

The SafeTack’s “walk-through” capability means that her horse never needs to back off a trailer again.

“She now can unload from that trailer one foot at a time. Halfway in, halfway out. I can stop her halfway and back her back in or let her go forward or whatever. She's very calm and relaxed through the whole thing. And she adjusted to it immediately. It was just fabulous!”

Forward or Reverse Facing Options:  Load Whichever Way is Best for Your Horse

Bonnie’s trailer is a SafeTack Reverse 3 Horse Gooseneck Trailer with a forward or reverse facing option.  It has a double wide side ramp that lets the handler load from the side and walk their horses into a rear facing stall.  From there, they can offload by walking straight off the rear of the trailer. 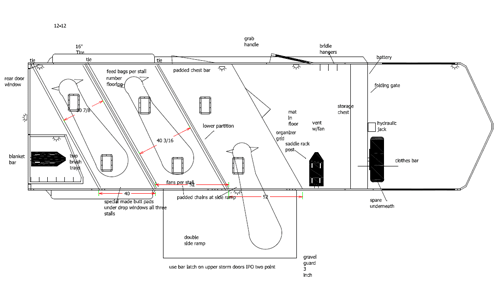 Or, if the owner prefers, they can load from the back and walk into a forward facing stall.  Then, they can offload by walking their horses forward off the side ramp.

“I'm hauling her forward facing, even though the trailer is set up for either forward or reverse facing.  I absolutely love the flexibility of that.”

“I liked the idea of hauling backwards,” Bonnie explained.  “I've read over and over again that the reverse load is the way they would choose to haul if they were able to do so themselves.”

After she received her new SafeTack reverse horse trailer, Bonnie slowly began working with her mare on this new trailer.  She chose to practice loading the mare in the forward facing direction at first.  “I load from the back, I just walk her up from the back myself. I'd get in the trailer and she follows me right in.”

For this mare, the real test came when it was time to unload…

“It was the exit that was the problem… When I get to wherever it is that I'm going, then I unload her through the double side ramp. And that's allowed me to do one step, literally one step at a time.”

“What I'm doing now is I load her from the back, she steps up easily on the load part, and then I unload from the double side ramp and it is smooth as silk.”

“Now, as she is unloading, she can stop with two hind feet on the ramp and graze!”

This calm unloading horse is a huge transformation from the terrified mare we met in the beginning of this article.  The horse never needs to back up so that anxiety and need to “rush and panic” is completely gone.  For Bonnie and her mare, the Double D Trailer’s unique SafeTack design made all of the difference.

Other Things to Love on a Double D Trailer 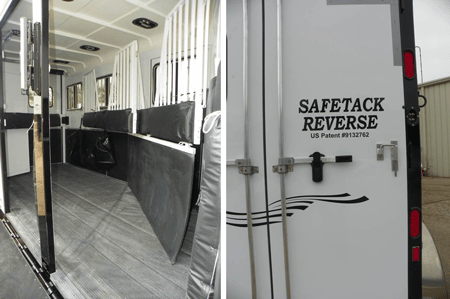 Before we ended our conversation, Bonnie shared a few more things that she really likes about her new 3 horse slant load trailer.

“I absolutely love that last divider. Because I've never been a fan of butt chains, butt bars, all that kinda stuff. Heard way too many accidents happening with that.”

She is referring to the final full sized Z-Frame divider that secures the rear most horse.  Instead of a butt chain or bar, this divider snaps into place and allows the handler to safely approach the horse’s head to untie their halter and secure a lead line for unloading.

“But, the way they have that designed, the placement of it, the size of it, is perfect. A horse is not gonna challenge it. So I just think that's brilliant.”

She also had positive things to say about the trailer design process with Double D Trailers owner Brad Heath.

“It was just fine. I wrote emails asking my questions, and then his reply on those emails was color coded and detailed and very good.  I cannot make any suggestions of improvements, 'cause I think it was great.”

“I thought he was very patient. He gave, as far as I was concerned, plenty of detail. I was very, very happy with that. I thought it was great.” 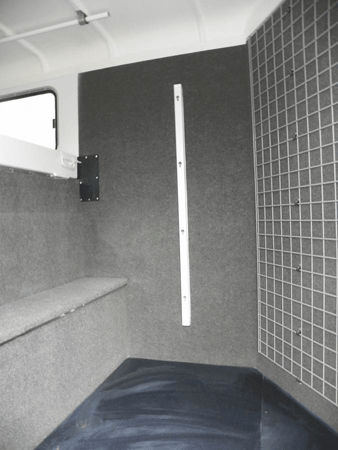 Bonnie also liked the flat rate nationwide shipping policy.  “I thought the $395 shipping for anywhere in the country was fabulous!”

Finally, the storage on her SafeTack horse trailer has worked well for her equipment.  She uses her mid-tack storage room to store most of her equipment.

“I got the grid thing on there, on that bulkhead wall, which I absolutely love.  I'm detail oriented, so I get a chance to put things where I want them, and I got lots of room up there. My mare's well enough behaved that I can easily hang on to the end of the lead rope and jump up in there and get whatever it is I think I need.”

She actually uses the rear SafeTack compartment to store her hay, but explains that she may use it for tack one day in the future.  Her favorite thing about the SafeTack compartment is how it is able to swing out completely like a second door leaving a wide open space in the rear of the trailer for loading and unloading.

Now that she has her new trailer, Bonnie and her young mare are able to load and unload calmly and safely.  They can travel together for dressage lessons and clinics.

She summed it up, “LOVE LOVE LOVE my new trailer! Will be a part of my horse life for many years to come! Thank You! It is a great trailer!”

If you would like to learn more about how a SafeTack horse trailer can help your horse learn to load and unload more safely, check out some more articles here.  Or, you can get started designing your own new trailer by contacting Brad.