“Oh my gosh, it's the best money I've ever spent!” 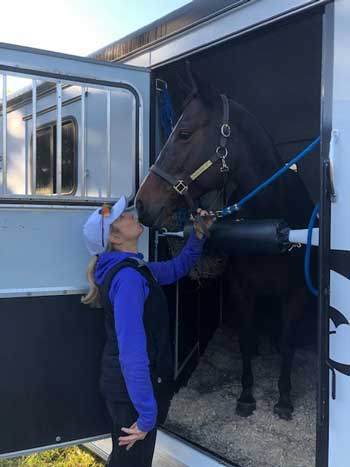 Penny from Ohio has six wonderful horses who she loves with all her heart.  But, when two of the animals consistently gave her trouble loading onto her old horse trailer, she knew it was time to make a change.

Her solution was an easy one.  She learned about the SafeTack Reverse Load trailer from Double D Trailers and watched her loading routine transform.  What used to be a long ordeal of pulling, pushing, and begging turned into something quite different.

We had the pleasure of interviewing Penny to learn about her experiences buying one of our custom horse trailers. Read her story and watch the video below to see her once “trouble” horses who now load with ease onto the SafeTack Reverse trailer.

Hi Penny and thanks so much for taking the time to chat with us!  Can you tell us what it was like to load your horses on your old horse trailer?

Yeah, so I have six horses — two that were the hardest to load.  One is the only horse that was born on my farm. She was 8-years-old before I really took her anywhere.

She went for training and it was always a bad experience.  She really thought the trailer was a bad thing.  The first time I put her on my old trailer — a Sundowner — I took the middle divider out and she pushed her butt up against the main door.  And broke it!

We had to turn around and go back.  It took us like 2-hours to get her into the trailer that time.  It was just really, really hard to get her on the Sundowner trailer.  Sometimes, I couldn’t even do it!

Then, there’s Ed, my daughter’s horse…

About 2-years ago, he trailered and he wasn’t good.  It took us sometimes a half hour to get him on… it took a lot of encouragement, butt straps, pulling him. Then, he finally would get on.  He just didn’t like getting on it.

Once, we went to a clinic and he went to back out, but we didn’t take the butt strap off.  He thought it was off, but it wasn’t so he reared and busted through it.  Then, he fell.

So, he had a really bad experience in a two horse trailer like that. 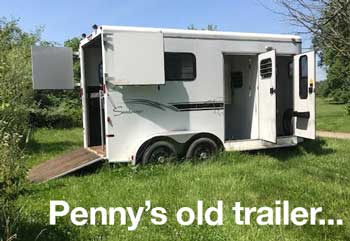 With my other horses… none of them really liked to load.  It was just always really hard for whatever reason. I’ve been a horse person all my life.  And, I’ve had lots of trainers who said some horses are good at it and some aren’t.

I had big plans to do a whole bunch of stuff with the horses.  We missed so many shows because the horses wouldn’t load.

It was not good.

Then, I kept seeing a Facebook post that showed your trailer and had the complete side open.  That’s what I needed! I needed something like that where my horse doesn’t feel as closed in.

When I saw the SafeTack Reverse, I thought, “Oh man, this is the way to go right here!”

I just felt like we had a better shot at walking on into a large opening on the side, as opposed to pulling them up and backing them off.

Can you tell me how you normally load your horses onto your new SafeTack Reverse trailer?

Most of my horses are big.  The one you saw loading is by far the smallest.  She’s probably 15.2 h, but she’s fat as you can see.  Her mom was an off-the-track-Thoroughbred and her dad’s a Holsteiner (German Warmblood.)

The last one is our newest. He’s a Palomino. He’s 16 hands, but he’s very stocky. I actually worried when I got the trailer because he loads easy, so I take him in first.  But that last stall is the smallest stall, and he’s not the smallest horse.

But, he fits right in!  He fits in the stall perfectly and he loads no problem.

My trailer is only rear-facing. To load, they enter from the side and then go towards the rear.  They exit off the back.

Once you got your new trailer, what was it like to load your horses? Did they take some time to warm up to it or was it pretty much easy right from the get go? 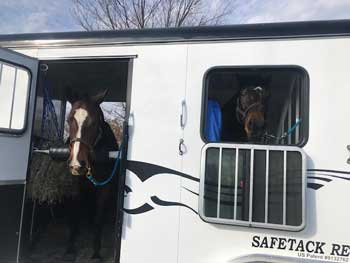 It was almost easy right from the get go. What I thought I'd do is just put it where they could see it, in my backyard.

Then for a couple of days I walked them out, opened it and showed it to them.

I took one of the easy loaders and I just walked them through it and we just walked in a circle.

Wow, that's fantastic! Have you noticed a change when they're actually going somewhere? When they get off, do they seem calmer?

I didn't really think much about why they hated it on there so much… besides the trauma of getting on or getting off.

But then I talked to Brad and read about the product.  That’s why I chose the Rumber flooring.  I thought, “Of course! It’s probably super uncomfortable in there as well.

It might be hot or cold on their legs, or on their feet.”

I live in Ohio.  Sometimes we would trailer and it would be 90 degrees outside! So, it was probably burning hot on their feet.

Before, I would get somewhere and the horses would just be calling and trying to get out of the trailer quickly. Now, they just don’t seem to be that uncomfortable. 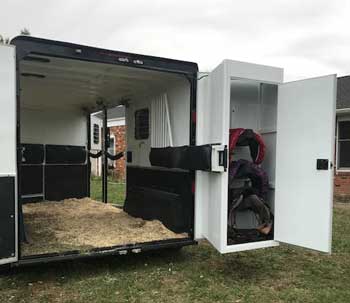 They’re not stressed out when we get to where we’re going.  It’s such a difference!

What made you decide to finally buy a custom trailer from Double D Trailers?

I didn't want to spend that much money on a trailer. When I talked to Brad, I was just kind of getting some information. I was going to do it in a couple of years, save up a little money and splurge and get the one I wanted.

But oh my gosh, it's the best money I've ever spent!

It's crazy. My life is totally different!

My husband and I go trail riding now every weekend.

There’s a place that's about five miles down the road from us that's just beautiful and I didn't go there for 10 years. I just couldn't get my horses off the back.

Now, we go every weekend. And sometimes on a nice day, we get off work a little early, we'll go for a ride after work.

That’s fantastic!  Now, can you tell me a little about the design and buying process with Brad?

It was super easy. I enjoyed it.

We just picked what we wanted.  It was fun!

We sat down with my kids and my granddaughter, who rides with us, and we all made our big wishlist.

Then, we figured out how much it would cost and we decided what we really wanted to keep. We sent that to Brad and he contacted me back right away every time.

He made some suggestions that were really good.  I was going to try to save some money, like on the hydraulic jack, and he goes, “Penny, you don’t want to do that.  You really don’t.” 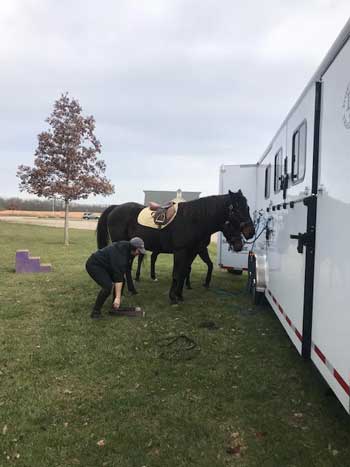 He was right! It was the best because I can hook up this new trailer by myself. I can back my truck right up in there and hook it up myself.

It’s crazy, I could never do that with my bumper pull. Boy, my husband's actually jealous because I can hook it up in like five minutes, but it takes him way longer.

Wow! And what about the SafeTack compartment in the rear? Is that something you’re getting a lot of use out of?

Oh yeah. I think it would have been even better if I had the forward and backward facing trailer.

That always seemed so stressful when they were backing out of the two-horse trailer.

It’s not that I’ve got much of an ego about it, but anywhere we go… it was almost like we’re the side show.

We hear, “Oh my, look at their trailer!”

Awesome. That is wonderful to hear. I'm so happy to hear you're enjoying the trailer and your horses are liking it. Thank you Penny!