How One Woman Gentled a Wild Mustang in Just 100 Days

Alex Crenshaw is passionate about the mustang breed.

That is why she entered the 2017 Extreme Mustang Makeover even held in Massachusetts.  She was given just 100 days to tame and train a completely wild unbroken mare named Sita.

We had the pleasure of interviewing Alex about her experience.  Here is her story…

Why is the Extreme Mustang Makeover competition important for the Mustang breed? 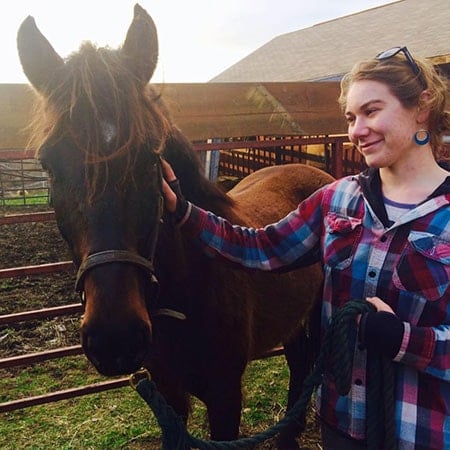 This competition is all about raising awareness for mustangs and to show people how versatile they can be….mustangs get treated like the mutts of the horse world.

My own extended family has told me that they are worthless and not worth having around. I completely disagree. I think that a mustang has more common sense, raw talent and extreme ability to trust than any other breed I have worked with.

If that isn’t recognized, then these overpopulated horses could wind up being sent to slaughter. As it is, there are over 40,000 horses in holding facilities out west with at least that many more still in the wild.

Due to decreasing land availability, it is necessary to find homes for these animals so they don’t live out their days in small holding pens and pastures. Competitions and events like these show people how amazing mustangs are and encourage them to support a very important cause.

Can you tell us about your background with training horses?

I’ve been lucky enough to grow up with horses throughout my entire life. My parents adopted our first two mustangs when I was less than 2 years old and we still have one of them to this day. Some of my earliest memories are of our mustang gelding, Hawk, nuzzling the top of my head with his gigantic lips.

I grew up riding at home, in lesson programs and at a few shows. I mostly enjoyed eventing, hunter paces, and endurance racing. When I was around 12 years old, I began training lesson horses at a riding program that my mother ran. It was also a boarding school so I literally lived on the farm. I sort of joined the staff in helping train horses, guide trail rides and teach lessons. That’s probably when I fell in love with training.

Over the next 6 years, I trained my own horses as well as taking on a few clients here and there. I mostly started young horses - at least, that was my favorite thing to do. Then, I got caught up with school and really didn’t work with horses again until I decided to enter the Extreme Mustang Makeover (EMM).

What made you decide to enter the Extreme Mustang Makeover competition?

I had heard about the EMM through the documentary ‘Wild Horse, Wild Ride’ which showcases many of the trainers throughout their 100 day journey. It was the kind of training challenge that I dreamed of doing but never imagined I would actually be able to pull off.

But I attended an event in Springfield, MA called Equine Affaire and discovered a booth for the Mustang Heritage Foundation. There I learned that the Makeover was coming to Massachusetts and by some miracle, I pulled together the necessary elements to make it happen.

Your assigned horse was a mare named Sita.  What were your initial impressions when you first met her?

I was impressed with Sita right off the bat. After loading her into the trailer, she had to ride 6 hours to get back home. It was a long, exhausting journey but she traveled perfectly. She seemed wary of all these new things but never overly fearful - just cautious. We arrived home in the dark on a frigid night and nearly got stuck backing our trailer up to the arena entrance.

Upon opening the doors to the trailer, I thought she would jump out and be a little crazy but that was not at all the case. She slowly sauntered out of the trailer and walked calmly into her new arena - cautious but mostly unconcerned. Over the next few weeks, Sita continued to demonstrate this calm, calculated demeanor in everything I did with her.

What was it like to train Sita during your 100 days?

Sita was both a joy to work with and incredibly challenging at the same time. Her initial calmness made me think that progress would be quick and easy but I was definitely wrong about that. Sita had spent 6 years in a holding facility so I think some of her calmness came from previous experience being around people. But her comfort stopped there. 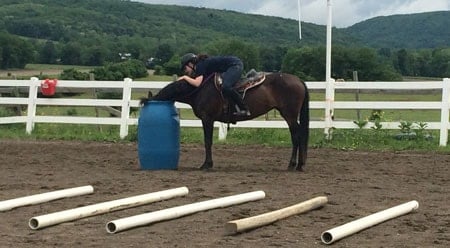 As soon as I worked on approaching her, she would not have it. It took me about three weeks to be able to consistently approach and touch her. But as soon as I did, it was like night and day. Within a week of touching and handling her, I was brushing, picking all four feet, and even putting weight on her back. As soon as she realized that my being near her wasn’t the worst thing in the world, she turned into a giant puppy dog.

She was extremely curious and loved exploring the barn, surrounding woods, and nearby trails. On her 3rd ride, we trailered to a local trail system and went for a walk in the woods accompanied by my old experienced mustang, Hawk. She was fantastic and seemed to love every minute of it.

Towards the end of our training time, I hosted an event for people to come meet Sita. She had throngs of people around her and was not a bit concerned (except about whether or not they had treats for her). She even walked up a set of steps and hung out under a giant tent so that we could be close to the people! I’d say that was a pretty good indication of her personality.

What are your most memorable moments of working with Sita?

Some of the most memorable moments in my mind are from the very beginning of our training. There were many days when I just went into the pasture and sat next to her hay pile. A little patience resulted in her coming over to check out this lump near her food. Those were some of the first times she touched me - just nuzzling me with her nose.

Another (very different) training experience happened much later in our time together - at around 80 days. I moved Sita to a new facility with an indoor obstacle course setup. I had previously exposed Sita to as many new things as possible but I simply didn’t have access to many of these things before now. So in one day, Sita learned about pool noodles, barrels, a curtain made from garden hose pieces, and man-made bridges.

The actual competition was exhilarating and EXTREMELY stressful. Part of the stress was simply that it was a new experience for me. I had trouble getting to the competition so I didn’t get to attend the trainer orientation and operated the rest of the weekend on a severe lack of sleep.

But besides all that, I was so impressed by how well Sita did. Many of the other horses had the opportunity to be in a facility like this (or even this exact one) before the competition whereas Sita had only been to a few different locations. And nothing nearly as terrifying as a giant hockey stadium with thousands of clapping audience members.

After we got over some of the initial stress and confusion, Sita was fantastic. She was a little frightened when we entered the obstacle course but I got off and soothed her and we completed each obstacle perfectly from the ground. Of course, it would have been nice to do it under saddle but I knew that just wasn’t happening on that day and she did her very best considering. For the flat class, we placed in the top 10. Even though we didn’t make it to the top ten overall, I’m very proud of Sita and our performance during the weekend.

Two other horse/trainer combos that I admired were Brittany Mayer & Winnie and Sam Vanfleet & Malibu. Brittany Mayer did a fantastic job and I was continually impressed by how athletic and ambitious she and her horse were. Sam Vanfleet did an amazing job with her gorgeous horse, Malibu - and she’s only 18! Very impressive.

What’s next for you and Sita?

I would love to do this competition again. Unfortunately, funding has been pulled and the Mustang Heritage Foundation is no longer able to host a Makeover in Massachusetts. Whereas there were 11 EMM events in 2017, there will only be 2 in 2018 - one in Kentucky and one in Texas.

So I won’t be able to participate until the competition comes back east. But in the meantime, I have become more committed to working with mustangs and am actively working toward having a facility to train and rehome mustangs throughout the year.

Sita went to a wonderful family near Boston, MA. She is used primarily as a 4H pony and is ridden by kids and adults ages 4 and up. I think this is perfectly suited to her and am excited to have found such an amazing next home for Sita. I plan to visit her this coming summer.

What are your hopes for the breed after people read your story?

At the bare minimum, I would like for readers and for the general public to become more aware of this issue. Everyone I talk to is astounded to learn that there are so many wild horses and that their land is rapidly decreasing. It’s a huge issue and the more people know about it, the more they can take action to protect these horses.

Of course, if you’re able, adopting is a great option - there are even programs (like TIP) sponsored by the government wherein trainers are paid to being the training process with mustangs so that they can be adopted with a little bit of handling. That first step is often the hardest for people so it’s great that there are opportunities for trainers and adopters to work together to tackle that hurdle.

In the least, if you can’t adopt a mustang of your own, spread the word about their plight and donate to groups like the Mustang Heritage Foundation who are working so hard to find homes and opportunities for these animals.

To learn more about the plight of the mustang, check out MustangHeritageFoundation.org.

Also, check out our state-by-state list of horse rescue organizations here.  There are thousands of horses within our nation who are in need of loving forever homes.