Home / Blog / Horses in Danger: The Need for Horse Rescues in the United States
Back to List of Topics

Horses in Danger: The Need for Horse Rescues in the United States

Several years ago, we came across a photo of a very determined little gelding.  He was stubbornly pulling back on his halter with all of his might while his handler tried to lure him onto a bumper pull horse trailer.  We contacted the owners of the photo and learned that the gelding, Phoenix, was a resident of a horse rescue in Washington state.  Our interest grew as we learned more of his story and about the facility where he lived. 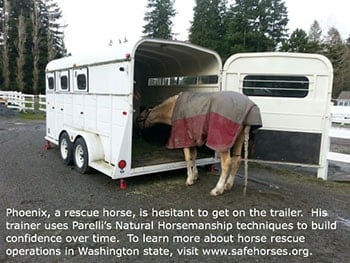 Since then, horse rescues have had a special place in our hearts here at Double D Trailers.  It became clear to us that horse rescues were not getting the attention and support they deserved.  We decided to take action and created the Horse Rescue Corner database to help tell the stories of the many organizations who are working for change.

“There are thousands of horses within our nation who are suffering from abuse and neglect,” explained Double D Trailers owner Brad Heath.  “It only seemed fitting that we try to do something to help bring attention to those people who take it upon themselves to help these animals.”

Why Are Equine Rescues Needed?

Depending on what corner of the equine world you spend most of your time, the issue of horses needing to be rescued in the United States and Canada may be a foreign concept.  In fact, thousands of horses in our nation are not given the treatment they deserve.

They are under-fed, under-watered, under-medicated, left alone for long periods of time in poor conditions, and sometimes even cruelly abused by their owners.  Many of these animal are seized by animal control services or the local government. Their owners are often charged with animal cruelty, which can be classified as a felony in all 50 US states.

Sometimes horse owners think they are doing well by their animals when in truth they are not.  Annette Garcia of the Coachella Valley Horse Rescue in California told us about many owners in her community that don’t provide enough shade and cool drinking water to accommodate horses in the 124 degree temperatures.  Rather than a slap on the wrist, these owners need education and resources to help provide for their animals.

Even irresponsible backyard breeding plays a role in this problem.  Bonnie Hammond from SAFE Horse Rescue in Woodinville, WA explained that it is important for people to have a plan for a foal’s entire life before choosing to breed a mare.   “Foals are amazing.  They’re beyond adorable, but they grow up into 1200 lb animals that need a lot of care and a lot of space and we end up with so many horses that are unwanted due to backyard breeding.”

The Horse Slaughter Industry in the United States

But the problem is bigger than just irresponsible and ignorant horse owners.

Nikki Branch of the Falcon Ridge Equine Rescue talked about when she first learned about horse slaughter. “In shock, I searched the web and found out approximately 150,000 American horses are slaughtered each year and their meat exported to countries like Japan, France, and Belgium.” (These stats were for the year 2014)

This means that even horses from loving homes who are responsibly sold to new owners have the potential to end up in auction houses.  Here, meat buyers look at the horses not to decide if they have good conformation and riding potential, but to determine how many pounds of meat they will produce and how much money they will bring in for profit.  Once purchased, they are crowded onto cramped horse trailers, often given very little water, and taken out of the country for processing. 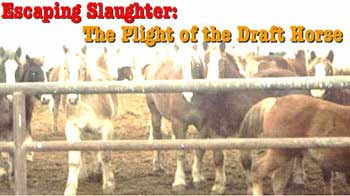 Some types of horses have it worse than others.  Draft horses, for instance, are particularly attractive to meat buyers because of their shear size.  Discarded Amish plow horses in Pennsylvania and Ohio are easily sent to auctions where they are fast-tracked up to Canada.  Christine Hajek of the Gentle Giants Horse Rescue (a draft horse rescue) in Maryland said, “Draft horses, pound for pound, are fleshier and more lucrative for sale at slaughter.  Literally, you get more ‘bang for your buck.’”

Hopefully the problem doesn’t get even worse.  Our current U.S. Representatives are poised to vote on a new bill that may once again allow tax payers money to be used to fund slaughter of horses within our borders. (Click here to take action against this bill.) 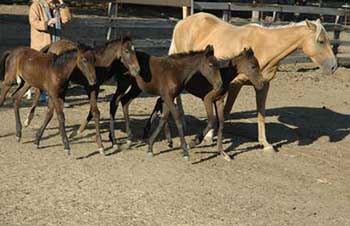 There are other industries that benefit from the exploitation of horses.  Take, for example, the pharmaceutical industry.  PMU (pregnant mare urine) mares are kept cruelly confined in stalls so small that they cannot turn around and can only move one-step in any direction during almost constant pregnancy.

During that time, they are hooked up to tubes so their urine can be collected for use in drugs like Premarin.  This cycle goes on for around 12-years until the mares are no longer able to get pregnant.  Many of the foals born from these mares are either used to replace their worn out mothers or sold at auction where they end up in the hands of meat-buyers.

In the racing industry, nurse mare foals are those young colts and fillies who are born simply so their mothers could come into milk.  The foals are discarded while the mothers are used to nurse more “expensive” foals.  The unwanted foals are often killed, allowed to starve, or their hides given to tanners to create Cordovan leather products.

Pedigree Won’t Save a Horse from Troubled Times

While creating the Horse Rescue Corner, we have learned many heartwarming stories of animals that were saved after being at the brink of death’s door. Horses of all types have been saved by rescue organizations.  Most are non-profit groups that operate purely on donations and fund-raising efforts.  Almost all are run by volunteers with the goal of horse adoption.

We’ve learned that ANY horse can fall upon hard times and be in need of rescue.  Pedigree and performance will not protect them from hard times.

The Orphan Acres Rescue in Idaho told us about their horse named Lil Blue McGoo who once starred as one of the lead horses in the movie Dances With Wolves.  It seems Hollywood stardom wasn’t enough to protect this gelding.  He was brought into the rescue years later with open sores all over his body, severely malnourished and a huge abscess on his jaw.  Orphan Acres was able to rehabilitate him and provide a loving home until his eventual death at 29 years of age. 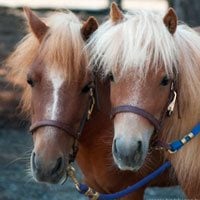 Several of the rescues we talked to had horses with very impressive bloodlines.  A grandson of Seattle Slew, Champion Arabian mares or stallions, one granddaughter of Secretariat, and hundreds of other horses with real potential if they were only given the training and care to excel.

I Want to Help:  Is a Horse Rescue Near Me?

For any lover of horses, these stories are heartbreaking and infuriating.  Luckily, our country is also home to hundreds of kind and loving workers who make it their mission to save as many horses as possible.  They help people like you adopt a horse and change a life.

>>Yes!  I want to find a horse rescue near me so I can help make a difference.

Check out Part II of this article where we talk more about the awesome potential of rescued horses.  They can be truly outstanding riding partners if they are just given the chance. We’ll also share more information about how you can take action and get involved with a local rescue near you.

>>Read Part II of this article:  Rescue Horses: Awesome Horse Adoption Potential and How to Help